Poland is calling for the European Union to wean itself off of Russian oil and gas – and turn to alternative suppliers such as Canada – in order to keep Moscow from using energy prices as a weapon in its escalating conflict with the West.

Polish Foreign Minister Radoslaw Sikorski also said that this week's deployment of 150 U.S. paratroopers to his country was a necessary message to Russian President Vladimir Putin that "NATO territory is sacrosanct." Earlier this month, he called for 10,000 NATO troops to be deployed to Polish soil.

Mr. Sikorski's comments – made ahead of a meeting Thursday in Warsaw with Canada's visiting Foreign Affairs Minister John Baird – came as the Ukrainian government escalated its military effort to oust pro-Russian separatists who have taken over strategic locations in several cities in the southeast of that country.

Ukrainian authorities said that as many as five pro-Russian fighters had been killed during an operation to retake three checkpoints that the separatists had built on roads leading to the city of Slavyansk, which has been at the centre of the armed rebellion. Mr. Putin, who has warned he could send his military into Ukraine to protect the country's Russian speakers, said on Thursday that the military action a "serious crime against [Ukraine's] people."

With a Russian invasion of eastern Ukraine growing as a possibility, Mr. Sikorski urged the NATO alliance to "get back to basics" after 15 years of post-Cold War "illusions." That means bolstering the alliances defenses against a resurgent Russia that claims the right to protect Russian speakers beyond its borders.

"We listen carefully to what President Putin says, and he seems to be very frank in his intentions. What he says he wants to do is something that all of Europe should be concerned about, because every European country has national minorities, and we have learned over the 20th century that changing borders by force to protect them leads to hell," Mr. Sikorski said in a joint interview here with The Globe and Mail and Maclean's. "Therefore this kind of ideology is a threat to everyone."

The 51-year-old Mr. Sikorski emphasized that Poland had played its role as a NATO and American ally by sending troops to both Afghanistan and Iraq, and now expected to see a strong commitment to the country's own security.

While Poland joined NATO in 1998, there are still no alliance troops permanently stationed in the country, out of concern about aggravating Russia, which shares a border with Poland via its Kaliningrad exclave.

"Poland sent a brigade to both Iraq and Afghanistan, but we always did it on the basis of an implied bargain. We will send you expeditionary forces the more we feel secure at home. And now that the expeditions, the main expeditions, are ending, we need to get back to basics. In response to events that have proved that whereas it's still true that conflict inside the European Union is unthinkable, conflict outside the European Union is not only thinkable, but seems to be growing," said Mr. Sikorski, who in a previous career as a foreign correspondent covered the Soviet Union's own war in Afghanistan.

"We should firm up the red line that is treaty-based. Namely that NATO territory is sacrosanct. NATO territory is out of bounds for, sort of, post-Soviet or neo-imperial irredentism," he continued. "We need to, belatedly, make NATO security guarantees credible."

Mr. Sikorski denied that he was effectively abandoning non-NATO members, such as Ukraine, to defend themselves against Russia.

He said that preparations were already underway to apply further punitive sanctions against Moscow should Mr. Putin send his troops across the Ukrainian border.

"If Russia invades – of course it will be called humanitarian intervention or peacekeeping, pick your anesthetic – but if Russia does go in, we will reluctantly have to impose further sanctions. And I say reluctantly because I know it will be politically and economically painful. Much more for Poland than for Canada," he said.

He acknowledged that Moscow seems to have been prepared to face economic sanctions when it initially moved into Ukrainian territory, seizing the Crimean Peninsula following a disputed referendum there last month.

"I agree that we are behind the curve of what they expected. But I still think Russia underestimates how integrated she already is with the global economy, and how the sources of her wealth depend on trade and goodwill of, particularly, Europe."

Mr. Sikorski said it was imperative that Europe now reduce its reliance on Russian energy.

"We should play to our strengths. Our strength is the fact that Russia needs our money more than we need Russia's oil and gas. Because we have other suppliers, like Canada, like Norway, that give us a more competitive price, with no political strings attached. We should concentrate on creating – at least in Europe – an energy union that will make the internal EU market for energy more competitive, and more capable of helping one another."

Mr. Sikorski said Canada was a natural partner for Europe because of the Canaport liquefied natural gas terminal near Saint John, which allows large volumes of North American gas to be shipped across the Atlantic Ocean to Europe. "We should welcome every development which makes democracies produce more energy and thereby makes us less dependent on autocracies," he said, adding that Canada had been "one of the more principled countries" during the Ukraine crisis.

Poland, and Mr. Sikorski, have played a prominent role throughout the Ukraine crisis. Mr. Sikorski helped mediate the Feb. 21 agreement between pro-EU protesters and the Moscow-backed government of Viktor Yanukovych.

Mr. Sikorski was caught on video warning protest leaders they should accept the pact or "you'll have martial law, the army, you'll all be dead."

Mr. Sikorski says he made the remarks – which came a day after more than 100 people were killed in clashes between police and protesters in Kiev – after learning that a brigade of the Ukrainian army had been transferred to the Interior Ministry in preparation for a larger assault on the protesters camped in the centre of the Ukrainian capital.

While Russia has been calling for a return to the Feb. 21 agreement – which would have left Mr. Yanukovych in office for several more months – Mr. Sikorski said the deal had been voided by Mr. Yanukovych, who refused to sign a law restoring Ukraine to its previous constitution. Mr. Yanukovych has since fled to Russia, which still refers to him as Ukraine's legitimate president. 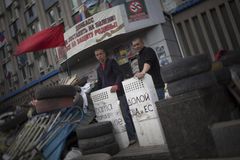 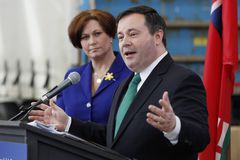