Over the 41 days of his murder trial, Oscar Pistorius has been painted with multiple faces: Olympic celebrity, sorrowful boyfriend, hot-tempered gunman, weeping witness. Now his lawyer has added a surprising new portrait, comparing the athlete to a fearful victim of domestic violence.

The contradictory versions of the enigmatic "Blade Runner" will soon be resolved. With the closing arguments now finished, Justice Thokozile Masipa is preparing to deliver her verdict on Sept. 11, deciding which of the portraits she believes. If the judge finds that he deliberately killed Reeva Steenkamp, she could put the Olympic double-amputee athlete into a South African prison for life.

The latest version, offered on Friday by defence lawyer Barry Roux, was so provocative that Justice Masipa had to interrupt Mr. Roux to check whether that was really what he wanted to say.

The defence lawyer, who has a penchant for the theatrical, argued that Mr. Pistorius fired the four fatal gunshots through a bathroom door because of a "primal instinct" that snapped within him after many years of a "slow burn" of anxiety, fear and trauma.

Among domestic abuse victims, the "slow burn" is caused by the prolonged trauma of the violence that they suffer, but Mr. Roux argued that Mr. Pistorius suffered a similar kind of "slow burn" from the vulnerability and insecurity caused by his double amputation, which left him unable to walk properly on his stumps. When he pulled the trigger to shoot a perceived intruder, it was a reflexive reaction to his accumulated fear and anxiety, just as a battered woman might finally do, Mr. Roux said.

This prompted a storm of outrage in South Africa's media. The analogy was "strange and rather inappropriate," said South African journalist Rebecca Davis, writing on the Daily Maverick website. Justice Masipa is unlikely to be impressed by the analogy, since she is a respected advocate of women's rights, Ms. Davis said.

The multiple faces of Mr. Pistorius have been a constant theme of the murder trial since its beginning in early March. It was stated most explicitly by a clinical psychologist, Jonathan Scholtz, after a 30-day court-ordered psychiatric evaluation of Mr. Pistorius. In his report, Dr. Scholtz diagnosed a "split" in his personality, leading to the construction of "the two Oscars" within him.

"The one Oscar being an international superstar, more confident and feeling more in control at 1.84 metres tall," said a portion of the report, entered as evidence in the trial. "That part of him falling back on his physicality and 'never say die' attitude that had served him so well … The other Oscar being a vulnerable and fearful disabled person, at less than 1.5 metres once his prostheses were removed and he was alone at night. That part of him falling back on to his anxiety and fear, not feeling in control."

But these were not the only "Oscars" that emerged at the trial. A third Oscar was described by estranged friends, who said he had laughed arrogantly after shooting his pistol through the open sunroof of a car as it raced down a road near Johannesburg. They also said he had angrily berated a policeman who had grabbed his pistol after stopping the car for speeding.

There was also the Oscar of the notorious "Zombie Stopper" video, where Mr. Pistorius fires his pistol at a watermelon and gleefully compares the melon to human brains, calling the bullets a "zombie stopper." Confronted with this video during the trial, Mr. Pistorius initially claimed that he didn't remember the phrase, before finally admitting that the man in the video was him.

Then there was yet another Oscar on display: the one who wept dramatically and vomited into a courtroom bucket to express his grief over the death of Ms. Steenkamp whenever he heard graphic details of her demise.

On Sept. 11, Justice Masipa must decide which of these Oscars is closest to the truth. 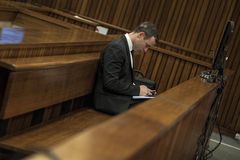