In an extraordinary gesture both political and personal, Pope Francis brought 12 Syrian Muslims to Italy aboard his plane Saturday after an emotional visit to the Greek island of Lesbos, which has faced the brunt of Europe's migration crisis.

Refugees on the overwhelmed island fell to their knees and wept at his presence. Some 3,000 migrants on Lesbos are facing possible deportation back to Turkey under a new deal with the European Union, and the uncertainty has caused heavy strains.

Francis decided only a week ago to bring the three refugee families to Italy after a Vatican official suggested it. He said he accepted the proposal "immediately" since it fit the spirit of his visit to Lesbos.

"It's a drop of water in the sea. But after this drop, the sea will never be the same," he said of his gesture, quoting one of Mother Teresa's phrases.

During the five-hour trip, Francis implored European nations to respond to the migrant crisis on its shores "in a way that is worthy of our common humanity." The Greek island just a few miles from the Turkish coast has seen hundreds of thousands of desperate people land on its beaches and rocks in the last year, fleeing war and poverty at home.

The pope visited Lesbos alongside the spiritual leader of the world's Orthodox Christians and the head of the Church of Greece. They came to give a united Christian message thanking the Greek people for welcoming migrants and highlighting the plight of refugees as the 28-nation EU implements a plan to deport them back to Turkey.

Francis insisted his gesture to bring the 12 refugees to Italy was "purely humanitarian," not political. But in comments on the flight home, he urged Europe to not only welcome refugees but better integrate them into society, so they are not left in ghettos where they can become prey to radicalization.

Many refugees wept at Francis' feet as he and the two Orthodox leaders approached them at the Moria refugee detention centre on Lesbos, where they greeted 250 people individually. Others chanted "Freedom! Freedom!" as they passed by.

Francis bent down as one young girl knelt at his feet, sobbing uncontrollably. The pope also blessed a man who wailed "Thank you! Please Father, bless me!"

The Vatican said the three Syrian families, which including six children, who came to Rome will be supported by the Holy See and cared for initially by Italy's Catholic Sant'Egidio Community. They were treated to a raucous welcome Saturday night in Rome, with drummers thumping, a crowd applauding and the three mothers receiving a single red rose.

"I thank you for what you have done," Nour, a mother of a 2-year-old, said of the pope. "I hope this gesture has an effect on refugee policy."

Nour and her husband, Hasan, are both engineers who lived in Zabatani, a mountainous area near the Lebanese border that has been bombed. Another family with two children hailed from Damascus and a third family with three children came from Deir el-Zour, a city close to the Iraqi border that the Islamic State group has been besieging for months, leading to malnutrition.

She said the three families had been given Italian humanitarian visas and would now apply for asylum. Francis said they were selected not because they were Muslim, but because their papers were in order. They had arrived on Lesbos before the EU deportation date.

"It's a small gesture," he said. "But these are the small gestures that all men and women must do to give a hand to those in need."

In perhaps a first, a baby's cry could be heard aboard the papal plane as Francis spoke. The 12 refugees sat right behind the papal delegation on the aircraft, and Francis greeted each one on the tarmac in Lesbos, again on the tarmac in Rome, and during the flight, said Pompei.

Francis seemed particularly shaken by the trauma the children he met at the detention centre suffered as a result of their experiences. He showed reporters a picture one Afghan child gave him of a sun weeping over a sea where boats carrying refugees had sunk.

Hundreds of migrants have drowned so far this year in the waters between Greece and Turkey.

At a ceremony in Lesbos to thank the Greek people, Francis said he understood Europe's concern about the migrant influx. But he said migrants are human beings "who have faces, names and individual stories" and deserve to have their most basic human rights respected.

"God will repay this generosity," he promised.

In his remarks to refugees, Francis said they should know that they are not alone and shouldn't lose hope.

Human rights groups have denounced the EU-Turkey deportation deal as an abdication of Europe's obligation to grant protection to asylum-seekers.

The March 18 deal stipulates that anyone arriving clandestinely on Greek islands since March 20 will be returned to Turkey unless they successfully apply for asylum in Greece. For every Syrian sent back, the EU will take another Syrian directly from Turkey for resettlement in Europe. In return, Turkey was granted billions of euros to deal with the more than 2.7 million Syrian refugees living there and promised that its stalled accession talks with the EU would speed up.

During the visit, Francis, Ecumenical Patriarch Bartholomew I and the archbishop of Athens, Ieronymos II, signed a joint declaration urging the world to make the protection of human lives a priority and to extend temporary asylum to those in need. It also called on political leaders to ensure that everyone can remain in their homelands and enjoy the "right to live in peace and security."

"The world will be judged by the way it has treated you," Bartholomew told the refugees. "And we will all be accountable for the way we respond."

Francis and the two Orthodox leaders, officially divided from Catholics over a 1,000-year schism, lunched with eight of the refugees to hear their stories. They then went to the island's main port to pray together and toss floral wreaths into the sea in memory of those who didn't survive the journey.

Earlier, Francis met Greek Prime Minister Alexis Tsipras at the airport and thanked him for the generosity shown by his people despite their own economic troubles. Tsipras said he was proud of Greece's response when other European nations "were erecting walls and fences to prevent defenceless people from seeking a better life."

Hours before the pope arrived, the European border patrol agency Frontex intercepted a dinghy carrying 41 Syrians and Iraqis off the coast of Lesbos. The refugees were detained.

The son of Italian immigrants to Argentina, Francis has made the plight of refugees, the poor and downtrodden the focus of his ministry as pope. 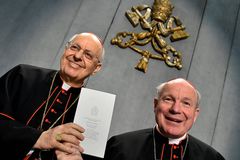