The man in the mask, sitting atop a captured armoured personnel carrier, had a simple explanation for what happened here Wednesday: The government in Kiev dispatched its army to uproot the pro-Russian militants who were in control of this gritty factory city in southeastern Ukraine. But the people of this region forced the soldiers to desert their vehicles and go home.

"The government sent the military to kill the people, but the soldiers refused. Which means the government was wrong," shrugged the man in the mask, hopping down from Ukrainian APC number 847, which now flies the white-blue-and-red flag of Russia, as well as the black-blue-and-red banner of the recently declared People's Republic of Donetsk.

The APC was part of a column of armour – three light tanks and three APCs – that the pro-Russian fighters seized after some 50 Ukrainian troops apparently refused their orders to crack down on the Moscow-backed separatists that control swathes of the Donetsk region. The vehicles were parked Wednesday night in defensive positions around the local administration building in Slavyansk.

The Ukrainian army's effort to retake Slavyansk and nearby Kramatorsk was supposed to mark the beginning of the end for the pro-Russian uprising in this coal-producing area nestled against the Russian border. Instead, the disastrous effort left the Ukrainian government's hold here looking weaker than ever. Interim President Oleksandr Turchynov must also be unsure of the loyalty of his security services.

The reversal also gave new momentum – and equipment – to the pro-Russian militants, as well as fresh facts on the ground for Russian Foreign Minister Sergei Lavrov to use at four-party talks on the Ukraine crisis that are scheduled for Thursday in Geneva. Since the February revolt that ousted the Kremlin-friendly government of Viktor Yanukovych, Moscow has been arguing that Ukraine must be reinvented as a loose federation along the lines of Bosnia-Herzegovina, to ensure the rights of Russian-speakers in the east and south of the country are protected.

It now looks impossible for Kiev to regain control of this region unless it makes such concessions, or commits to a greater military operation that seems certain to involve significant bloodshed – fighting that could well draw in the Russian army massed just an hour's drive away on the other side of the shared border. Russian President Vladimir Putin has warned that he could send troops into Ukraine if he deems the Russian-speaking population there to be under threat.

At the request of anxious members in Eastern Europe – particularly Poland and the Baltic states of Estonia, Latvia and Lithuania – the NATO alliance said Wednesday that it would bolster its forces near the Russian border.

"Today, we agreed on a package of further military measures to reinforce our collective defence and demonstrate the strength of allied solidarity," NATO secretary general Anders Fogh Rasmussen said after a meeting in Brussels. "We will have more planes in the air, more ships on the water, and more readiness on the land."

There were other setbacks for the Ukrainian government on Wednesday. A second column of APCs was surrounded by pro-Russian protesters near Kramatorsk, and only allowed to withdraw to its base after the Ukrainian soldiers were disarmed. Another group of protesters stormed and seized the city council building in the regional capital of Donetsk, where the regional government offices are already occupied by pro-Russian militants.

Russia's state-run Itar-Tass news service reported that protesters hung the Donetsk People's Republic flag in two more towns, Novoazovsk and Krasnoarmeisk, bringing to 12 the number of cities where pro-Russian forces are in control of at least some buildings.

Part of the reason the Ukrainian troops backed down in their mission may well have been concern about fighting their fellow Ukrainians. But they were likely also swayed by the presence of the imposing "green men" – masked fighters who look and act much like the Russian troops who appeared in the Crimean Peninsula ahead of last month's hotly disputed referendum there.

The man in the mask atop APC 847 said his name was Dmitry and that he hailed from Makeyevka, a suburb of the city of Donetsk. His mismatching uniform – and his willingness to chat with a foreign journalist and pose for photos with locals – suggested he might have be telling the truth.

But many of the other militants wore the same telltale matching weapons, camouflage and well-shined boots as the troops deployed in Crimea, displaying a professionalism and training that no hastily assembled "people's militia" could hope to have.

"I'm not telling you where I'm from," said another masked fighter in Slavyansk, who gave his name only as "Volk," or "Wolf." Under his green camouflage, open at the neck, a striped blue and white "telnyashka" T-shirt – worn by the Russian navy, as well as paratrooper and special-forces units – was visible.

In a hotly disputed March 16 referendum in Crimea – carried out in the presence of the men in green – almost 97 per cent voted in favour of union with Russia. Two days later, the peninsula was formally annexed by Moscow.

Most in the Donetsk region – which has thick economic and cultural ties to Russia – say they don't seek union with their giant neighbour, but rather a referendum on the issue of greater autonomy from Kiev. Many say they are afraid that if the new government moves closer to the European Union and NATO, Russia will close its market to Ukrainian goods, devastating the Donbass region.

"Ninety per cent of our contracts go to Russia. We are connected to Russia. If we lose these contracts, we lose our jobs," said Oksana, a 36-year-old technical interpreter.

Others said the main issue was being allowed to speak their native Russian, rather than Ukrainian, which is the country's sole official language.

"Russian is an international language, but they want to control it and persecute people for speaking Russian," said Oksana Chumak, a 38-year-old ceramics factory worker, repeating an allegation frequently made on Russian television channels. "Our language is like our religion. It's not like we can wake up one more morning and suddenly switch."

Such sentiment is strong in Slavyansk, a depressed factory town that has emerged as the centre of anti-Kiev sentiment. Thursday will see a greater test in the regional capital of Donetsk, when supporters of the government in Kiev are hoping to show their strength at a mass rally on the city's main Lenin Square. Many fear the rally could deteriorate into violence.

The threat of violence hangs over Slavyansk too, where militiamen considered what they should do with their newly acquired hardware.

"We have some people who can drive these," Dmitry, the masked man from Makeyevka said. "We'll find a way to use them." 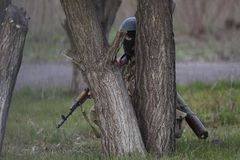