A confidential 12-page statement by a former close aide of Rwandan President Paul Kagame has sparked the reopening of a formal investigation into one of the greatest mysteries of the 20th century: the assassination that triggered the Rwandan genocide.

The document, obtained by The Globe and Mail, accuses Mr. Kagame of direct involvement in the 1994 missile attack that killed former president Juvénal Habyarimana, leading to the genocide in which an estimated 800,000 people died.

The sworn statement has been submitted to French investigating magistrates, who have decided to reopen their probe. The decision has provoked fury from Mr. Kagame, who told military and judicial officials on Monday that he is ready for a "showdown" with France, including a freeze in diplomatic relations, if the investigation continues.

Read more: Assassination in Africa: Inside the plots to kill Rwanda's dissidents

More than two decades after the assassination, nobody has settled the question of who fired two surface-to-air missiles into the Dassault Falcon 50 private jet that carried Mr. Habyarimana and Burundi president Cyprien Ntaryamira, along with seven other officials and a three-man French crew, as their jet approached Kigali's airport on the night of April 6, 1994, after peace negotiations in Tanzania.

Canadian general Romeo Dallaire was the commander of a small United Nations peacekeeping force in Rwanda at the time of the genocide. The United Nations force, which also included about a dozen Canadian troops, was credited with saving thousands of lives during the genocide by securing a few places of shelter. Gen. Dallaire asked the UN to send reinforcements after the mass killings began, but his request was turned down, and the peacekeepers were unable to prevent the genocide.

The latest French investigation – precipitated by a case filed by the families of the French flight crew – has been reopened because of a deposition from Mr. Kagame's former army chief, General Faustin Kayumba Nyamwasa.

As the head of military intelligence for Mr. Kagame's rebel army in 1994, Mr. Nyamwasa says he spoke to Mr. Kagame just two hours after the assassination. In his long-awaited statement to the French investigators, he gives a detailed account of hearing Mr. Kagame and two other aides describing how they orchestrated the shooting down of the presidential plane.

Mr. Nyamwasa says he was summoned to the rebel headquarters at 10 p.m. on April 6, 1994, and when he arrived he saw Mr. Kagame and the two aides listening to radio reports on the assassination.

"We kept listening to the announcements and comments for about five minutes, until Paul Kagame reduced the volume of the transistor portable radio and told us that President Habyarimana's aircraft had been shot down by our own troops," the deposition says.

"He explained that he had kept it secret within a small group under his direct command to avoid any leakage."

Mr. Kagame and the two aides described how the missiles were smuggled to Kigali under a load of firewood on a truck, Mr. Nyamwasa said. The attack was first planned when the presidential jet flew to Tanzania, but it was postponed because of heavy fog, he said. It was then authorized for the return flight, in secret walkie-talkie messages by the rebel commanders, including Mr. Kagame, he said.

After the assassination, the rebel Tutsi army under Mr. Kagame immediately launched an offensive against the government forces, eventually capturing the country and halting the genocide.

Mr. Nyamwasa, the Rwandan army chief from 1998 to 2002, is now a dissident living in South Africa and a strong critic of Mr. Kagame. He has twice been targeted in assassination attempts in recent years, and The Globe has reported evidence that the Rwandan government plotted to kill him.

An earlier French inquiry in 2006 named Mr. Nyamwasa as one of nine Kagame aides who were involved in organizing the missile attack on the presidential jet in 1994. He denies any involvement. The latest French inquiry would require Mr. Nyamwasa to travel to France to testify to the inquiry, but so far the South African government has refused to allow it. He may instead give his testimony through a video link.

The French inquiry has the power to indict suspects and issue arrest warrants. In its earlier phase in 2006, it issued arrest warrants for the nine suspects who were named in its report, although Mr. Kagame could not be indicted because of his immunity as a head of state.

Mr. Nyamwasa, living in a secret location in South Africa under tight security, did not respond to several messages from The Globe seeking comment on his deposition.

Meanwhile, The Globe has also obtained a confidential document from a separate investigation in 2003 that concluded that the presidential assassination was planned by Mr. Kagame, Mr. Nyamwasa and other senior rebel leaders.

The report, marked "top secret" and never published by the tribunal, was written by a special investigations team at the International Criminal Tribunal for Rwanda, a court established by the United Nations to judge the perpetrators of the genocide and other serious crimes.

The investigators said they had gathered evidence that Mr. Kagame supervised three meetings among six senior rebel commanders "to prepare the attack against the plane of President Habyarimana."

They said the conspirators included Mr. Kagame, Mr. Nyamwasa, and several other rebel commanders who were named in Mr. Nyamwasa's statement.

Judi Rever is a freelance writer 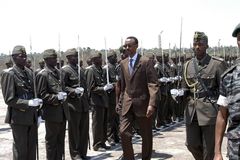 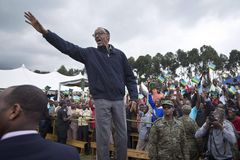