Nadezhda Tolokonnikova isn't a woman who is easily rattled. The 24-year-old has smacked heads with Russia's two most powerful institutions – the Kremlin and the Russian Orthodox Church – and come away still smiling her crooked grin.

She left jail in December after a 16-month sentence emphatically unbowed by the experience, chanting "Russia without Putin!" for the assembled television cameras as she stepped through the prison gates, arms raised triumphantly.

But after an interview with The Globe and Mail this week, a worried look crosses Ms. Tolokonnikova's face. She's realized that she dropped the F-bomb, in English, during our recorded conversation. The subject following the verb was Russian President Vladimir Putin, and she's worried I will use the quote in the newspaper.

"Please tell me you won't use that word," she pleads in Russian. "I know it's a very unpleasant thing to say in English."

It's a surprising request from a woman who is the face of a punk group called Pussy Riot, and who was sent to jail – along with bandmate Maria Alyokhina – for performing an expletive-laced "punk prayer" on the altar of Moscow's Christ the Saviour Cathedral, during which the women prayed for the Virgin Mary to help rid Russia of Mr. Putin.

But the cleaned-up language matches Ms. Tolokonnikova's new appearance – and a new seriousness about trying to change Russia, as a political dissident in the Solzhenitsyn line rather than a shock artist.

Gone, for now, are the balaclavas and sleeveless dresses from Ms. Tolokonnikova's Pussy Riot performances. Instead, she meets journalists at a Moscow art gallery wearing a demure white blouse and long black skirt, her dark hair pinned up in a neat bun.

The 26-year-old Ms. Alyokhina, meanwhile, dresses like the university student she still is (she's a year from completing a journalism and creative writing course), wearing a blue button-down shirt over blue jeans, her curly red hair tumbling past her shoulders.

Asked what's next for Pussy Riot, the two women say nothing about making music. Instead, they launch into passionate speeches about their plans to raise awareness about the prison system that swallowed them, and the need to mobilize Russians against Mr. Putin's rule. Plans that involve civil society, rather than revolution.

She sounds very much like someone campaigning for elected office. She's certainly used to the games that professional politicians play.

She and Ms. Tolokonnikova call their early release – they were to serve two years for "hooliganism motivated by religious hatred" – a public gimmick ahead of next month's Winter Olympics in Sochi, one meant to soften Mr. Putin's international image.

And on Feb. 7, when much of the world will be watching the opening ceremonies at Sochi, the women are planning to be in faraway Mordovia, the central Russian republic where Ms. Tolokonnikova spent much of her time behind bars. They're planning to file legal challenges on behalf of those political prisoners still jailed in what Ms. Tolokonnikova calls Mordovia's "little gulag archipelago."

The tactic is simple: to use Pussy Riot's fame to distract from Mr. Putin's party in Sochi – which they believe will be followed by a fresh crackdown on dissent soon after the Games are over and the world's media moves on.

Ms. Alyokhina invites me to skip the Olympics and come along. "This is more important for society," she says.

Even many liberal Russians found it difficult to support Pussy Riot's profanity-filled concert in Moscow's main cathedral. But thanks in large part to Ms. Tolokonnikova's diarizing of her time in jail – descriptions of 16-hour workdays and harsh punishments– she and Ms. Alyokhina have emerged as two of the most powerful voices speaking out against the Kremlin.

Together, they are filling a vacuum in Russia's political opposition. Mr. Putin, who was rattled by protests against his rule in 2011 and 2012, has since recovered his footing and seems as in control as any time during his 15-year reign as either Russia's president or prime minister. Anti-corruption lawyer and protest leader Alexey Navalny has gone silent since losing a bid last fall to be elected mayor of Moscow.

Tycoon Mikhail Khodorkovsky, who was released as part of the same December amnesty for political prisoners as the Pussy Riot members, headed to Germany immediately after being freed following a decade in jail. He's said he's not interested in playing an active role in Russian politics for the time being.

Ms. Tolokonnikova and Ms. Alyokhina, in contrast, have been anything but quiet since their release. They've moved tirelessly around Russia talking to small crowds about the need for judicial reform. Next week, the pair will fly to New York to take part in an Amnesty International concert.

Both women are mothers of young children. But they say that jail time made them stronger.

"When you live shoulder to shoulder to with the system's officials, it helps you understand better the psychology of those officials. That is why it was a big mistake by the Putin government to put us into jail. Because now we know by practice how to interact with them," Ms. Tolokonnikova says.

The two women do seem somewhat bewildered by the celebrity they gained while they were behind bars. Despite identical prison sentences, the bulk of public attention has fallen on the more photogenic Ms. Tolokonnikova – portraits of her hung from every wall of the art gallery they visited this week – to the extent that Russian media have drawn bizarre comparisons to the pop group Destiny's Child, with Ms. Tolokonnikova cast as Pussy Riot's Beyoncé Knowles.

Ms. Alyokhina seems unbothered by her second-fiddle status, often letting Ms. Tolokonnkova answer media questions first before adding her own remarks. Even before they were arrested, Ms. Tolokonnikova was Pussy Riot's de facto leader, writing some of the band's most aggressive lyrics and coming up with the choreography for the performance in the Christ the Saviour Cathedral. (A third Pussy Riot member was also jailed for the act, but received a shorter prison term because she was tackled by security before the performance began.)

Supporters say they deserve the attention because their defiant stand against the Kremlin captures the choice facing today's Russia.

"They are a mirror of Putin," says Marat Gelman, the owner of the art gallery that this week was screening a documentary about Pussy Riot that had been banned from screening in Russia. "[Mr. Putin] is a man, they are girls. He is old, they are young. He is grey, they are colourful. He is rich, they are poor ... They've shown to the entire world how our system works, the courts, the prosecutors, the prisons. They've also shown that Russia's art community is very powerful."

Ms. Tolokonnikova's father, Andrei, takes it a step further, comparing his daughter and Ms. Alyokhina to famous Soviet-era dissidents like, yes, Alexander Solzhenitsyn and Andrei Sakharov. "They can fill that role," he says, with a bent grin that matches his daughter's.

Despite the risk that she could go back to jail, the philosopher and writer says he will encourage his daughter to escalate her fight against the Kremlin.

He says Ms. Tolokonnikova had an apolitical upbringing in the Arctic mining city of Norilsk, before discovering politics a decade ago when Mr. Khodorkovsky was jailed on charges many believe were punishment for his political opposition to Mr. Putin.

She grew even more political, and radical, after she met her now-husband Pyotr Verzilov, a dual Canadian and Russian citizen who spent part of his high school years living in Toronto's High Park neighbourhood. (Mr. Verzilov's Canadian passport – and Ms. Tolokonnikova's Ontario health card – were entered as evidence during her trial as proof that Pussy Riot were "foreign agents" sent to stir unrest in Russia. Ms. Tolokonnikova said she spent only a month living in Canada.)

At least it was in the beginning. Now, both Ms. Tolokonnikova and Ms. Alyokhina seem motivated by little else than escalating their fight with Mr. Putin and his regime.

"We need to make everyone overcome the barrier that holds them back from getting involved in political actions," Ms. Tolokonnikova says. "Everyone has to ask himself or herself: 'Why do they want Russia to be without Putin?'"

Her own answer to that question involves that English expletive, a flash of the angry punk rocker that, for the moment, she's trying to keep hidden.

She recovers her new grace as an admirer steps forward to hand her a bunch of flowers. Ms. Tolokonnikova, the politician-in-training, gracefully receives the bouquet and smiles for the flashing cameras.

Every eye in the room is on her. And her combination of charisma and cool determination seems far more potent than any number of women in balaclavas.

Analysis
Putin’s pardoning spree is the calculated move of a man on a mission
December 19, 2013 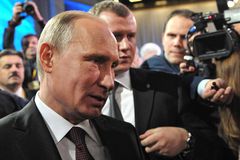 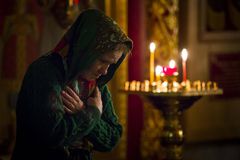