Russian President Vladimir Putin called Thursday for "one powerful fist" to fight terrorism, hinted at more sanctions against Turkey and accused Western powers of creating "a zone of chaos."

Speaking in his live state-of-the-nation address, Putin called for an end to what he called double standards that hampered uniting global efforts in fighting terrorism. Without naming the United States, he accused Washington and its allies of turning Iraq, Syria and Libya into a "zone of chaos and anarchy threatening the entire world" by supporting change of regimes in those countries.

Putin didn't address efforts to start a peace process in Syria in his speech, focusing on the need to pool global efforts in the fight against terrorism following the attacks in Paris and the downing of a Russian passenger plane in Egypt. The IS has claimed responsibility for both.

"We must leave all arguments and disagreements behind and make one powerful fist, a single anti-terror front, which would work on the basis of international law under the aegis of the United Nations," he said, addressing lawmakers and top officials in an ornate Kremlin hall. "That means no shelter to bandits, no double standards, no contacts whatsoever with any terrorist organizations, no attempts to use them for some selfish goals, no criminal, bloody business with terrorists."

"For that money the bandits are recruiting mercenaries, buying weapons and staging cruel terror attacks aimed against our citizens, as well as citizens of France, Lebanon, Mali and other countries," he said.

White House press secretary Josh Earnest said it was "a little ironic" for the Russian leader to point a finger at others.

"The ongoing and intense military effort by the Russians to prop up a dictator inside of Syria that is the root cause of so much chaos makes it a little ironic for him to be pointing the finger at anyone else," Earnest said Thursday, adding that Washington "would welcome a constructive Russian contribution" to the U.S.-led coalition.

"But Russia has different aims, apparently, if you look only at their military strategy," Earnest said. "We would like to see Russia be more constructive in trying to confront this problem."

Putin in his speech accused Turkey of a "treacherous war crime" in downing a Russian warplane at the border with Syria.

"Allah must have punished Turkey's ruling clique by depriving it of sense and reason," Putin said.

Turkey said the plane violated its airspace for 17 seconds despite repeated warnings; Russia denies that. The shoot-down, the first time a NATO country has downed a Russian plane in more than half a century, triggered a bitter falling out between the two nations, which had developed robust economic ties.

Moscow deployed long-range air defence missile systems to its base in Syria 50 kilometres (30 miles) south of the border with Turkey and slammed an array of economic sanctions on Turkey, including a ban on imports of fruit and vegetables and the sales of tour packages.

"We will remind them not just once about what they have done, and they will feel sorry about it more than just once," Putin said without spelling out what other actions Russia may take.

Russian Energy Minister Alexander Novak said Thursday that talks with Turkey on building a pipeline that would allow Russia to export natural gas to the European Union through Turkey have been halted.

The Turkish and Russian foreign ministers, meanwhile, met on the sidelines of a meeting of the Organization for Security and Cooperation in Europe in Serbia's capital, Belgrade on Thursday, the first at a senior level between the two countries since the plane's downing.

Turkish Foreign Minister Mevlut Cavusoglu said he offered his Russian counterpart, Sergey Lavrov, Turkey's condolences over the death of a Russian pilot. Cavusoglu said "it would be unrealistic to say that the problem has been overcome," but added "our hope is that they avoid making unfounded claims."

Lavrov said he "heard nothing new" from Cavusoglu.

Turkish President Recep Tayyip Erdogan has vehemently denied that his country was involved in oil trade with the IS, and has pledged to step down if Moscow proves its accusations. The Russian Defence Ministry on Wednesday released an array of satellite and aerial images which it said show hundreds of oil trucks streaming across the border. The ministry insisted the images definitively prove Turkey's massive oil trade with the IS.

Top Defence Ministry officials also accused Erdogan and his family of personally benefiting from the oil trade with the IS, although they didn't provide any evidence to back the claim.

Erdogan on Thursday claimed the largest dealer for IS oil is a Syrian who also has a Russian passport.

"Let's decrease tensions with our rhetoric," Davutoglu said. "The accusations should end. To sit around a table to talk — that's the method we would prefer."

"Those who were not happy about sanctions imposed against them should not impose sanctions on others," he said. "Sanctions are detrimental to both sides."

Moscow says its warplanes have been targeting terrorist groups near Syria's border with Turkey, while Ankara says the Russian airstrikes have been aimed at moderate militant groups made of ethnic Turks who oppose Syrian President Bashar Assad's regime. The militants shot and killed the downed plane's pilot while he was descending on parachute and also killed a Russian marine who was involved in rescuing the plane's co-pilot.

Following Monday's meeting with President Barack Obama on the sidelines of a climate summit in Paris, Putin said they have a shared understanding on how to move toward a political settlement in Syria and discussed efforts to compile one list of extremist groups and another of legitimate political opposition.

Putin said in his speech that Russia's air campaign in Syria, which started on Sept. 30, is intended to fend off a terror threat to Russia posed by militant groups in Syria. He said the military action has proven the capability of Russia's modernized military.

"Modern Russian weapons have worked efficiently, and the priceless experience of its use in combat will be analyzed to help further improve our weapons," he said.

Speaking at a separate meeting honouring Russian military officers for their action in Syria, Putin said "positive things have happened there thanks to you and your comrades, who have been working in the air, and, in fact, have been leading the Syrian military units."

While Putin has repeatedly said Russian troops in Syria won't engage in ground combat, the statement signalled the high degree of the Russian military's involvement in co-ordinating Syrian army action.

Putin's spokesman Dmitry Peskov said the president's statement didn't mean that Russian military officers have been put in charge of some Syrian army units but referred to a "co-ordination of Syrian army's offensive operations with air support." 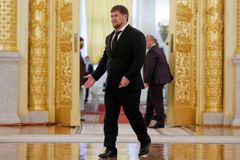