The two-year-old Syrian civil war has once again burst its national borders as a shadowy rebel group abducted 20 United Nations peacekeepers who patrol a ceasefire line on the Golan Heights that has separated Syrian and Israeli forces since 1974.

The unarmed UN personnel, all from the Philippines, were attempting to repair an observation post damaged in recent Syrian fighting, when some 30 members of the so-called Martyrs of Yarmouk Brigade jumped them.

A video circulated by the Syrian Observatory for Human Rights, a London-based opposition group, showed Abu Qaed al-Faleh, acting as a spokesman for the rebel group, dressed in army fatigues and standing in front of two white armoured UN vehicles in which several people were sitting wearing the familiar light-blue UN helmets and body armour.

The group is holding the peacekeepers, Mr. al-Faleh announced, until Syrian President Bashar al-Assad's forces are withdrawn from the nearby Syrian village of Jamlah, scene of intense recent fighting.

Describing the Syrian regime, along with the UN and European countries as "collaborators with Israel," the rebel spokesman said of the hostages that "if no withdrawal is made within 24 hours, we will treat them as prisoners."

It is an ominous warning. Earlier this week, a video showed the group allegedly executing several Syrian soldiers it had taken prisoner, a charge Human Rights Watch said it is investigating.

Vitaly Churkin, Russia's ambassador to the UN, which holds the presidency this month of the UN Security Council, denounced those who carried out Wednesday's abduction.

It is "particularly unacceptable and bizarre" he said because the members of the UN force on the Golan "are unarmed and they have nothing to do with the situation in Syria."

"They are there on a completely different mission, so there is no reason at all under any circumstances, any kind of sick imagination, to try to harm those people," he said.

"They should stop this very dangerous course of action."

Russia is a key supporter of the Assad regime in Syria.

The United Nations Disengagement Force, or UNDOF, stationed on the Golan Heights, was established in 1974 following the 1973 Yom Kippur War to monitor the separation of Israeli and Syrian forces and maintain a ceasefire. Israel captured the Golan Heights from Syria in 1967 and repelled Syrian efforts in 1973 to recapture it.

The Syrian village of Jamlah, near which Wednesday's abduction took place, is at the southernmost end of the ceasefire line.

The abduction is just the latest in a growing number of incidents in which the Syrian conflict has spilled over into neighbouring areas. On Monday, some 40 Syrian soldiers were killed in an ambush inside Iraq after the soldiers had taken temporary refuge from rebel fighters who had overwhelmed a Syrian border crossing.

Syrian rebels also are believed to be holding a Canadian staff member of the UN contingent on the Golan. The staffer was seized two weeks ago, according to diplomats familiar with case.

Indeed, a growing exodus of refugees from Syria also has overwhelmed neighbouring countries. There now are more than one million such people, Antonio Guterres, the UN High Commissioner for Refugees, said Wednesday.

The number has swelled dramatically this year, said Mr. Guterres, with most pouring into Lebanon, Jordan, Turkey and Iraq.

More than 400,000 people have become refugees since Jan. 1, and often arrive in neighbouring countries "traumatized, without possessions and having lost members of their families," he said. Around half are children; the majority under age 11.

"We are doing everything we can to help, but the international humanitarian response capacity is dangerously stretched," he said. "This tragedy has to be stopped."

Syria opposition to skip some international meetings over ‘silence’ on killings
February 23, 2013 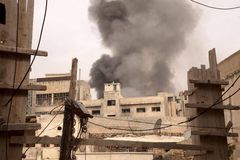 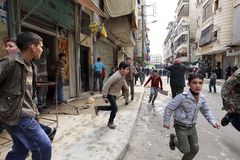 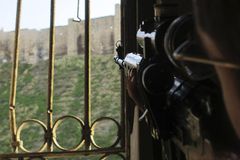