Thousands of kilometres away in wintry Canada, Almasa Habash compulsively checks her phone for news of her family still trapped in a besieged Syrian town.

"I feel helpless," she said in a phone interview with The Globe and Mail from her new home in Halifax. "They are far away and suffering and no one cares. There is nothing I can do but watch."

By December, when Ms. Habash, her husband, Mohamed, and their two children were preparing to leave Lebanon for Canada as resettled refugees, news coming out of their native town of Madaya was bleak; a siege since July, 2015, had diminished all the town's supplies and relatives recounted that they were eating foliage and domestic animals to survive.

Now in Canada, between rushing the children to school and making dinner for the family, Ms. Habash pores over the images on her phone, sent by beleaguered neighbours and friends, their sunken faces unrecognizable, from the home she fled four years ago.

With news that the first-aid convoy carrying long-awaited medicine, food and other supplies for an estimated 40,000 people reached Madaya on Monday, the Habashes were by the phone waiting for updates. Ms. Habash's husband had spoken to his mother via WhatsApp messenger service the night before, but did not know by Monday evening whether she was among those who received aid.

"When he spoke to her she was crying, just crying," Ms. Habash said. "There was nothing to talk about, everyone is dying over there."

The convoys arrived after months of stalled negotiations between warring groups, prompting outcry from aid organizations that reported dozens in the town were dying of starvation. According to Médecins sans frontières (Doctors Without Borders), which supports a health centre in Madaya, 23 patients have died of starvation since Dec.1, including six infants and five seniors. "Our neighbour, too, was among the dead," Ms. Habash said.

Medics in the town regularly reported injuries and deaths caused by sniper bullets and land mines among those who tried to leave Madaya. At one point, residents rioted in an attempt to seize the last stock of food available at an MSF-supported aid distribution point. Brice de la Vigne, MSF director of operations, described the town as "an open-air prison."

Monday's aid distribution was part of a United Nations-sponsored operation to help tens of thousands of civilians cut off for months in four besieged communities in Syria.

Syrian rebels opposed to President Bashar al-Assad are in control of Madaya and neighbouring Zabadani, while government troops and Hezbollah fighters have encircled the towns. A barrier of barbed wire, land mines and the threat of sniper fire have kept residents ensconced inside.

Aid to both towns was co-ordinated with a similar shipment to Fouaa and Kfarya, two pro-regime towns in Idlib province to the north, which are surrounded by the rebel group Ahrar al-Sham. The latter negotiated with the Syrian government toward an agreement known as the four-towns pact, part of which was implemented with aid delivery in October and the evacuation of fighters and their families from Zabadani last month.

But after the October delivery, plans for more aid came to a halt.

The siege in Madaya gained international attention when startling images of emaciated children were circulated on social media, underscoring the urgency for new peace talks the UN is slated to host in Geneva on Jan. 25.

Aid distribution in Madaya is expected to continue through the night to reach thousands.

"It's really heartbreaking to see the situation of the people," Red Cross spokesman Pawel Krzysiek, who oversaw the distribution in Madaya, told the Associated Press. "A while ago, I was just approached by a little girl and her first question was, 'Did you bring food?'"

At the start of the siege, the family was living off preserves, but they soon ran out. The price of food in the town soared. Friends told the Habashes the cost of a spoonful of sugar was $200.

"Once when we asked what they were eating, they sent us a picture of a cat," Ms. Habash said. "There are no animals left in Madaya."

Scarcely a month into their new life in Canada, she said she feels distraught with the news coming from home. "I'm sad; those are my friends and my family. But I'm grateful to be in a better country now."

Why some Syrian refugees decline Canada’s resettlement offer
May 16, 2018 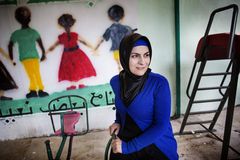 The Globe's Mark MacKinnon returns to a refugee camp where fears about a lost generation are becoming a reality
May 16, 2018 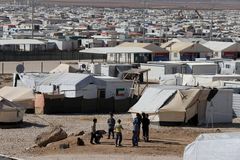