For one remarkable week in September, 2000, Joseph Caron sat across a table from a group of North Korean representatives.

The meetings in Beijing's St. Regis Hotel yielded an agreement to begin formal diplomatic relations, and in the years that followed, Canadian ambassadors routinely travelled into the country.

Now, that past has new relevance for Canada as North Korea once again provoked international condemnation with a missile launch weeks after senior Canadian officials resumed travel to the country to win the freedom of jailed pastor Hyeon Soo Lim. The modest revival of ties has renewed calls for Canada to assert a larger role as a trusted intermediary, a bridge seeking ways to lower tensions around a defiant regime whose nuclear-tipped missiles, were they ever fired at the continental U.S., would almost certainly fly above Canada.

Explainer: North Korean missile program: What's happened so far, and what could happen next

"Maybe, just maybe, Canada could help out," said Marius Grinius, a former Canadian ambassador to South Korea and North Korea. "The current Canadian government has got to decide that they're going to be a player."

But it's a controversial idea, even among former diplomats with experience in the region, some of whom reject completely the notion that Canada has anything to offer in a situation with no clear solutions. However, it has been clear from the earliest days that little is normal about seeking to play a role with North Korea.

The week that Mr. Caron sat down for talks in Beijing, Pierre Trudeau died. It was clear the North Korean side knew nothing about the former prime minister, though the delegation delivered an eloquent speech, in English, expressing sadness – without once naming Mr. Trudeau. The Canadians, meanwhile, knew little about their counterparts. The North Koreans appeared at formal meetings, but didn't stick around for drinks or dinner. They didn't chat over a cigarette. The Canadians weren't sure they could believe the names or titles of the people across the table.

"You never knew who they were," said Mr. Caron, who went on to become an ambassador to Beijing who was also accredited to Pyongyang. North Korea, he said, "is a totally lawless regime, and nobody tells the truth."

It wasn't even particularly clear why the North Koreans were there.

"Our best guess is that their most fundamental motives are regime survival and international legitimacy," a Canadian parliamentary delegation wrote in late 2000, after conducting a research trip to North Korea just prior to the Beijing talks.

Canada was not a major player in North Korea, and had no substantive modern business links; historical ties are limited largely to the work of 19th-century Christian missionaries in places like Pyongyang, in addition to the death of Canadian troops during the Korean War.

But advocates suggested Canada occupied a unique position, historically and diplomatically, to seek ways to resolve the protracted and occasionally deadly frictions between Pyongyang, Seoul and Washington.

Former prime minister Lester B. Pearson's "vision of the contribution of middle powers to peace making and peace keeping in the bi-polar world of the Cold War may still have some relevance in the last place on earth where the Cold War has survived," Erich Weingartner wrote in 2004. A former aid worker stationed in North Korea, Mr. Weingartner advised the Canadian government as it established diplomatic relations.

North Koreans, for their part, "understand and appreciate our special relationship with both the USA and the Republic of Korea, and for that reason regard us as a potential 'honest broker,'" he wrote.

In the years that followed, however, North Korea resumed a rapid schedule of nuclear and missile tests. Canada under Stephen Harper responded with an enthusiastic embrace of sanctions and a freeze in diplomatic relations. Pyongyang has not forgotten that history, Mr. Weingartner said, and any thought of Canada as an intermediary looks difficult indeed.

"The hostility they faced under the Harper government has demolished any dream that such a Canadian role would be possible, or even desirable," he said.

David Chatterson, who left the foreign service in 2015 after serving as ambassador to South Korea, is more blunt.

"There is no interest in a broker role," he said.

"The North Koreans need an enemy. So they poke and prod until they get a response." For the U.S., meanwhile, a hostile North Korean regime provides reason to station anti-missile technology and large numbers of troops on the Korean peninsula. "If there was not tension on the peninsula, it becomes very difficult to justify that kind of military presence right beside China. So a little irritation, a little anxiety – not a bad thing," he said.

"I don't see this as being anywhere similar to the situation in Iran, where there was a solution in the offing for years and thank God, they finally found it," he said. With North Korea, "I don't see any solution here, I really don't."

Plus, Canada simply doesn't have much to offer. "Our diplomatic and track-two academic connections have atrophied. There are mixed signals from Washington about whether even a limited Canadian initiative would be welcome," said Paul Evans, a University of British Columbia Asia scholar who, between 1990 and 2002, visited North Korea twice and participated in dozens of meetings with North Korean institutes and officials.

Still, there are signs that Ottawa is paying some renewed attention to North Korea. The country is mentioned four times in Canada's new defence policy, which calls it "a serious and increasing threat to both regional stability and international peace and security."

Canada's foreign ministry, meanwhile, has sought to deepen relations with South Korea; in May, deputy minister of foreign affairs Ian Shugart agreed to work together with his counterpart in Seoul on denuclearization of North Korea, the Yonhap news agency reported. The two sides met again this week in Ottawa, and "have agreed to maintain close co-operation in persuading North Korea into halting provocations and renouncing its nuclear ambitions," Yonhap said.

Canada continues to have a direct, albeit small, role on the ground, too, as a nation contributing a small number of military personnel to the United Nations Command, a relic of the Korean War dedicated to the defence of South Korea.

At the very least, Canada "should have at least one person full-time on North Korea in global affairs, so that when you need it, you have got that kind of expertise," Mr. Caron said. "Because you never know when you need that."

"'Talk therapy' has been very successful in dealing with drug addiction. I submit the same is the case in prevention of war," he said. More countries need to get down to the business of dialogue, he said, "and Canada would be ideally placed in this respect."

To do that would mean once again having an ambassador to North Korea, while looking for other ways to exchange people and ideas, be it through sports, arts or the granting of visas to North Koreans to study in Canada.

Canada's status as a "non-threatening" nation has some value, said Andrei Lankov, an expert on North Korea at Kookmin University in Seoul.

"It's not incidental that Canada is now one of the few countries where the North Korean government agrees to send its students," he said. 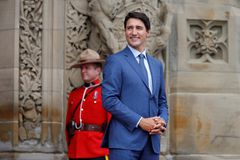 U.S. bombers drill over Korean peninsula days after latest missile launch
August 31, 2017
Trump says 'talking not the answer’ on North Korea, but Mattis disagrees
August 30, 2017
Follow Nathan VanderKlippe on Twitter @nvanderklippe
Report an error Editorial code of conduct
Due to technical reasons, we have temporarily removed commenting from our articles. We hope to have this fixed soon. Thank you for your patience. If you are looking to give feedback on our new site, please send it along to feedback@globeandmail.com. If you want to write a letter to the editor, please forward to letters@globeandmail.com.
Comments