The Canadian border got dragged into the 2016 U.S. presidential campaign on Sunday, with a prominent candidate appearing to entertain the notion of building a giant wall on the 49th parallel.

The idea was raised in a talk-show interview with Republican contender Scott Walker, who after being pressed twice by the interviewer appeared to agree it was worth considering.

"Some people have asked us about that in New Hampshire. They raised some very legitimate concerns, including some law-enforcement folks that brought that up to me at one of our town-hall meetings about a week and a half ago," the Wisconsin governor said during an interview with NBC's "Meet The Press."

"So that is a legitimate issue for us to look at."

Walker didn't dwell on the issue. He quickly steered the conversation to the Middle East, rebuilding the military, and national security. The exchange about Canada never even made it to air, and was edited out of the interview highlights that ran on "Meet The Press" and was simply posted on NBC's website.

The context for the conversation is the heated U.S. debate about the Mexican border. Occasionally, the debate will fleetingly touch upon the northern frontier.

On those rare occasions that the Canadian border does come up it's likelier to be raised, as was the case Sunday, by political commentators than by the presidential candidates themselves.

That's because the Canadian border makes a handy polemical tool — a pointy needle for pundits seeking to puncture the conservative logic on the other border.

A textbook example was a piece in Politico magazine last fall headlined, "Fear Canada: The real terrorist threat next door." Its first 18 paragraphs were about Mexico. Before it even mentioned the word "Canada," it sought to demolish a Republican talking-point about ISIL terrorists supposedly sneaking across the Rio Grande.

That's what Sunday's exchange was about.

In a week when Walker himself raised the terrorists-from-the-south theme, and amid a Republican primary in which the poll-leader, Donald Trump, wants to deport 11 million illegal migrants and build what he calls the Great Wall of Trump, an interviewer asked: Why Mexico and not Canada?

It was the interviewer who twice raised the Canadian border. NBC host Chuck Todd challenged Walker to explain the focus on the south and, in doing so, he referenced terrorists coming from Canada.

Todd asked the governor: "The most famous incident that we had of terrorists coming over our border was on our northern border. Why aren't you talking about securing the northern border?"

Walker replied that he favoured securing borders in general but said the more rampant current problem was on the southern border.

Todd pressed him again, prompting Walker to mention the northern frontier, in passing.

It was reminiscent of an exchange a few days earlier. Once again, it was a media personality who raised Canada as a point of comparison while chiding a conservative about the other border.

The why-not-Canada question was posed in that case by the most famous Spanish-language journalist in the U.S., prominent Trump nemesis Jorge Ramos.

The anchor on the Univision network, who was momentarily expelled from a news conference after he confronted Trump, raised it in an interview with a Fox News host.

That kind of chatter — as idle as it might be — can make Canadians jittery given that more than one-third of Canada's Gross Domestic Product involves trade with the U.S., and that the tightened border after the 9-11 attacks caused a ripple-effect that still hasn't completely subsided.

Canada's defence minister weighed in when asked about Walker's remarks Sunday, although he said he hadn't yet heard them. In response, Jason Kenney said Canada would protect what he called the largest bilateral trading relationship in economic history and outlined security steps already taken.

"Of course we would vigorously oppose any thickening of the border," he told an Ottawa news conference. 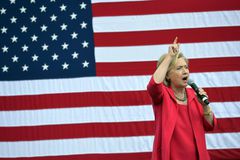 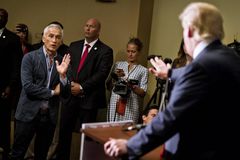