The Republican Party could be nearing a breaking point with Donald Trump.

As he skips from one gaffe to the next, GOP leaders in Washington and in the most competitive states have begun openly contemplating turning their backs on their party's presidential nominee to prevent what they fear will be wide-scale Republican losses on Election Day.

Back in 1996, the party also largely gave up on nominee Bob Dole once it became clear he had little chance of winning, so it's not without precedent. Nevertheless, it's jolting prospect now, with roughly three months still left before the Nov. 8 vote and weeks before the three presidential debates.

COMMENTARY: YAKABUSKI: A presidential campaign that is certifiably alarming

Republicans who have devoted their professional lives to electing GOP candidates say they believe the White House already may be lost. They're exasperated by Trump's divisive politics and his insistence on running a general election campaign that mirrors his approach to the primaries.

"Based on his campaign record, there's no chance he's going to win," said Sara Fagen, the political director for former President George W. Bush. "He's losing groups of people he can't get back."

Trump's campaign says things are moving in the right direction, a position that itself feeds the discontent among his GOP detractors. The billionaire businessman's loyalists say enough time remains to change the dynamic against Democrat Hillary Clinton who, like Trump, is deeply unpopular with voters.

And his backers are blaming the media for the perception that all is not well.

"Frankly, a lot of stuff over the last week ... it's him being distorted," said Trump's campaign chairman, Paul Manafort. "For the last week or so, he's been very focused and very much on his game."

Trump did show some modest improvement as a candidate in the past week. He has stopped criticizing a Muslim family of a fallen U.S. soldier. Gone are the fights with some of his party's most respected members of Congress.

But also in the past seven days, Trump has questioned the advice of senior aides, threatened to stop raising money for the party, dismissed the usefulness of get-out-the-vote efforts and defended his decision not to run any television ads even as his opponents fill the airwaves with spots backing Clinton in several contested states.

It all largely overshadowed the content of 44 previously-unreleased email exchanges Clinton had while at the State Department. They became public on Tuesday and showed her interacting with lobbyists, political and Clinton Foundation donors and business interests while serving as secretary of state.

To some Republicans, it's enough for the party to give up on their nominee.

More than 100 GOP officials, including at least six former members of Congress and more than 20 former staffers at the Republican National Committee, have signed a letter asking the party chairman, Reince Priebus, to stop helping Trump's campaign.

"They're going to do it sooner or later. They might as well do it sooner to have more impact," said former Minnesota Rep. Vin Weber, among those who signed.

Senior Republicans in Washington and in some of the most contested states have discussed a scenario in which the party scales back its presidential focus in states that don't feature top races for Senate. They could abandon a state such as Virginia, for example, and focus more on a state such as Indiana, where Democrat Evan Bayh is trying to make a Senate comeback.

That's according to several Republican officials in Washington and states that would be affected, including Ohio, Pennsylvania and New Hampshire. They spoke to The Associated Press on the condition of anonymity because they were not authorized to describe publicly those private discussions.

There is no evidence that a formal plan to break with Trump exists at either the state party or RNC level, but Priebus has informally discussed the possibility with party leaders in battleground states in recent days, three of the officials said.

Should that occur, it's not likely to happen until after Labor Day, as the party is still relying on Trump to help raise money to fund its expansive political operation. But the amount of money needed decreases as each day passes, giving the RNC greater financial freedom to potentially change course as the election nears.

The dissension in the Republican ranks hasn't affected Trump's ability to draw supporters to his rallies. Lisa Thompson, a firefighter from St. Cloud, Florida, is among the many who continue to stand in long lines for hours to see Trump at his events.

She said those balking at his missteps were being "too sensitive" — a luxury the nation can't afford with growing security threats. She urged Trump to stick with his playbook.

Trump goes on tear against media, amid signs of collapsing campaign
August 14, 2016 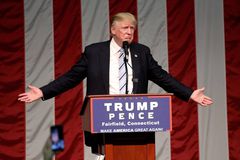 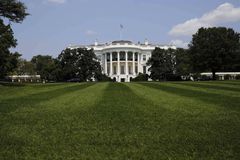 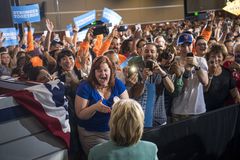