The voice on the radio is calm, its message anything but.

"Civil war is going to happen," says the announcer on a station broadcast across the arid plateau around Khon Kaen, where rice paddies, cane fields and fishing-net factories form the geographic heart of the country's red-shirt movement. It is now preparing to fight back if the government it supports, under caretaker Prime Minister Yingluck Shinawatra, falls. "All sides, get ready," the voice says. "We are ready to come together any time in the name of democracy."

While months of anti-government yellow-shirt protests have gripped Thailand and now stand poised to cripple its capital, the red-shirt movement that is the power base of the Yingluck government has repeatedly ceded the spotlight to its rivals – even as the government it backs struggles to survive until an election planned for Feb. 2.

But the red-shirt quiet masks a volatile anger that threatens to plunge Thailand into a major new crisis, one that risks leaving new bodies in the streets as the two sides battle to shape the form of future governments. Some government supporters, fearing that opposition protests could turn against them, have begun planning ways to leave in hopes of protecting their families.

"We're afraid this might turn into Egypt, turn into a civil war," said Sasiprapa Raisanguan, a student activist in Khon Kaen.

The colours, sometimes but not always reflected in the clothes supporters wear, have been adopted by the two main political factions in Thailand. The yellow-shirts, largely wealthier urbanites, distrust the Yingluck government, which they believe is a puppet for the Prime Minister's brother, the exiled billionaire former president Thaksin Shinawatra.

They have criticized the democratic process, accusing the country's rural population of being too uneducated, and too prone to have its votes bought, to elect a proper government. The more rural red-shirts here, meanwhile, largely support the government, which they have repeatedly elected. But their stand, they say, is for the salvation of democracy itself, and their ability to be governed by the rulers they choose. They accuse the rival yellow-shirts of attempting to illegitimately seize power because they are unable to win enough votes at the ballot box.

Given the weeks of surging protests in the capital, Bangkok, and the machinations of the country's unelected bodies, it's unclear whether the February election will even take place. If it doesn't, large numbers of seething red-shirts appear ready to erupt. In Thailand's north-east, the prospect of violent conflict between Thais has begun to seem unavoidable, the product of both fear of the worst and a deep frustration at the continuous dysfunction in the country's political system. After all, Mr. Thaksin and his political successors have never lost an election since 2001. And yet time and again they have been forced from office, the last time in a military coup in 2006.

If it happens again, this red-shirt stronghold declares itself ready to rise up and fight back this time from places like Pak Nam village, an hour's drive north-east of Khon Kaen. Here, a radio mast ascends high above a small office where Tanat Sirisankulyuad is the director of a station that is readying itself to help organize a response.

"There's going to be blood if there's no elections," he said. "You will see an expression of emotion like never before in Thailand. Because we feel that we have been suppressed for a long time."

A veteran with 20 years of military service, Mr. Tanat keeps a bulletproof vest on the floor outside the radio studio. "We're ready to fight in all forms," he added. "It can be with weapons. We won't fight bare-handed any more."

Prospects for the election, meanwhile, are highly uncertain, adding to the pall of defiance and fear. Yellow-shirt protests have kept candidates from registering – enough so that the country's Election Commission has little faith in their outcome even if the vote is held on schedule.

"Yes, we will be able to have elections," said Thitipol Todsarod, provincial director of the Election Commission of Khon Kaen. "But I don't think they will elect enough people to open parliament." In what should be campaign season, political posters are difficult to find. Many people simply don't believe the vote will happen.

Still, in the uncertain circumstances that have come to define Thai political life, it's possible Mr. Tanat's worries will prove unfounded.

The yellow-shirt faction – already partway through the work of unseating the current government – has announced a plan to "shut down" Bangkok on Jan. 13, potentially taking the latest round of instability to a crescendo that would deeply shake the coup-prone country. On Friday, Suthep Thaugsuban, the man leading the yellow-shirt opposition, listed 20 Bangkok intersections for protesters to take over in their bid to paralyze the city. "We'll occupy the intersections all day and night and we'll have fun on the streets," he said.

A pre-emptive military coup, always a possibility in a country that has seen nearly a dozen in eight decades, could take the wind from the sails of protesters on both sides.

For the yellow-shirts, that option may actually be preferable, offering a quick way to get rid of the current government. Some industry leaders in Khon Kaen, critical of the government's populist policies, agree with them.

"If there was to be a civil war, I believe a coup d'état is better," said Witoon Kamolnameth, the former president of the Federation of Industry of Khon Kaen, and a leading yellow-shirt in the region. Among the federation's members are sugar and rice mills, garment factories and fishing-net makers. They have chafed under policies brought in by the current administration, including a higher minimum wage and a guaranteed minimum price for rice.

"The present government has caused problems for industry," added Samart Angwarawong, the federation's newly-installed president. "I can say that most people do not want this government," Mr. Witoon said. "We're saying the government should step down now. And then reform the country to the point that all groups can agree. And then have elections."

But those policies have won over many red-shirts, who tend to come from poorer and more agricultural areas. In Khon Kaen, the yellow-shirts tend to drive Mercedes. The red-shirts drive scooters and water buffalo, and talk about the gains they've made under the current government.

Several years ago, for example, Khampa Laosuwan was a million baht in debt, the equivalent today of $32,000, which is roughly the value of a house in her tiny home village of Banton. The higher rice prices have distorted markets, created oversupplies and led to questions about the government's ability to continue funding such a generous program. But it's worked for Ms. Khampa. She has pared her debt down to 300,000 baht. "With the good price for rice these days, I've been able to pay off a lot of it."

She said she knows opponents accuse the current government of corruption. She supports the government anyway. "If we are given the choice, we will take the corrupt people who provide us something," she says.

Yet across north-eastern Thailand, there is also a fear that that government will soon be no more – and that the consequences will prove deadly.

Some yellow-shirt activists said a list has circulated bearing the names of some 3,000 people who believe they are slated for execution in case of a coup. Pongpit Onlamai has been told he is on it because he runs a red-shirt website, the movement's best-read and therefore most powerful. "I think I am seen as an IT weapon," he said. He also runs a popular daily radio show in Khon Kaen, where he regularly gets calls from people looking to sabotage his show by speaking ill of the Thai monarchy, a serious sin in a country with the world's strictest lèse majesté laws.

"I am not scared, because I haven't done anything wrong," Mr. Pongpit said. "But I have told my father if I disappear for a couple of days, it means I am gone. Dead." 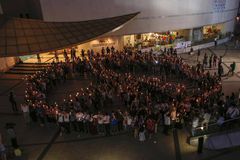 Opinion
Why Thailand is crucial to democracy in Asia
January 2, 2014 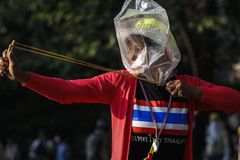