Not too long ago, on a warm October evening, Nasir Prodan clambered down the five marble steps of an Athens basement to pray. He swayed through a swarm of about 50 Bangladeshis and knelt on the tenement's grimy green carpet trying to listen to the service as bystanders outside poured scorn and hostility on Islam.

That was just the start.

Fifteen minutes into the 8 p.m. prayer, roaring rioters took a crowbar to the makeshift mosque, shattering its window, then, tossing a flaming beer bottle inside. Mr. Prodan and his compatriots escaped unscathed. But as they put out the fire and returned to resume worship, rioters retaliated by padlocking them all inside.

"We were like trapped mice," Mr. Prodan recalls. "It took police three hours to come and unlock us. It took me hours to calm down."

The harrowing hate crime received little national attention. Three police officers were stationed 50 metres away, keeping watch over the now-battered and boarded-up building as Mr. Prodan and other Muslims walk past racist graffiti and the circle-and-cross insignia of a far-right organization known as Golden Dawn to attend daily prayer sessions.

Unlike any other European city, Athens has yet to build even a single mosque for its swelling population of Muslims, now estimated at about 750,000, about 10 per cent more than those in the city of London.

Successive Greek governments have long promised to build an Athens mosque ever since Christianity was restored here in the early 19th century and four centuries of brutal Ottoman rule was toppled.

Hopes resurfaced ahead of the 2004 Athens Olympics, but lingering discord capped by troubling Islamophobia and a rising tide of anti-immigrant feeling dogged the project, keeping thousands of Muslims crammed into about 120 makeshift prayer rooms set in fetid flats, cryptic cellars and mice-infested warehouses across Athens.

Last year, after a larger and noisier confrontation drew the ire of international action groups - mobs of ultra-nationalist youths marred an open-prayer session, pelting Muslim worshippers with raw eggs, blaring rock music from adjacent apartment blocks and scattering leaflets depicting Muslims as pigs - the government renewed its promise once more, pledging to allocate a plot of land within weeks and launch an international tender for the construction of the mosque in early January.

"The commitment is there," said a senior Defence Ministry official. "But it's plodding through bureaucracy. It will take a long time before it takes on any shape or form."

Under consideration is a 5.3-acre site that the Finance Ministry has been leasing to the Greek Navy for decades and that it has yet to be relinquished to the Education and Religion Ministry, responsible for the project.

"The state has to understand the urgency of the problem," says Naim Elghandour, president of the Muslim Association of Greece. "Most of the Muslim migrants pouring into Greece have escaped persecution and famine, and the last thing they can hold onto is their faith.

"If that goes," he warns, "and if hate crimes continue to block their assimilation, then it's just a matter of time before they go off like a time bomb."

While hate crimes have surged across Europe, a recent survey published by the New York-based Anti-Defamation League criticized Greece and nine other states, including Moldova, Uzbekistan and Ukraine, for underreporting related incidents. In 2009, alone, the survey said Greek police reported "fewer than 10 hate crime incidents."

A fairly homogeneous society bound by a common language, ancient heritage and Christian faith, Greece has seen its ethnic makeup change dramatically in the past decade. Immigrants, both legal and illegal, now account for as much as 15 per cent of the country's population while 90 per cent of the European Union's illegal entries are recorded in Greece, the club's most xenophobic member state, according to Eurobarometer surveys.

"It's a very volatile mix," warns Panayiotis Dimitras, founder of the Greek Helsiniki Monitor group. "Factor in state inertia in tackling the immigration problem and it's no wonder ultranationalists have swooped in with their racism, bigotry and Islamophobia, recruiting even the most moderate, mainstream folks to their cause."

Not far from Mr. Prodan's mosque, Attica Square has become the capital's most heated battleground, pitting avowed chauvinists of the far right against a mélange of Muslim migrants - mainly from Afghanistan, Bangladesh, Pakistan and Somalia.

In the past year alone, ultra-nationalists have hoisted four flags in the square, spray-painted pavements with slogans reading "No foreigners, no mosques" and recruited residents to "keep the square clean," barring migrants from setting foot on the tree-lined square.

"I'm not a fascist," says Anna Gotsi, minding the grounds with her feisty terrier. "But if the state isn't doing its job, then I'm for anyone who will keep me safe, safeguards my job and keep my country Greek."

"Is that unreasonable?" she asks.

With the backlash against Muslim migrants expected to get worse as Greeks struggle to cope with austerity measures, defenders of the mosque project say its construction, in a rundown industrial district four kilometres west of the Athens centre, will help ease tensions and attacks.

"At this point," says Michael Salberg, associate national director of the Anti-Defamation League, "the root cause is irrelevant. Hate breeds hatred and [Greece]has to rise up like an alcoholic and admit it has a serious problem." 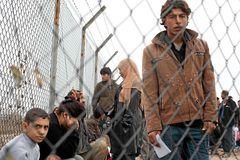 Opinion
Are the Swiss more bigoted than other Europeans? Probably not
December 4, 2009 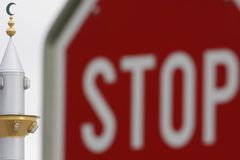