When the refugees swarmed the food truck and the bullets began flying, Duniyo Alosolow was in the middle of it, ducking for cover. "I saw people killed in front of my eyes," she remembers.

"Anyone who is strong and had a gun took the food," she said at the sprawling refugee camp in Mogadishu where she lives. "We aren't strong, so we didn't get the food."

Up to 10 people were killed by government troops and private militiamen in the gunfight last month as the gunmen and the refugees looted the first delivery of United Nations food rations to famine victims at the Badbaado refugee camp.

Since then, the UN has not dared to distribute rations to the 30,000 people at the camp, leaving them dependent on a single daily meal from its kitchens. Hunger is rising, forcing many desperate refugees to walk for hours to other camps in search of food.

Yet hundreds of sacks of flour, donated by Arab countries, are stacked high in a metal shed at the camp. The refugees say they never receive flour – despite claims by camp officials that the food is regularly distributed. Theft and corruption is said to be rampant at the camp.

Getting aid into the Somalia famine zone, and into the hands of the neediest, is one of the most difficult challenges of this crisis. A massive airlift has been launched, with an average of 10 to 12 aid flights landing every day at Mogadishu's airport, but the problem is getting the aid to the people. Even after Islamist insurgents retreated from Mogadishu last month, the city remains one of the most violent and corrupt in the world.

The shooting at Badbaado was just the first of three deadly incidents at Mogadishu's feeding centres in recent weeks. On Thursday, five famine victims were shot dead by a Somali soldier as they began pushing and shoving for food at a distribution site. "It was a barbaric and unacceptable act," a government minister said. And three other refugees were killed by government forces in a similar incident on Aug. 22 at another food site.

"Compared to this, Haiti was a piece of cake," says one veteran aid worker who has served both in Mogadishu and in Haiti's earthquake disaster last year.

"In Haiti, you could move around," he said. "Here you can't get around, because you're a target. Somalis don't want to talk to you because they're under constant threat. This is a crazy conflict zone, with all these players, all these guns, and you can't keep track of them."

Hundreds of people are dying every day in Somalia's famine, and a further 750,000 could die in the next few months. The UN has estimated that four million people, more than half of the country's population, are living in Somalia's famine zones – mostly in the south of the country, still controlled by the Islamist extremists who have prohibited any foreign food aid.

But nearly 500,000 refugees are in Mogadishu itself, in more than 200 informal camps, which have themselves been declared a famine zone. And those camps are so dangerous that most foreign relief workers are unwilling to visit them.

The UN's food agency, the World Food Program, continues to prohibit its foreign staff from moving beyond a heavily fortified military base at Mogadishu's airport. Fourteen of its staff have been killed in Somalia since 2008.

The agency's work in Somalia is hampered because it is having trouble finding any shipping companies that will take the risk of sending their vessels into Mogadishu through the pirate-infested waters. And inside the city it must work with local Somali partners, dividing its food distribution into smaller deliveries in an unpredictable pattern to prevent looting.

Much of the violence comes from the Islamist rebels, known as al-Shabab, who continue to launch occasional grenades and bombing attacks in Mogadishu. With no clear front line between the rebels and government forces, the fighting has become dangerously unpredictable. One woman was killed last month by a roadside bomb near a feeding centre in the city, apparently set by the Islamist radicals. And another 11 civilians were beheaded by the rebels, who still control the outskirts of the Somali capital and most of the southern half of the country.

But with guns everywhere, the rebels are far from the only threat. Last week, a Malaysian television cameraman who was following an aid convoy was shot dead in the centre of Mogadishu by a soldier from the African Union peacekeeping force who mistakenly opened fire on the convoy. Local officials, including powerful warlords, are another threat. A few days ago, a gunfight erupted in the middle of the city in a dispute over an illegal checkpoint, set up by a private militia to raise money for the warlord who employs them.

Even one of the most courageous and independent of the relief agencies, Médecins sans frontières (Doctors Without Borders), does not allow its foreign staff to stay in a refugee camp for more than 30 minutes because of the danger that they could be detected by bandits or rebel infiltrators. Their movements around the city are kept unpredictable to prevent ambushes. Each of its local Somali teams is protected by armed guards whenever they work in the camps.

"The frequency of incidents is having an impact," said Alan Lefebvre, emergency co-ordinator at the agency's Mogadishu office, who says he sometimes hears explosions at night within a few blocks of his compound. "There are a lot of weapons in circulation."

Most relief agencies suspended their operations in Somalia in 2009, following a series of attacks on their aid workers by the Islamists and other armed factions.

"When the famine was announced in July, those agencies no longer possessed the networks and infrastructure necessary to operate in the country," said a recent analysis by Ken Menhaus, a U.S. scholar and former UN adviser on Somalia. "The organizations that remained had only a limited presence and could not boost their capacity on such short notice to deliver the amount of aid necessary to end the famine."

Beyond the risk of violence, there are logistical obstacles too. Because of a shortage of aviation fuel at Mogadishu airport, for example, the humanitarian flights are landing with a lighter cargo than they could bring, in order to fly back without refuelling.

Paradoxically, one of the biggest problems is the uncontrolled proliferation of aid donations in Mogadishu, led primarily by donors from Islamic nations who wanted to fulfill their religious charity obligations during the Islamic holy month, which just ended. Some wealthy Arab donors have shown up in Mogadishu with bags of cash to distribute. Others are buying most of their food in the Mogadishu markets – inadvertently driving up the price of food in the city, which hurts the Somali population.

"It's a big problem because there is nobody to account for the aid," says Jabril Ibrahim Abdulle, director of the Center for Research and Dialogue, a Somali think tank.

"Some refugee camps are overwhelmed with food, while others have hardly any. No co-ordination whatsoever is taking place."

He worries that the influx of foreign food aid could expand the power of Mogadishu's warlords, as it did in the last famine in 1992. "When a huge amount of food arrives without accountability, it creates warlords. It could be the legacy this time too." 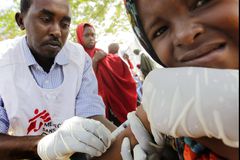