The royal marriage of Prince Harry and Meghan Markle is still four months off but it's already proven to be a boost for bookmakers who are expecting a banner year for betting on royal events.

Prince Harry and Ms. Markle's wedding is on May 19 at Windsor Castle and betting companies are already taking wagers on everything from whether Prince Harry will still have a beard to the colour of Ms. Markle's dress and if it will rain on their wedding day.

And the wedding isn't the only big royal happening in 2018 that punters can wager on. In April, the Duchess of Cambridge is expecting her third child and bettors are putting money on the name and sex of the child as well as when he or she will be born. For now, the smart money is on the baby being a girl named Alice born at the end of the month.

Royal events typically generate much interest among bettors and the money put down on a name or event can prove remarkably accurate and lucrative for those involved. Betting on the name of Prince George before his birth in 2013 totalled roughly £5-million ($8.5-million), making it one of the largest bets on a royal happening.

"A lot of people think it's a novelty market, it's just a bit of fun, but actually it is a big business," said Rupert Adams of betting company William Hill Plc. "The proof is in the pudding, is that whether it be political betting, whether it be royal betting, invariably the favourite at the end is the eventual winner. So it is generally relevant." Mr. Adams pointed out that the names Charlotte and George were the betting favourites for the last two royal babies, and both turned out to be correct.

Mr. Adams added that betting on the royal wedding and the royal baby this year will likely generate more than £5-million in total wagers. While that's substantial, it's small change compared to betting on sports such as soccer, where one big match can pull in more than £20-million worth of bets. This summer's World Cup is expected to rake in about £1-billion worth of bets.

When it comes to the royal wedding, there's almost no limit to what bookies will take a bet on. Punters can wager on who will be Prince Harry's best man, whether it will rain on the wedding day and if Prime Minister Justin Trudeau will get an invitation (right now, the odds are 6/4 that he will). There are also bets on whether former U.S. president Barack Obama will be invited, something that has become a tricky issue in the United Kingdom. Mr. Obama is considered to be a friend of Prince Harry but there is concern that an invitation could upset current President Donald Trump and hamper U.K.-U.S. relations.

There are also bets available for the name of Harry and Meghan's first child, and whether they will have a baby this year. Bets on how long their marriage will last haven't been made yet, but when Prince William and Kate Middleton married in 2011, there were bets then that their marriage would last 20 years.

Bets like this can be high risk for the companies involved since the correct information can leak out, giving some people an advantage. And there is nothing illegal about betting with insider information. If someone in the royal household knew that the Duchess of Cambridge was expecting a girl in April, there is no law preventing that person from placing a bet. However, as a result, the companies usually limit betting or payouts on these types of events. William Hill has set a maximum bet on anything related to the royal wedding at £50. That's probably high enough since on average most people betting on these types of so-called novelty events put down about £8.

Prince Harry and Ms. Markle's wedding has caused a stir beyond betting companies. It's also prompted a scandal in an unlikely place; the United Kingdom Independence Party (UKIP). On Monday, the party's leader, Henry Bolton, announced that he was ending his relationship with his girlfriend, UKIP member Jo Marney, after The Mail on Sunday revealed she'd sent racist texts about Ms. Markle. Ms. Marney, 25, has apologized and said her comments were "deliberately exaggerated in order to make a point."

Mr. Bolton, 54, told media outlets on Monday that the "romantic element" of their relationship was over but he rejected calls to resign as leader. He was elected leader last summer after UKIP's disastrous showing in the June election, when the party won just 1.8 per cent of the vote. 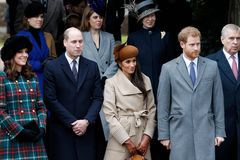 Windsor official wants beggars removed before Prince Harry, Meghan Markle wedding
January 4, 2018
Follow Paul Waldie on Twitter @PwaldieGLOBE
Report an error Editorial code of conduct
Due to technical reasons, we have temporarily removed commenting from our articles. We hope to have this fixed soon. Thank you for your patience. If you are looking to give feedback on our new site, please send it along to feedback@globeandmail.com. If you want to write a letter to the editor, please forward to letters@globeandmail.com.
Comments are closed