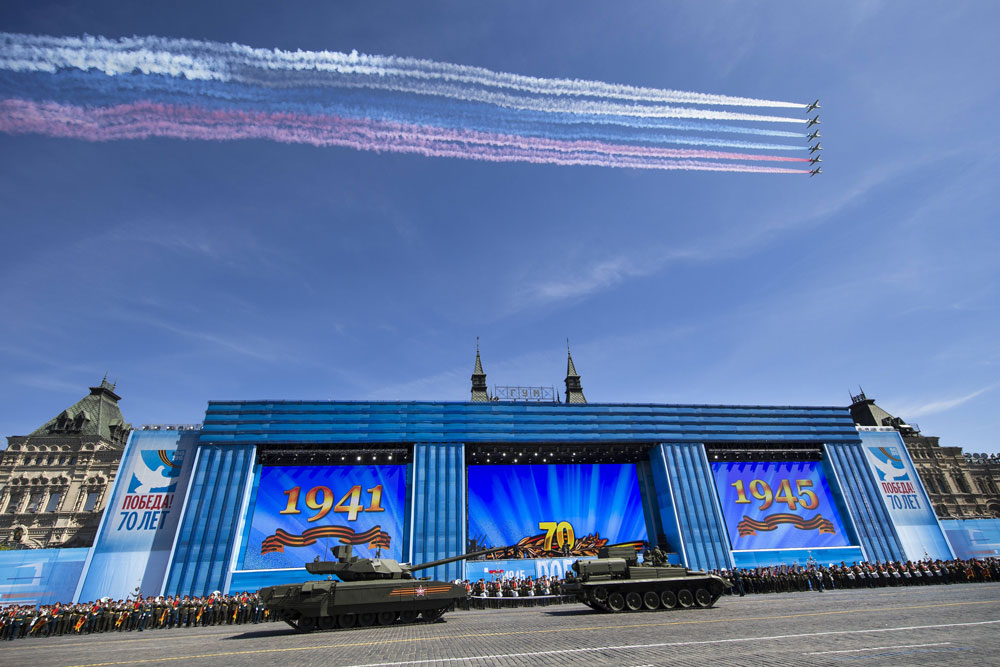 
Russia parades
while the West watches


As Russia prepares to commemorate the 70th anniversary of the end of the Second World War with the Victory Day parade, Mark MacKinnon reports the absence of its wartime allies highlights ‘today‘s unstable and restless world’

When Russia celebrated the 60th anniversary of the defeat of Nazi Germany, the 2005 Victory Day parade was well-attended by Western leaders. U.S. president George W. Bush, French president Jacques Chirac and chancellor of Germany Gerhard Schroeder all stood shoulder to shoulder with Russian President Vladimir Putin in commemoration of the 26 million Soviet soldiers, sailors and airmen who died during the war.

A decade later, amid tensions over Russia’s 2014 annexation of Crimea and the continuing conflict in eastern Ukraine, attendance for Russia’s Victory Day parade will be very different. 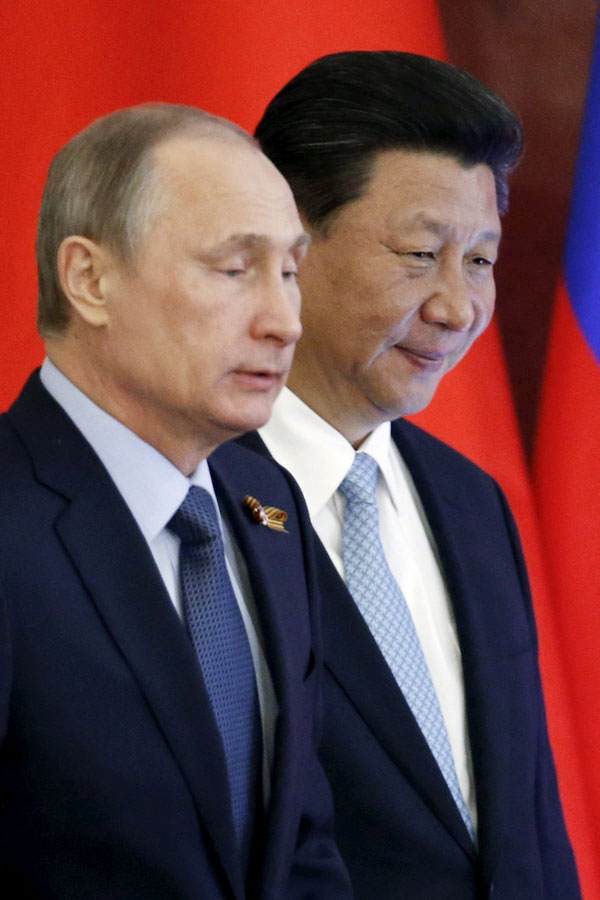 President Xi Jinping will be one of the most important guests at the celebrations, reflecting the growing importance of ties between Russia and China.

President Mukherjee will attend the ceremony, but he is also in Russia to establish ties between the countries’ universities.

UN Secretary-General Ban will also be in Moscow for the parade, despite protests from Ukraine’s government.

Who's not
United States

President Obama will not attend in protest of Russia’s actions in Ukraine.

Prime Minister Stephen Harper is not attending. Canada and the U.S. will be represented by their ambassadors.

Leaders from France and the U.K. have declined to attend – besides the president of Greece, no EU leaders will be atthe parade.

The German chancellor will not attend the parade, but will pay her respects at a war memorial in Moscow the following day.

Russia’s military might will be on display Saturday in a massive parade in Moscow to mark the 70th anniversary of the defeat of Nazi Germany. But instead of evoking the unity that saved Europe decades earlier, this year’s Victory Day celebration will highlight the deep divisions between the countries that led the grand coalition against Hitler, with each side accusing the other of ignoring the lessons of history.

Some 16,000 soldiers are expected to march across the cobblestones of Red Square, saluting President Vladimir Putin as they pass. They will be followed by hundreds of armoured vehicles – including the country’s newly unveiled Armata battle tanks and fighting vehicles – as well as at least three intercontinental ballistic missiles. The sky over the Russian capital will see more than 140 flybys by military jets and helicopters.

Absent from Russia’s grand commemoration will be the heads of the Western governments that were its allies in the Second World War, with the leaders of the United States, Britain, France and Canada all staying away in protest against Russia’s actions in Ukraine over the past year. German Chancellor Angela Merkel, who is in a more sensitive position because of her country’s wartime history, will also miss the parade, though she is expected to arrive in Moscow on Sunday to lay a wreath at the Kremlin wall.

In a sign of how isolated Russia’s position in Europe now is, even Belarusian President Alexander Lukashenko – long considered the Kremlin’s closest ally – has sent his regrets to Moscow, preferring to remain in Minsk to oversee Belarus’s own May 9 celebrations.

The boycott will feed an angry battle over history that is being fought alongside the very real war in eastern Ukraine. Pro-government fighters and Russian-backed rebels each refer to the other as “fascists” while trading accusations of Nazi-like behaviour, including war crimes.

Russia accuses the West of supporting a government in Kiev that includes ideological descendants of the Ukrainian Patriotic Army, a nationalist group that briefly fought alongside the Nazis during the Second World War, hoping to secure Ukraine’s independence from the Soviet Union.

Polish President Bronislaw Komorowski, who is among the leaders staying away from the celebrations in Moscow, said Red Square will turn into what he called “an armoured square,” adding: “There will be those units that recently attacked neighbouring Ukraine in front of us and the whole world, demonstrating their force. It has been a long time since a military conflict was as close to the Polish borders as now.” He called the parade “the image of today’s unstable and restless world.”

Mr. Putin, for his part, accused the U.S. of playing “geopolitical games” and pushing European leaders not to attend the parade. (A decade ago, Mr. Putin played host to U.S. president George W. Bush, as well as German chancellor Gerhard Schroeder and French president Jacques Chirac at celebrations marking the 60th anniversary of the end of the war.)

“Their goal is clear: to undermine the power and moral authority of modern Russia, to deprive her of her status as a victorious country,” Mr. Putin said of the boycott of this year’s parade. The Kremlin is believed to have been particularly irked when the leaders of Hungary and Slovakia, who initially said they would attend, withdrew under heavy U.S. pressure.

Those watching the celebration inside Russia, which has seen its economy battered by months of Western sanctions, will be intentionally reminded of another time their country was under siege, during what Russians call the Great Patriotic War. Then, with the Wehrmacht only a few kilometres from Moscow, Josef Stalin stood on Lenin’s Tomb and watched a similar parade just before the Red Army began to push its foes back.

Efforts have been made to link the fighting in Ukraine with the Great Patriotic War. A Soviet-era military award, the orange-and-black St. George’s ribbon, has been brought out of obscurity over the past year to become the colours of both the pro-Russian side in the east Ukraine war, and of rising patriotism – and support for Mr. Putin – within Russia itself. The ribbon, unseen at the Victory Day celebration a decade ago, now hangs in the windows of cars, shops and cafés across Russia.

“Vladimir Putin feels he is dealing with a conflict that could draw Russia in in a big way. [The parade] serves a dual purpose of telling the outside world that Russia is a serious military power – and not just in nuclear terms … and also telling the Russian people that they have strong defenders and their country is well-protected, because their country is not short of foes today,” said Dmitry Trenin, director of the Carnegie Moscow Centre, a think tank. The sense that Russia is back as a military power was somewhat dented, however, when one of the new Armata tanks stalled during a rehearsal for the parade. 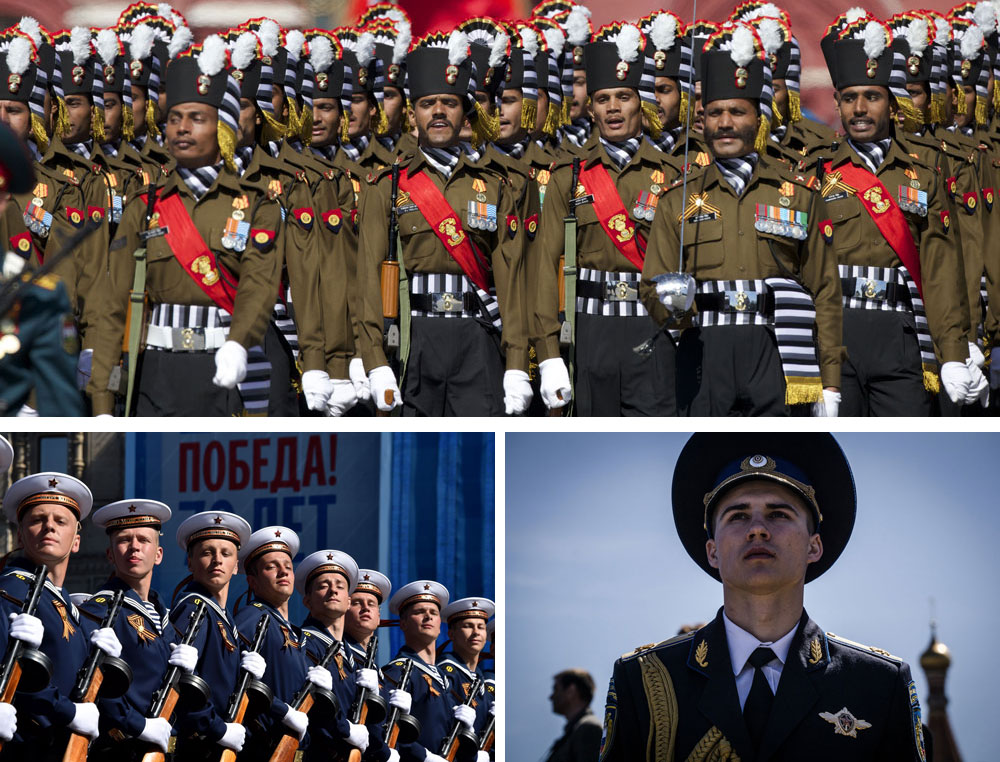 Some 16,000 soldiers are expected to march in the Victory Day parade, including those from India (top) and all wings of the Russian military, including the navy (lower left). (AP/Getty Images)

Tensions will be highest inside Ukraine. Thousands of additional police and soldiers have been deployed around the country to prevent any clashes between those wishing to celebrate the Soviet army’s role as Second World War “liberators,” and those who see the Red Army’s defeat of the Nazis as the start of an occupation of Ukraine that lasted until the fall of the USSR in 1991.

There are fears that fighting could reignite in the eastern regions of Donetsk and Lugansk, which have experienced a period of relative calm since a February truce. Speaking last week to the U.S. Senate Armed Services Committee, NATO supreme commander General Philip Breedlove said he saw signs of a Russian military buildup in Donetsk and Lugansk “consistent with preparations for another offensive.”

Despite the Western criticisms, Mr. Putin will be far from alone Saturday on Red Square. Chinese President Xi Jinping will be the guest of honour, highlighting the growing political, economic and military ties between Moscow and Beijing. (Mr. Putin is expected to reciprocate by attending a September celebration on Tiananmen Square to mark Japan’s surrender and the end of the war in Asia.)

“The most important leader now, to Russia, will be there, and that’s President Xi of China,” Mr. Trenin said. With Moscow isolated from the West, he said, “China is becoming the most important relationship for Russia.”

The Kremlin says two dozen other heads of state, including leaders from BRICS members Brazil, India and South Africa, are expected to attend. UN Secretary-General Ban Ki-moon will also be there, despite a protest from the Ukrainian government.

Several European countries have indicated they may yet send cabinet ministers to the celebration, while Canada and the United States have confirmed they will be represented only by their ambassadors to Moscow.

Military units from China, India, Serbia and Armenia are also expected to march through Red Square on Saturday in a further show of solidarity with Russia. 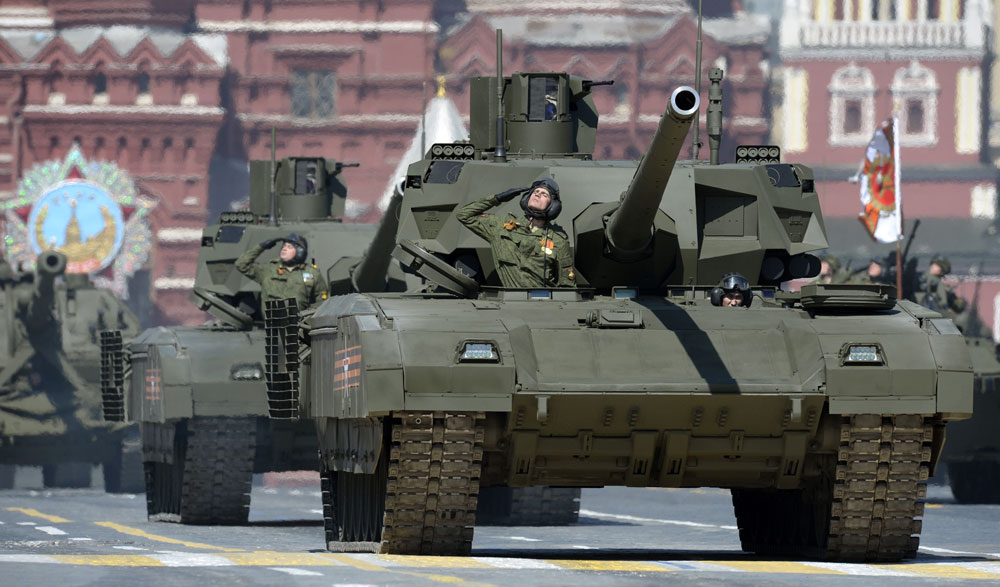 Russia's new T-14 Armata tank drives through Red Square in Moscow, May 7, 2015, during a rehearsal for the Victory Day parade. (AFP)

This year’s Victory Day parade in Moscow is expected to be one of the largest, with a procession of military vehicles, troops and weapons meant to show off the country’s military might. As usual, the parade will feature vintage equipment that was key to defeating Nazi Germany in the Second World War, as well as revealing new weapon systems, including a main battle tank.

The T-14 tank made its first appearance during parade rehearsals. Commanded by a crew of three, the new design represents a new generation of Russian tanks. The T-14 is the first post-Soviet Russian design and claims to have greater speed, manoeuvrability and firepower than its western equivalents. The Armata boasts a 125mm cannon and a top speed of 80-90 km. During rehearsals for the parade, one T-14 appeared to stall for 15 minutes before eventually proceeding under its own power.

The T-34 was the main tank the Soviet army used throughout the Second World War, and its sloped armour design influenced tank development for years to come.

Russian arms producer Kalashnikov is unveiling the modernized AK-74M in the parade. They claim the updated rifle is 50 per cent more accurate at distances up to 300 metres.

The new Crimean Wings aerobatic team will make their debut in Saturday’s parade, flying over the Red Square in Moscow in a four-plane formation of Yakolev Yak-30 jets.

With files from Madeline Smith