"Peace to the people of Syria!" read the banners decorating the former Olympic city of Sochi this week. The greetings were written in Arabic and English, as well as Russian, but the peace discussed here was one that – if it ever came to pass – would be on Moscow's terms.

A quick end to Syria's war was never on the agenda of the Kremlin-sponsored "Syrian National Dialogue Congress," which was attended by delegations from Iran and Turkey, as well as United Nations envoy Staffan de Mistura and various Syrian factions, most of them pro-government.

But the fact that the gathering was held in this Black Sea resort testifies to the clout Russia has gained since President Vladimir Putin first sent troops and planes to rescue Bashar al-Assad's crumbling regime 2 1/2 years ago. Even more telling was the lack of concern over the absence of the United States and its allies.

The era of everyone worrying what Washington thinks is over – at least in Syria, where Russia's air force has dramatically tilted the war in Mr. Assad's favour.

Mr. Putin stepped into the void created when former U.S. president Barack Obama decided not to intervene. And now – with Donald Trump's White House showing little interest – the Kremlin has emerged onto another stage left dark by the U.S.: the host and patron of Middle East peace conferences.

"Nothing is working out for the United States in the Middle East. For us, it's working well. Everything," said Vitaly Naumkin, a veteran Russian diplomat who advises Mr. de Mistura while also representing the Kremlin's interests.

With America focused on its domestic problems – and Mr. Trump's confrontationalism costing his country friends abroad – Moscow sees an opening for itself to play power broker in the broader Middle East and beyond.

Israeli Prime Minister Benjamin Netanyahu was in Moscow on Monday to meet with Mr. Putin, on the eve of the Sochi summit, and to deliver a warning to Iran via Mr. Putin that Israel would act militarily if Iran kept building up its presence in Lebanon.

Mr. Netanyahu may also have left a message for Mr. Putin to pass on to Palestinian President Mahmoud Abbas. Mr. Abbas has said Mr. Trump's announcement that he would move the U.S. embassy in Israel from Tel Aviv to Jerusalem next year meant the U.S. had abdicated its role as peacemaker between Israel and the Palestinians.

Mr. Naumkin said Mr. Abbas will travel to Moscow early in February, part of a parade of visitors that has also seen the leaders of Saudi Arabia, Egypt and Jordan make trips in recent months. "We are doing our best to take some initiatives," Mr. Naumkin said.

Russia also recently offered to host talks between the Afghan government and the Taliban, meaning the famously expensive facilities in Sochi (the 2014 Winter Olympics here cost a record US$51-billion) could yet see more peace banners and foreign diplomats. As one of the few countries that maintains diplomatic ties with North Korea, Russia is also an indispensable player in that escalating showdown.

"They come to Russia not because they love Moscow; it's because they realize who the main guy in town is right now. Russia is essential to any future settlement in the Middle East," Fyodor Lukyanov, editor of the influential Russia in Global Affairs journal, said of the leaders streaming in to see Mr. Putin.

Russia's new centrality, Mr. Lukyanov said, was only partially attributable to the success of its own foreign policy. "The Russian role is not entirely, but to a certain extent, a function of American disinterest."

Ian Bremmer, the head of the New York-based Eurasia Group, a global political-risk consultancy, was more skeptical of how much progress could be made in the absence of American diplomacy and – more importantly – U.S. economic clout. "It's not that nothing can happen without the Americans, it's just that the Americans are much more experienced and have much more capability, and are much more willing to try and be seen as an honest broker," Mr. Bremmer said in a telephone interview. "The Russians are in it much more clearly for their own interests."

But with the Trump administration reticent to expend effort on resolving Syria's war, it's Russia that regional players are looking to.

But Sochi is not yet ready for comparisons to Camp David, and it remains safe to predict there are no Nobel Peace Prizes in Mr. Putin's future. The Kremlin made itself essential in Syria by bombing those opposed to Mr. Assad, and by paying little attention to the civilian cost as it did so.

None of that has been forgotten by Mr. Assad's opponents, and a complete end to the fighting – which has killed upwards of 400,000 people since 2011 and driven some 11 million from their homes – is still a long way off. Russia was also a guarantor of the deal that was supposed to remove chemical weapons from the conflict, though alleged use by the Assad regime has continued.

Most of the rebel groups that retain significant fighting capacity stayed far away from this week's gathering. (The good news is that the Syrian-born group known as Islamic State, defeated on the battlefield, barely merited a mention in Sochi.)

Some rebels did agree to attend – after having their arms twisted by their Turkish patrons – but turned around at Sochi airport after catching a glimpse of the meeting's logo: an angry-looking dove flying in front of the Assad regime's flag. Other Assad opponents who arrived heckled Russian Foreign Minister Sergei Lavrov during his opening remarks, shouting that bombs were falling on civilians at that very moment.

The U.S. and other Western governments sent only low-level diplomatic representation (Canada had no one in attendance). Also absent were Saudi Arabia and the Gulf Arab states that have provided financial support to the Sunni Arab rebels battling Mr. Assad's regime, which is dominated by followers of a sect of Shia Islam.

They were missed mostly for their wallets, as none of Russia, Turkey or Iran is in a financial position to lead the reconstruction of the Syrian cities they helped to shatter. Mr. Naumkin lashed out at Western governments for refusing to help rebuild areas that are under the control of the Assad regime.

But the absence of the U.S. and its friends matters a lot less now than it would have prior to Russia's 2015 intervention.

Mr. Assad and his allies – including Lebanon's Hezbollah militia and other Shia Muslim fighters loyal to Iran – now control upwards of 70 per cent of Syria's territory. Three years ago, Damascus could only claim about half the country.

The rebels backed by the U.S. and its allies in the Gulf are no longer a substantial factor on the ground. Most groups still fighting the regime get their support from Turkey, which is more concerned with preventing the creation of a Kurdish mini-state in northern Syria than with toppling Mr. Assad.

(Turkey sent tanks and troops into northern Syria this month to push U.S.-backed Kurdish fighters, whom Ankara considers "terrorists," away from its borders. Moscow has struggled to conceal its delight as NATO allies Turkey and the U.S. – which has special forces embedded with the Kurds – have neared conflict.)

Moscow's postwar vision started to become clear at the Sochi summit, which ended with the creation of a 150-member body tasked with drawing up a new Syrian constitution.

Where UN-sponsored negotiations in Geneva – which have gone nine rounds without a breakthrough – foundered each time over the opposition's demand that Mr. Assad leave power, there was no such talk in Sochi, where Mr. Assad's continued presidency was assumed. Two-thirds of the 150-member constitutional committee will be Mr. Assad's allies.

The Kremlin's idea of reconciliation, said Joshua Landis, a Syria expert at the University of Oklahoma, is the opposition's "acceptance of defeat."

Leaving Mr. Assad in power would deliver Russia its key war aim, as well as granting Iran its goal of preserving a Tehran-Baghdad-Damascus-Beirut arc of Shia-dominated governments willing to follow its lead.

Russia also seems certain to keep its Hmeymim air base in the northwest of the country, as well as its Mediterranean Sea naval hub at Tartus. That would give Moscow the ability to oversee Syria for the foreseeable future, an arrangement Mr. Naumkin compared to the U.S.'s 17-year-old presence in Afghanistan.

In other words, Russia's keenness to end the war in Syria is far from altruistic. There are also domestic concerns for Mr. Putin, who faces an election this year. Facing a Kremlin-approved field of candidates, Mr. Putin is expected to win handily – but with Russia entangled in Ukraine too, his support level will be keenly watched for signs of growing discontent.

"The Syria issue has become a burden for Russia," said Alexander Shumilin, director of the Moscow-based Center for the Analysis of Middle East Conflicts.

Not only is the war unpopular, it is also a drag on the country's struggling economy. "Russia," Mr. Shumilin said, "needs a way out." 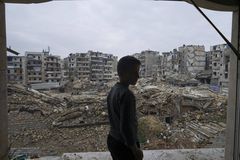