The annual Victory Day parade in Moscow – which on Monday saw columns of battle tanks and intercontinental ballistic missile launchers roll across the cobblestones of Red Square – always contains a message for the outside world about Russia's military might, which has recently been put to use in Ukraine and Syria.

But this year's spectacle, marking the anniversary of the defeat of Nazi Germany, also contained a clear warning for the Kremlin's domestic opponents.

Marching in formation among the more than 10,000 soldiers who saluted President Vladimir Putin as they passed his viewing platform were 400 members of Russia's newly formed National Guard, the vanguard of a 180,000-strong force that reports directly to Mr. Putin. Critics say the new unit – which is commanded by the former head of Mr. Putin's personal security detail – is effectively a presidential praetorian guard meant to crush any protests that arise out of elections scheduled for this fall.

Mr. Putin created the National Guard with an executive order on April 21, pulling together divisions that had been under the direction of the Interior Ministry. Shortly afterward, it was announced that members of the National Guard would get upgraded equipment in the form of new-generation AK-74M assault rifles. Legislation was introduced that, if passed by the State Duma, would allow guardsmen to shoot into crowds under certain circumstances.

Analysts say the creation of the National Guard highlights Mr. Putin's paranoia about the possibility of an internal challenge to his power.

Mr. Putin, who has ruled Russia as either president or prime minister for 17 years, briefly saw his authority challenged after the last Duma elections in 2011, when tens of thousands of opposition supporters took to the streets of Moscow to protest what they saw as a rigged vote. Mr. Putin accused Hillary Clinton, then U.S. Secretary of State, of personally fomenting those demonstrations.

The Kremlin believes the United States also instigated the 2014 uprising in Ukraine that ousted the Moscow-backed government of Viktor Yanukovych, as well as a series of other recent "colour revolutions" (a term used to refer to uprisings that rally around a colour or other symbol) that deposed autocrats in Eastern Europe and the Middle East.

The National Guard's unspoken assignment is to ensure that Mr. Putin is not the next leader to be toppled by his own people. Mr. Putin told his security chiefs earlier this year that "foes abroad" were preparing to disrupt the Sept. 18 Duma elections.

The unit's creation also comes on the heels of the so-called Panama Papers leak, which saw friends and relatives of Mr. Putin connected in media reports to offshore transactions worth $2-billion (U.S.). Mr. Putin called the Panama Papers an "information product" that represented "one more attempt to destabilize the internal situation" in Russia.

"The Kremlin sees colour revolutions, conducted by Western intelligence, as a new type of warfare," Alexander Golts, an independent military analyst based in Moscow, said. "Believe me, they are very serious in this paranoia. And if there is this new type of warfare, you need a unit to fight it."

Mr. Golts says the Kremlin remembers how Soviet generals mutinied and refused to shoot protesters during a failed coup d'état in 1991 that accelerated the collapse of the Soviet Union. By appointing his personal security chief, Viktor Zolotov, to head the National Guard, Mr. Putin is trying to ensure his orders will be carried out under any circumstances.

While political opposition is weak and scattered – there is currently just one Putin opponent in the 450-seat parliament – the Kremlin is believed to be increasingly nervous about the country's prolonged economic downturn, which has been caused by low oil prices and Western sanctions over Russia's 2014 annexation of the Crimean Peninsula from Ukraine. Russia's economy is expected to shrink by 1.8 per cent this year after contracting 3.7 per cent in 2015.

Mr. Putin's personal approval ratings remain near 80 per cent, however, in large part due to public support for his military adventures in Ukraine and Syria, where Russian troops and warplanes have boosted the battlefield fortunes of President Bashar al-Assad's regime since entering the five-year-old civil war last September.

Mr. Putin announced in March that Russia would begin withdrawing its forces from Syria, saying their mission had largely been "fulfilled." However, Russian warplanes are still carrying out regular bombing runs against Mr. Assad's enemies.

A Russian orchestra was flown to Syria last week for a triumphant concert in the theatre of Palmyra, an ancient Roman city that Mr. Assad's forces – aided by Russian air power – recently recaptured from the so-called Islamic State. The concert was attended by Russian soldiers and some international media.

Monday's parade on Red Square included a flyby with warplanes that have flown sorties over Syria. A smaller Victory Day parade was also held at the Russian air base in Syria's coastal province of Latakia.

"The rank-and-file people like this war," Mr. Golts said of the conflict in Syria. "We're in a real militaristic hysteria." Russian offer to send heavy water bombers to Fort McMurray in limbo
May 9, 2016 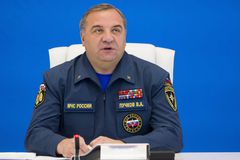