Leading Bolshoi ballerina Svetlana Lunkina declared on Tuesday that she is abandoning Russia for the sanctuary of Canada, a move reminiscent of the Cold War, when dancers routinely made headlines by defecting from the harsh political climate of the Soviet Union for greater personal and artistic freedoms in the West.

Ms. Lunkina, a principal dancer for the famous dance company, which was caught up in violence earlier this month when its leader was injured in an acid attack, told a Russian newspaper that she was receiving threats on a matter not related to the dance company.

The dancer already has ties to the country and its dance community.

"I've known of her a long time," said Vanessa Harwood, a former leading National Ballet of Canada principal dancer. "It's not conjecture that she'd like to settle in Canada; she's already here."

Sources close to the couple confirm that Ms. Lunkina and her producer husband, Vladislav Moskalev, have staked roots in Canada for several years.

Documents obtained by The Globe and Mail show that, since 2010, they have owned a million-dollar home in Kleinburg, Ont., a wealthy community about an hour's drive north-west of Toronto.

There, in October, they also registered a business, a dance school that appears to have never opened.

Their two children – a boy who is almost nine and a girl who will turn three in April – were born in this country, making them Canadian citizens.

Sources say Mr. Moskalev, 45, has had a Canadian passport for the past 20 years, and that Ms. Lunkina, 33, is a permanent resident.

Ms. Lunkina did not respond to a request for an interview.

She has work papers, says former National Ballet dancer Kevin Pugh, who has hired Ms. Lunkina to teach the advanced Level 5 class as part of the Dance Teq ballet program he operates at the Walter Carsen Centre in downtown Toronto.

She taught the ballet class in late November when she subbed for Mr. Pugh after he fell ill.

Previously, she attended the class two to three times a week to take barre alongside some of Canada's leading ballet dancers.

Mr. Pugh said he had no prior knowledge of her.

"I didn't know that she was a principal dancer with the Bolshoi," he said.

But she stood out. "Everyone was staring at her," Mr. Pugh continued. "She has beautiful extension, and she's lyrical and strong. She can turn. Everything about her was perfect – her placements, her legs. Her dancing speaks for her."

Ms. Lunkina has also taken company class at the National Ballet and there is speculation in the dance community that she is in line to join the Toronto-based company.

"We let Ms. Lunkina take class at the company, as we do for visiting dancers as that is customary in ballet and a courtesy," said company spokeswoman Catherine Chang, "but have no knowledge of her present situation or plans."

Ms. Lunkina gave hints of what her plans might be in an interview published on Tuesday in the Russian newspaper Isvestia, in which she said she had fled to Canada fearing for her own future as a ballet dancer.

She said her e-mails and Facebook page have been hacked into, and that in Moscow – where the ethereal dancer, internationally celebrated for her flawless interpretation of Giselle, has been a star dancer since 1997 – she has faced blackmail.

"We need to react to these threats," she said, explaining why she is taking a leave from the Bolshoi.

Her plight has become linked with that of her boss, the celebrated Bolshoi ballet chief Sergey Filin, who two weeks ago was disfigured when an assailant tossed acid into his face.

Mr. Filin pinned his persecution on the veiled backstage violence of the ballet world where the 42-year old artistic director was once an eminent dancer.

In Ms. Lunkina's case, the alleged intimidation appears to stem from a dispute involving her husband and a business partner. 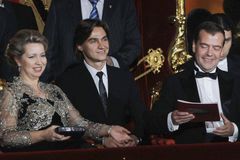