There is a scripted feeling to everything about Russian politics as Vladimir Putin enters his 18th year in power and goes through the motions of an election that will almost certainly see him claim another six years in office.

Part of the script now involves occasional and loud anti-Putin demonstrations in Moscow and around the country, led by an opposition leader, Alexei Navalny, who arrives at the protests knowing he'll be jailed as soon as he's spotted by police.

Everyone played their parts on Sunday. Protesters marched, Mr. Navalny was grabbed as he walked along Tverskaya Street and wrestled onto a waiting police bus, and the Kremlin carried on preparing for an election that's seven weeks away – and of which everyone already knows the result.

But the potential to one day change the way Russian politics is played lies in the youth of Mr. Navalny's supporters.

"We need free and fair elections that real people can take part in – right now we don't have that," said 19-year-old Timofei Frolovichev as he stood on Moscow's Triumfalnaya Square waving Russia's tricolour flag. "Putin's been violating the Constitution for a while now. His mandate is over."

Despite text-message appeals that were sent to parents, warning them to keep their children away from the protest, many of those who marched through Moscow's streets on Sunday were teenagers like Mr. Frolovichev. They are part of a generation that has grown up knowing no other ruler than Mr. Putin – and they came into the streets to say they're bored with the script, and plan to boycott the March 18 presidential vote.

"We're tired of Putin," said Ekaterina Borisova, a 26-year-old who came to the protest clutching white flowers that she tried to hand to a police officer. The offer was refused.

Mr. Putin, who has ruled this country as President or Prime Minister since 1999, will be 72 at the end of another six-year term. Later this year, he will surpass Leonid Brezhnev's 18-plus years in office to become Russia's longest-serving leader since Joseph Stalin.

"This doesn't change anything," Mr. Navalny tweeted after he was predictably arrested for organizing a gathering that had been denied an official permit. His supporters carried on to march alongside the wide boulevards of the Russian capital, chanting "Putin is a thief!" and "Russia will be free!"

Police estimated the crowd at 1,000 people – and while there appeared to be several times that many, the protest was nonetheless smaller than those called by Mr. Navalny in past years. The demonstrators were watched by a similar number of riot police, many of whom wore the uniforms of Russia's National Guard, an internal security force that was created in 2016 and which reports directly to Mr. Putin himself.

Mr. Navalny, a 41-year-old anti-corruption campaigner who became a national figure by highlighting election fraud during 2011 parliamentary elections, was disqualified from taking part in this election because of an embezzlement conviction that he and his supporters say was politically motivated.

His allies said they were planning rallies in 115 cities across the country on Sunday, and demonstrations took place in cities as far-flung as St. Petersburg, on the Baltic Sea, Murmansk, inside the Arctic Circle, and Vladivostok, seven time zones away on Russia's Pacific coast.

The protest in Moscow was peaceful – other than the brief scuffle as Mr. Navalny was detained – and carried on for hours as participants marched in a loop around the city centre ignoring police shouts for them to disperse. At least 185 people were arrested at the demonstrations around the country. Mr. Navalny's lawyer said her client was later released without charge, but would have a court appearance at a later date. If charged with holding an illegal demonstration, Mr. Navalny could face up to 30 days in jail.

There are signs that this country is changing, even if its leadership isn't. One recent survey by the state-backed Russian Academy of Sciences found that 51 per cent of Russians – and 62 per cent of those under the age of 30 – now think reforms are more important than stability.

It was the first time in 15 years that a majority chose change over stabilnost – a word that has become synonymous with having Mr. Putin in the Kremlin, and a one-word explanation for why he should remain there.

Stability has been harder to come by in recent years as Russia's confrontation with the West has deepened. Mr. Putin's 2014 decision to annex the Crimean Peninsula from Ukraine was popular at home, but the resulting economic sanctions imposed by the United States, Canada and the European Union have combined with low oil prices to batter Russia's economy.

The country's gross domestic product fell for three consecutive years before staging a modest rebound in 2017. Meanwhile, ordinary Russians saw popular products disappear from their grocery shelves as the Kremlin banned Western agricultural products as part of its own counter-sanctions.

Change is unlikely to come via the election. With Mr. Navalny barred from the race, Mr. Putin faces a field that includes Pavel Grudinin, an agriculture tycoon who was named the Communist Party's candidate, and Ksenia Sobchak, a celebrity journalist and a controversial opposition figure who also happens to be the daughter of Mr. Putin's political mentor.

At least Mr. Grudinin and Ms. Sobchak represent new names on the ballot. Veteran liberal candidate Grigory Yavlinsky is making his third run for the presidency, while nationalist firebrand Vladimir Zhirinovsky – a de facto political ally of Mr. Putin's – is running for the sixth time. Neither has ever won so much as 10 per cent of the vote.

Polling conducted by the state-run Russian Public Opinion Research Centre suggests Mr. Putin is on course for an easy win, with 73 per cent of the vote. That would represent a rise of 9 points on the 64 per cent he won in 2012. (Only official polls will be done during the campaign after the independent Levada Centre declared earlier this month that it would cease activity during the election campaign after being labelled a "foreign agent" for taking money from U.S. sources.)

With Mr. Navalny calling on his supporters to stay home, the level of participation – which was 65 per cent in the past presidential election – will be more closely watched than Mr. Putin's margin of victory.

But Mr. Navalny's call for a boycott has further split Russia's already fragmented opposition. Some would rather support Ms. Sobchak, who has been using her candidacy to raise issues that are rarely discussed in Russian politics. (She spent Sunday campaigning in Chechnya.)

"Some good is coming out of the fact that [Ms. Sobchak] is allowed to be on major Russian TV channels, the propaganda channels, and is saying things that regular viewers have never heard before – like that the Crimea annexation was a violation of international law, and that Putin has been in power too long and that it's time for him to go," said Yevgenia Albats, editor of The New Times, a pro-opposition newspaper.

But Ms. Albats said that Ms. Sobchak's participation nonetheless aided the Kremlin by giving legitimacy to Mr. Putin's inevitable win. "There is no election. It's all fake."

Ms. Albats said the real significance of Sunday's rally was not the size of the crowd in Moscow, but the fact that rallies were held in so many other cities around the country. It's in Russia's vast interior where support for Mr. Putin – and his confrontational foreign policy, as well as the conservative Orthodox Christian ideas he promotes at home – remains stoutest.

Some of Mr. Putin's supporters watched Sunday's protests in disgust.

"This is crazy. Navalny should be in jail – instead they let this happen," said Elena Kokhtaryova, a 60-year-old who watched the opposition protests in Moscow with an angry frown. She said she had heard that Mr. Navalny's supporters wanted to impose "European gay values" on Russia.

Ms. Kokhtaryova said she didn't know why Mr. Putin needed to hold elections at all. "Democracy is a destructive concept," she said. 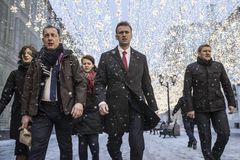 Russian opposition leader Navalny calls for election boycott rallies
December 27, 2017
Kremlin says Putin critic Navalny’s protest call will be investigated
December 28, 2017
Follow Mark MacKinnon on Twitter @markmackinnon
Report an error Editorial code of conduct
Due to technical reasons, we have temporarily removed commenting from our articles. We hope to have this fixed soon. Thank you for your patience. If you are looking to give feedback on our new site, please send it along to feedback@globeandmail.com. If you want to write a letter to the editor, please forward to letters@globeandmail.com.
Comments are closed