Saad Hariri, Lebanon's Prime Minister, returned to home soil after a baffling absence of nearly three weeks only to create more confusion by withholding, at least temporarily, his decision to resign.

The announcement that he would delay his plans to quit both surprised and delighted the Lebanese, who thought the popular Sunni leader had come to Beirut to formally submit his resignation to President Michel Aoun. His apparent last-minute reversal solves one problem – Lebanon has its leader back – but creates another by raising the prospect of an extended political crisis in a small country that has emerged at the centre of a power struggle between Iran and Saudi Arabia.

On Nov. 4, Mr. Hariri, 47, a wealthy Sunni who has both Lebanese and Saudi citizenship and who had cobbled together a unity government a year ago, announced his resignation in Riyadh, the Saudi capital.

On Wednesday, a new plan emerged. "I offered my resignation to President Aoun and he asked me to delay presenting it, to allow for more consultations and deliberations, and I agreed to the request," Mr. Hariri told the media at Baabda Palace, the official residence of the President, shortly after he attended the Independence Day military parade.

His new stance sent his supporters, both Muslim and Christian, into the streets in central Beirut, where they chanted with joy and waved the Lebanese flag. Several thousand people packed the area in front of his house to urge him to stay on as Prime Minister.

"I will give him my blood and my eyes," said Fatmeh Yeha, 56, who is from Tripoli, in northern Lebanon, and attended the rally with her two granddaughters. "He is our leader. He doesn't make any differences between religions. That's why we love him."

Mr. Hariri, the leader of the pro-Saudi Future Movement party, gave no details about his political strategy, leaving Lebanese wondering whether he was simply doing the President a favour by staying put as the hunt is launched for a new prime minister, or whether he truly intends remain as Prime Minister through the next election if he and his Sunni allies can broker a compromise with the two powerful countries, Saudi Arabia and Iran, each of which is trying to make Lebanon its proxy state.

So far it appears that Iran, through its Lebanese political and military arm, Hezbollah, is winning that geopolitical game, much to the Saudis' distress. Hezbollah, which has been called a state within a state, is well-armed and directly or indirectly controls 17 of 30 cabinet positions in the national assembly.

The Lebanese people and politicians across all parties assume that Mr. Hariri was detained by the Saudis and forced to announce his resignation, because they were not happy that his coalition government had provided cover for Hezbollah, which the Saudis assume is backing the Houthi rebels in Yemen. Saudi Arabia has been fighting the Shia rebels for more than two years in a war that has triggered a humanitarian crisis.

Riad Tabbarah, an economist and former Lebanese ambassador to the United States, on Wednesday said Mr. Hariri might be able to secure his job – that is, not resign – if he can negotiate a compromise with the other parties. "But I think it will be a difficult period," he said in an interview. "He will have to satisfy the demands of the Saudis and of Hezbollah. It could take a long time, maybe a few months."

The Saudis want Hezbollah to withdraw their support for the Houthi rebels in Yemen. Hezbollah denies it is giving them support. The Saudis believe a rocket recently fired from Yemen toward Riyadh was provided by Hezbollah or the Iranians, and called it an "act of war."

Mr. Hariri's reappearance in Lebanon, and his decision to postpone his resignation, came after several countries launched intensive diplomatic efforts to de-escalate the tensions between Iran and Saudi Arabia. The international campaign was led by French President Emmanuel Macron, who invited Mr. Hariri and his family to Paris after meeting with Saudi officials in Riyadh on Nov. 9, six days after Mr. Hariri left Lebanon.

Donald Trump also jumped into the fray as the sudden Lebanese political chaos raised the prospect of renewed civil war (the country was crippled by a 15-year civil war that lasted until 1990). "We stand firmly with Lebanon and will continue supporting your country's efforts to safeguard Lebanon's stability, independence and sovereignty," the U.S. President said this week in a message to Mr. Aoun.

Meanwhile, Lebanon's Foreign Minister Gebran Bassil embarked on a tour of Western European capitals to seek support for Mr. Hariri's return and Hassan Nassrallah, leader of Hezbollah, expressed his support for Mr. Hariri. "We are all waiting for the return of the Prime Minister," he said Monday during a televised address. "The priority is for the Prime Minister Saad Hariri to return to Lebanon."

Mr. Hariri claimed he quit because he feared for his life – his father, Rafic Hariri, a former prime minster, was assassinated in 2005 – but most Lebanese suspected his resignation came at the behest of Saudi Arabia's King Salman and the crown prince. Mr. Aoun accused the Saudi government of holding Mr. Hariri "hostage." Other Lebanese politicians and officials said the Saudis had "kidnapped" their Prime Minister, an affront to Lebanon's sovereignty.

Mr. Hariri enjoys widespread cross-party support in Lebanon's national assembly. Even Hezbollah favours Mr. Hariri as prime minister. Hezbollah approved his appointment as prime minister in late 2016 as part of a deal that ended a political stalemate that had lasted 2 1/2 years. 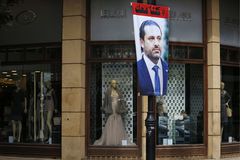 After Macron meeting, al-Hariri says will clarify position upon return to Lebanon next week
November 18, 2017
Analysis
In Lebanon, everyone has a favourite al-Hariri conspiracy theory
November 19, 2017