A crib, a gaggle of baby toys, a poster bearing the 99 names of Allah.

These were the things the killers left behind: mundane ephemera of new parenthood, mundane ephemera of faith. By the time a throng of reporters and random passers-by were allowed into the home, police had taken away the ammunition, the guns, the hard drives. By Friday morning, it was just another messy residential outpost in the endless sprawl of California's Inland Empire.

Two days earlier, the husband and wife who lived here perpetrated the sixth-deadliest mass shooting in modern U.S. history. In the span of about five minutes, more than 75 rounds from the high-powered assault rifles of Syed Farook and Tashfeen Malik left 14 people dead and 21 injured.

A few hours later, the killers were also dead, bringing to a chaotic end the mass shooting, one of an estimated 355 in the United States this year.

On Friday, the FBI officially labeled the shooting a terrorist act. But beyond digital slivers, investigators still struggle to piece together how an introverted environmental inspector and his soft-spoken wife morphed into a pair of indiscriminate killers.

"There's a lot of evidence in this case that doesn't quite make sense," said FBI director James Comey, the man now charged with overseeing a massive homegrown terrorism investigation at a time when looming presidential primaries make for a deeply charged political atmosphere.

The story of what happened in San Bernardino this week is the story of intersecting plagues – Islamist radicalization, political inaction and the ubiquity of guns in the United States.

Lawyers for the family said in a news conference that the pair met through a dating website in 2013. He was a county worker in California, born in Chicago to Pakistani parents. She was born in Pakistan and had spent time in Saudi Arabia. They connected, had shared interests – both were devout Muslims.

A year later, Mr. Farook brought Ms. Malik to the United States on a "K-1," a visa for fiancées of U.S. citizens. Overnight, Ms. Malik's world changed from the conservative social landscape of Saudi Arabia and Pakistan to the endless, mountain-speckled expanse of California.

The Inland Empire, as it is called, is barely the former and not at all the latter. It refers to a network of towns and cities, many of them poor and blue-collar, east of the Los Angeles core.

Scattered throughout the Empire, Mr. Farook's extended family rarely gathered at the small townhouse he rented in Redlands, a city neighbouring San Bernardino. When they did come by to meet Mr. Farook's new wife, they found a woman whose face and hair were covered. She spoke fluent Urdu and broken English. Conservative religious convention meant Mr. Farook's male relatives never saw her face.

It was not just Ms. Malik who kept to herself. Mr. Farook was also quiet. Sometimes, he would speak with his siblings about work – his family says he once told them he was teased by some co-workers about his beard.

"He was a very isolated, introverted individual," said David Chesley, one of the Farook family's lawyers. "None of the family knew of him as being extreme or aggressive.

"We don't have an explanation."

Around mid-morning on Wednesday, Lieutenant Mike Madden of the San Bernardino police department happened to be driving about a mile away from the Inland Regional Center when he received a call from the dispatcher about an active shooter.

"It's something you're never actually prepared for," he said.

Lieutenant Madden called for backup; soon he rushed into the building.

Moments earlier, the San Bernardino County Department of Public Health had been holding a function in one of the rooms. Now, bodies lay strewn in pools of blood on the floor, the air thick with the stale smell of gunpowder and the screams of the wounded.

"When you go into a crime scene like that, it's one of the most heinous things you could ever see," said David Bowdich, who heads the FBI's Los Angeles office. "It's horrific."

The 14 dead represent, in many ways, a microcosm of California's ethnically and religiously diverse suburbs: Juan Espinoza, who moved to southern California from Mexico; Tin Nguyen, who came from Vietnam; Bennetta Betbadal, who at 18 fled to the United States to escape religious persecution in Iran.

Aided by tips from some of the shooting victims, police spotted the duo in nearby Redlands. A subsequent car chase ended just a few miles from the site of the original shooting. After a fierce firefight, both Mr. Farook and Ms. Malik were dead.

Initially, international attention focused on how the two managed to get their hands on so many weapons. But by Thursday, attention shifted to the thorny, still-unanswered question of whether the crime was a direct Islamic State attack on the United States.

In the most bizarre moment of a frequently bizarre press conference on Friday, Mr. Chesley sought to play down Ms. Malik's reported pro-Islamic State comments online, saying that, just because someone looks at something on the Internet, it doesn't mean they support it. "I've checked out a Britney Spears post, and I hate Britney Spears' music," he said.

Mr. Farook's relatives, who say they have received death threats, have deleted their online presence. The couple's six-month-old baby is with Child Protective Services; the family hopes Mr. Farook's older sister will be able to take custody.

Meanwhile, in the 48 hours after the mass shooting, the now-familiar machinery of post-shooting grief, guilt and anger kicked into gear.

At a memorial service at a San Bernardino sports stadium on Thursday night, residents of all faiths and backgrounds gathered, candles in hand, to weep and to comfort one another. San Bernardino, a relatively poor city whose government has long struggled to stay afloat financially, became the latest U.S. municipality to vow resilience.

"Though we are a bankrupt city, and now a terrorized city, we will not be beaten," City Attorney Gary Saenz said. 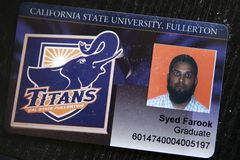 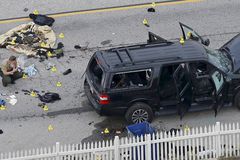