Two uncomfortable lessons could be drawn from the latest Taliban jailbreak in Kandahar: Either the locals were scared to talk about it, or they supported the insurgent plot. Neither option reflects well on NATO strategy in Afghanistan.

How could a team of insurgents camp out in southern Afghanistan's most heavily guarded city, spend months tunnelling and hauling away tons of earth, and attract no notice? Canada spent millions of dollars upgrading the prison and training its staff; Canadian intelligence agents and commandoes are stationed only three kilometres away, at a camp shared with their U.S. and British counterparts. Why didn't anybody tip them off?

The easiest answer is that locals feel intimidated. Taliban assassins have been gunning down their opponents with a record-breaking number of targeted killings in the past year. Nobody knows that better than prominent targets such as Ustad Abdul Halim, a chain-smoking tribal strongman who has bitterly opposed the Taliban and previously served as the governor's security adviser. He lives in a neighbourhood adjacent to Sarpoza prison, and claims that local residents quietly disagree with the insurgents but feel cowed into silence.

"If anybody complains, they get killed," Mr. Halim said by telephone.

The same argument has been repeated countless times in the Afghan war, often in support of sending more troops. The North Atlantic Treaty Organization's strategy holds that local people will only trust the foreign soldiers if they establish a heavy presence and lavish money on development projects. This approach is part of a counterinsurgency theory, or COIN, and often includes the mantra, "clear, hold, build." That theory has been devilishly hard to implement, in places too dangerous to hold permanently.

The neighbourhood around the old jail, however, serves as a revealing test case for the doctrine.

Canadian troops and their allies have worked hard to protect Kandahar city's western approaches, and allotted at least $4-million to fixing up the prison. While not perfectly secure, the neighbourhood around Sarpoza was safe enough for reporters to visit without military escort in recent years.

But the efforts apparently didn't inspire enough confidence when Taliban spread word about an impending attack in June, 2008. People who heard about the plans said nothing to authorities. The prison staff, who were seeing disturbing signs within Sarpoza, didn't share the information with their Canadian mentors. The result was one of the largest jailbreaks in history, with at least 800 inmates running over the rubble of the prison walls.

The Canadians did not respond by rethinking the COIN theory; instead, they redoubled their efforts. Canadian engineers oversaw renovations that included stronger walls and guard towers. Canadian mentors carried in boxes of cash that tripled the meagre salaries of the front-line prison staff. Canadian money even paid for fixing up the neighbourhood, with $122,000 spent on the nearby shops and houses damaged in the jailbreak.

American troops surged into Kandahar in recent years, too, making the city better-guarded than at any point in the past decade.

The extra effort apparently did not win enough hearts and minds, inside or outside the jail. A frustrated prison official, reached by telephone on Monday night, confirmed that inmates had smuggled cellphones into their cells, allowing them to co-ordinate with their rescuers. "I can tell you without help of guards and prominent people, the escape would have been impossible," he told The Globe and Mail.

Others in the neighbourhood also disagree with the idea that locals were terrified by the jailbreakers.

"There must have been thousands of truckloads of earth coming out of that hole, and nobody said anything," said Mohammed Sharif, who lives across the street from the prison. "It's because they are pro-Taliban."

For COIN advocates, that is the most frightening possibility: that Afghans will reject foreigners' efforts, no matter how many troops and dollars are involved.

"It's simple," said Haji Mohammed Qassam, a tribal elder and former member of provincial council. "People don't like the government."

A day after inmates started climbing into the narrow passage that led to freedom, the many details of the Taliban jailbreak are in conflict. Just how long was the tunnel? How many inmates actually escaped? Hoping for specifics, local journalists were ushered into the high-security wing on the northeast side of Sarpoza prison on Monday and shown a ragged hole in the cement floor of a prison cell, about one metre in diameter. Kandahar's Governor said that 475 suspected insurgents, and one criminal convict, went through the tunnel. A small number of Taliban, his government claims, were recaptured and identified using biometric data. The Taliban claimed a total of 541 insurgents escaped, including 106 minor commanders, and did not mention any captures.

A spokesman for the insurgents said a team of diggers, using professional equipment, spent five months on the excavation. Ultimately, it took four hours to empty the wing. He estimated the tunnel's length at 360 metres, but the provincial government said it stretched farther. Claiming they were sweeping for bombs, security forces cordoned the area on Monday, which prevented local journalists from finding the house that was the temporary headquarters for the excavators. The governor said the tunnel ended northeast of the prison in the Sarfooza neighbourhood; others said it went south, under a busy highway, into a poor area known as Zor Shar. 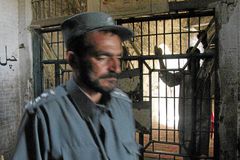 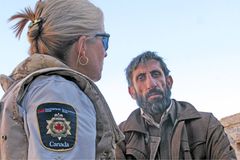 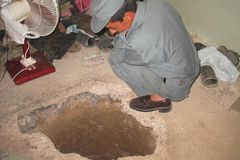