Kaitlyn Lowder is talking about fish so stressed by climate change and acidifying oceans that they commit incest and have anxiety attacks.

"Clownfish are having such a hard time that they sometimes can't identify fish that aren't related to them," says the 23-year-old graduate student at the Scripps Institution of Oceanography at the University of California, San Diego. "So they sometimes mate with their parents. And one of my friends is looking at anxiety in fish, how acidic waters is affecting neuroreceptors in their brains."

Ms. Lowder and her colleague, Shayla Ragimov, 26, a former professional dancer who is a recent graduate of UC San Diego's School of Global Policy and Strategy, are on the morning shift at the two-seat Oceans of Opportunities booth in the vast observer hall at the Paris climate-change conference.

In other equally vast halls, delegates from 195 countries are trying to hammer out a global accord to send greenhouse-gas emissions on a downward trajectory in an effort stop global warming from frying the planet. Their deadline is Friday.

But here, in the observer hall, the job of Ms. Lowder and Ms. Ragimov is simply to raise attention to the plight of the oceans as they absorb atmospheric carbon dioxide, turning them ever more acidic to the point of damaging some species. "The shells of crustaceans, like mussels and oysters, are becoming thinner," Ms. Lowder says.

The observer hall is stuffed with booths from charities, non-governmental organizations, environmental groups (including the one that hands out the Fossil of the Day award), schools, research groups and various associations. There are hundreds of them and none has any direct role in the negotiations. But collectively, they no doubt exert some pressure on the negotiators by raising public awareness of the health of the planet, or lack thereof, as carbon dioxide emissions rise relentlessly.

At each of the booths, job No. 1 is fighting for the attention of international delegates, journalists and the odd climate-change celebrity, such as former U.S. vice-president Al Gore, who was spotted nearby on Tuesday. Ms. Ragimov thinks she has found the secret. "The number of visitors depends on how many shiny pens we put out to give away," she says.

At the booth directly across from the ocean ladies, Tom Boyle, 27, a Briton who is an intern at Nature Code, a sustainable-development group that examines carbon markets, thinks he has found an even better idea than free pens to attract attention: Turn carbon trading into a video game.

The game is called Capman (as in capping carbon emissions), in which a Pac-Man-style yellow figure tries to gobble up threats to a climate deal, including "loathsome lobbyists." Mr. Boyle says as many as 80 visitors a day have played the game. "We're doing 18-hour days here, though people sometimes come here just for the free stuff," he says.

A visitor to the observer hall would be forgiven for thinking at first that many of the booths have little or nothing do with climate change. But closer examination reveals that many do.

Take the Buddhist Tzu Chi Foundation, a charity that claims to have 10 million members worldwide and was founded by Dharma Master Cheng Yen, a Buddhist monk from Taiwan. At the Tzu Chi booth, Lori Chen is talking to guests from a clever folding bed, made from lightweight polypropylene, that, with a few easy movements, can be converted into a table or a chair. The bed was designed to cope with the massive floods, possibly the result of climate change. "Our founder saw little kids sleeping on the ground in Pakistan after a flood and she was heartbroken," Ms. Chen says. "So she decided to build a portable bed."

The most eye-catching booth belongs to Earth Savers, a Philippine charity that uses art – painting, theatre, poetry – to promote environmental awareness. "The problem is that everyone speaks science here," said Cecile Alvarez, 72, the charity's front woman in Paris. "We're trying to reach the masses through cultural symbols."

Ms. Alvarez stuffed her suitcases with 17 paintings made by handicapped Filipinos, each of which was inspired by one of the United Nations' sustainable development goals, such as ending hunger and inequality, and put them on display in Paris. The paintings are colourful and optimistic and come with little poems, one of which reads, "The planet can't survive on greed/ The Earth has given us all we need."

Ms. Alvarez's booth has been a hit. So too, apparently, have the paintings themselves. "We lost two of them – they disappeared," she says. "Maybe someone thought they were free."

Degrees of separation: Why global temperatures matter to millions
December 8, 2015 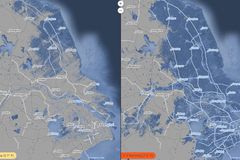 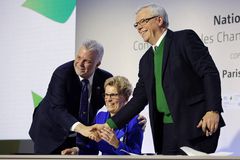