Minnesota Sen. Al Franken faces a storm of criticism and a likely ethics investigation after a Los Angeles radio anchor accused him Thursday of forcibly kissing her and groping her during a 2006 USO tour. He is the first member of Congress caught up in the recent wave of allegations of sexual abuse and inappropriate behaviour.

Franken apologized, but the criticism only grew through the day. Fellow Democrats swiftly condemned his actions, mindful of the current climate as well as the prospect of political blowback.

Republicans, still forced to answer for the multiple allegations facing Alabama Senate candidate Roy Moore, joined in pressing for an investigation. Franken said he would welcome it.

Leeann Tweeden posted her allegations, including a photo of Franken and her, on the website of KABC, where she works as a news anchor for a morning radio show. The photo shows Franken posing in a joking manner, smiling at the camera with his hands on her chest as she naps wearing a flak vest aboard a military plane. Both had been performing for military personnel in Afghanistan two years before the one-time "Saturday Night Live" comedian was elected to the Senate.

Tweeden said Thursday that before an earlier show Franken had persisted in rehearsing a kiss and "aggressively stuck his tongue in my mouth." Now, she said, "every time I hear his voice or see his face, I am angry." She's angry with herself, too, she said, for not speaking out at the time "but I didn't want to rock the boat."

Franken, 66, is the latest public figure to be caught in the deluge of revelations of sexual harassment and misconduct that have crushed careers, ruined reputations and prompted criminal investigations in Hollywood, business and beyond. The swift rebukes from both Republican and Democratic lawmakers suggest that momentum from the online #Metoo movement has begun to spur a culture shift on Capitol Hill, where current and former staffers say misogynistic and predatory behaviour has long been an open secret.

In a statement Thursday, Franken apologized to Tweeden and his constituents while maintaining that he remembered the rehearsal differently. Tweeden said she accepted his apology.

"Coming from the world of comedy, I've told and written a lot of jokes that I once thought were funny but later came to realize were just plain offensive," Franken wrote.

"I respect women. I don't respect men who don't," Franken added. "And the fact that my own actions have given people a good reason to doubt that makes me feel ashamed."

Of the photo, Franken said: "I look at it now, and I feel disgusted with myself. It isn't funny. It's completely inappropriate. It's obvious how Leeann would feel violated by that picture."

President Donald Trump ridiculed Franken in tweets Thursday night: "The Al Frankenstien picture is really bad, speaks a thousand words. Where do his hands go in pictures 2, 3, 4, 5 & 6 while she sleeps? ..... And to think that just last week he was lecturing anyone who would listen about sexual harassment and respect for women. Lesley Stahl tape?"

Trump, who misspelled the name Frankenstein, referred to a New York magazine story from 1995 in which Franken, while a writer for "Saturday Night Live," suggested a skit in which "60 Minutes" commentator Andy Rooney would muse about drugging correspondent Leslie Stahl and taking pictures of her.

Trump has been publicly silent about the allegations against Moore, the Republican nominee in Alabama's special Senate election. Through a spokeswoman, he called the allegations of sexual misconduct against the former judge "very troubling" but stopped short of calling on Moore to drop out.

The accusations against Franken come just days after the Senate unanimously adopted mandatory sexual harassment training for members and staffs amid a flood of stories about harassment, sexual misconduct and gender hostility from staffers, aides and even female elected officials.

On Tuesday, Rep. Jackie Speier, D-Calif., testified in the House that two current lawmakers, one Republican and one Democrat, were known to have engaged in sexual harassment.

Speier did not name the lawmakers – at the request of the victims, she said, and because of a non-disclosure agreement. Speier has become a voice for sexual harassment awareness after coming forward with her own story of being assaulted by a chief of staff when she was a congressional aide.

Tweeden on Thursday said Speier inspired her to share her story.

Senate Democrats spoke with one voice in describing Franken's actions as unacceptable and calling for an ethics probe.

Franken's fellow Minnesota Democrat, Amy Klobuchar, said, "This should not have happened to Leeann Tweeden. I strongly condemn this behaviour, and the Senate Ethics Committee must open an investigation."

Sen. Claire McCaskill of Missouri, who is facing a tough re-election next year, said she was "shocked and concerned." She said, "Comedy is no excuse for inappropriate conduct, and I believe there should be an ethics investigation."

Indeed, Franken himself said he welcomed the investigation.

Tweeden said Franken wrote a skit for the pair that was filled with "sexual innuendo," and had brought a woman's thong as a prop that he waved around during their performance. Part of the skit included a kiss, she said, and he insisted they practice during a rehearsal despite her protests.

"We did the line leading up to the kiss and then he came at me, put his hand on the back of my head, mashed his lips against mine and aggressively stuck his tongue in my mouth," she wrote.

The photo that she posted was taken on the trip home from Afghanistan. Franken is shown grinning and staring at the camera while reaching out over her chest as she naps. Tweeden said she didn't discover the photo until she returned home.

The USO said there was no claim of sexual harassment reported to the organization in 2006.

The USO, or United Service Organization, has long organized entertainment tours to serve military members overseas. Before he was elected a senator from Minnesota, Franken participated in four tours to four countries from 2003 to 2006.

The USO called the allegation against Franken "deeply disturbing."

Franken is a longtime comedian and "Saturday Night Live" writer who won a Minnesota seat in the Senate after a lengthy recount in 2009.

Franken, who has been married for more than 40 years, drew criticism during his first Senate campaign for joking about rape while discussing a sketch idea during his days at NBC-TV. Franken said then that he regretted some of the things he had written, and said he respected women "in both my personal and professional life." 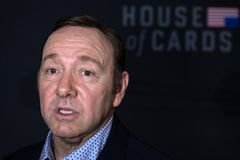 Trump mum as Republicans intensify call for Roy Moore to drop out of Senate race
November 15, 2017 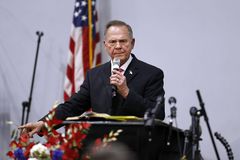 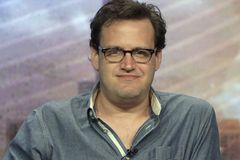