The senior American special forces officer who directed the assault on the Afghan compound where Omar Khadr was captured in July 2002 said he was only trying to get the facts straight when -- years later -- he changed the after-action report in his laptop.

Known only as Lt-Col. W. because the rules of the military tribunals on the U.S. naval base in Cuba ban further identification, the official testified via video link today.

The original after-action report, written in the early-morning hours of July 28, 2002 after Col. W. (then a special forces major) returned to the Chapman forward operating base in eastern Afghanistan. It said the grenade thrower who killed Sgt. Christopher Speers was in turn killed by a special forces soldier who shot him twice.

But Mr. Khadr, although gravely wounded and initially presumed dead, survived and, now 23, is on trial for murder because the U.S. government contends he was an unlawful combatant and doesn't have the protection of international law which permits soldiers to kill and maim.

No other Taliban or al-Qaeda fighter captured in Afghanistan in the nearly eight years since Mr. Khadr was taken prisoner has been charged with murder. Nearly 1,800 U.S. and allied soldiers - have been killed on Afghan battlefields since 2001.

Years later, Col. W. said today he couldn't remember exactly when but after prosecutors came to visit him, he checked his copy of the document on his laptop and realized that Omar Khadr - now facing trial for murder and terrorism charges - had survived.

"The copy that was changed, was for me, for historical purposes," Col W. said today under cross-examination by defence attorney Barry Colburn.

Two years ago, when the doctored versions first surfaced, Mr. Khadr's defence lawyer U.S. Navy Cdmr. William Kuebler, claimed the change was a deliberate attempt to implicate Mr. Khadr who was the only survivor among al-Qaeda fighters to survive the July 2002 firefight.

The "government manufactured evidence to make it look like Omar was guilty," said Cdmr. Kuebler, who is no longer on the defence team.

Today, Lt.-Col W. explained that when he wrote the report he was convinced, as was a military doctor who examined the then 15-year-old Mr. Khadr who had been shot twice at close range and suffered a head wound in prior air strikes, was certain to die.

"This is the guy who threw the grenade," Lt.-Col. W. said a young solider who was standing over the critically-wounded teenager. Other after-action reports, including one written by the special forces soldier who said he shot both Mr. Khadr -- twice in the back -- and another al-Qaeda operative who was found dead a few feet from the teenager, also believed it was the boy who threw the grenade.

Lt.-Col. W's account today provided an alternative explanation -- that he was only fixing his personal copy for historical accuracy -- but it left unanswered several questions. Among them, why a still-serving officer apparently has highly-classified after-action report of assaults on a suspected al-Qeada hideout on his personal laptop?

Lt.-Col. W. also knew, within days of the original firefight that Mr. Khadr had survived, that the military medevac flight to a hospital at Bagram where emergency operations saved his lift.

However, it is not clear whether he made any effort to correct his after-action reports once he first realized that Mr. Khadr had survived. 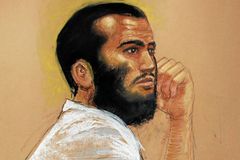