Seven years ago, a group of Hollywood activists celebrated their greatest triumph when an international court issued an order to arrest Sudanese President Omar al-Bashir for war crimes in Darfur.

The arrest warrant on March 4, 2009, was hailed as a huge victory over the impunity of world leaders: the first time a sitting head of state had been charged with crimes against humanity. It was the climax of a long campaign by film star George Clooney and other Hollywood celebrities to turn Darfur into a global cause.

But Friday, on the seventh anniversary of the arrest warrant, Mr. al-Bashir remains firmly in power and the bloodshed continues. Sudanese tanks and warplanes continue to kill villagers in Darfur. An estimated two million refugees are still homeless. Peacekeeping troops are abandoning Darfur, under pressure from Khartoum. And governments are increasingly ignoring the arrest warrant, giving Mr. al-Bashir more freedom than at any time since the warrant was issued.

Activists call it "Darfur fatigue" and they admit it is hampering their work. Darfur has disappeared from the world spotlight, making it easier for Mr. al-Bashir to claim that "peace and security" have returned to Darfur, despite the aerial bombing and artillery shelling by Sudanese military forces.

On the anniversary of the arrest warrant, protesters will gather near the United Nations headquarters in New York on Friday to demand action. They say the Darfur crisis is growing steadily worse as it fades from the world's attention.

South Africa announced last week that it would withdraw all of its 800 troops from the international peacekeeping force in Darfur next month. It gave no clear reasons, but it seemed to be another sign of implicit support for Mr. al-Bashir, who was allowed to travel freely to a summit in Johannesburg last year, when South Africa decided to ignore the arrest warrant.

South Africa is a member of the International Criminal Court, which issued the arrest warrant against Mr. al-Bashir in 2009 and later expanded the warrant to include charges of genocide. But many African governments are increasingly hostile to the international court and Mr. al-Bashir has been able to exploit that hostility for his own benefit.

Serbia, another member of the international court, awarded a national medal to Mr. al-Bashir last month. China, which is not a member of the court, invited Mr. al-Bashir on a four-day visit to Beijing last year and praised him as "an old friend of the Chinese people."

International sanctions have been "too patchy and partial" to bring results against Mr. al-Bashir, according to a commentary last month by Eric Reeves, an academic expert on Sudan. "It seems unlikely the court's arrest warrant will ever be served," he said.

In an interview with The Globe and Mail in 2011 in southern Sudan, Mr. Clooney was supremely confident that the Darfur activists could anticipate Mr. al-Bashir's every move. He used basketball metaphors to explain their strategy. "We're watching tape on the basketball game and we know that he doesn't pick and roll," he said. "He's very predictable. We know all the moves."

But in recent years, it is Mr. al-Bashir who seems to have outfoxed the activists. Mr. al-Bashir's strategy now is to demand an "exit strategy" by the remainder of the 17,000 peacekeepers, forcing them to withdraw from Darfur, which in turn would allow Sudanese forces to intensify their assault without foreign witnesses.

The peacekeepers, a hybrid force of UN and African Union troops, have felt growing pressure from the Sudanese government, which has restricted their movements, limited their weapons supplies, delayed the approval of replacement troops during rotations and even restricted the supply of medicine for the troops. As a result, the peacekeepers have been outgunned and unable to protect themselves or the civilians. In one incident, Sudanese troops reportedly encircled South African peacekeepers to use them as hostages when a court action was threatening to prevent Mr. al-Bashir from leaving South Africa.

Stéphane Dujarric, a spokesman for UN Secretary-General Ban Ki-moon, said he was "sorry" to see the South African peacekeepers pulling out of Darfur.

"The environment in which the peacekeepers in Darfur operate is pretty clear for everyone to see. It's a very challenging environment. We've had repeated issues with freedom of movement, freedom of access for the peacekeeping troops," he told the South African Broadcasting Corp. last month.

The Sudanese government said it welcomed the withdrawal of the South African troops. Khartoum seems determined to declare an end to the Darfur crisis, so that it can dismantle the refugee camps and redeploy its military against other domestic opponents.

To this end, it launched a military campaign in Darfur in mid-January, using armoured vehicles, warplanes and artillery. The offensive has forced more than 87,000 people to flee their homes, according to UN estimates. 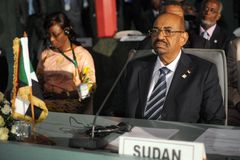 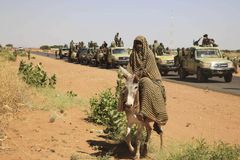 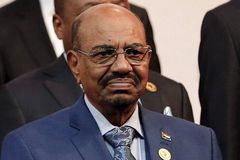