Reza Pahlavi's life has been consumed by a single mission: ousting the Islamic regime that overthrew his father in Iran's 1979 revolution and installed a theocracy. He was just 17 at the time, training to become a fighter pilot at a U.S. Air Force base in Texas. Since then, he has worked from exile in the West to agitate for secular democracy in Iran, a country he would have ruled by simple birthright as the eldest son of the Shah.

He says he has no desire to revive his claim to the Peacock Throne. Instead, Mr. Pahlavi hopes to dislodge Iran's clerical regime by raising up to $1-billion from individuals and private companies outside of Iran that are sympathetic to his cause. He wants to funnel that money to anti-government activists inside Iran, to fund actions such as labour strikes and other forms of civil disobedience that he hopes will destabilize and eventually end the regime.

Access to money, he believes, is one of the major obstacles to a people's revolution.

Last weekend in Toronto, Mr. Pahlavi convened the first general meeting of the Iranian National Council, a loosely based umbrella group of opposition figures from Iran and the diaspora that was created in Paris last year. Its stated goal is to nurture pro-democracy forces inside Iran – doling out funds, technology and advice to opponents of the regime and fomenting dissent within the country. It says it represents "the broadest array of individuals and nascent political organizations" spanning the ideological spectrum, including monarchists, republicans, religious and ethnic minorities.

Mr. Pahlavi, 54, no longer presents himself as the legitimate ruler of Iran. He says he is a staunch democrat as well as a practising Shia Muslim. But he is a divisive figure for Iranians. Some critics oppose him because they hated his father's autocratic rule.

"It remains unclear whether he can actually deliver what he's promised," said Saeed Rahnema, a professor of political science at York University who has written extensively on the Iranian diaspora and opposition movement. "The opposition is still highly diversified. None of these groups are collaborating with each other. Mr. Pahlavi may hope that his council will become an alternative to the regime, but nobody in the opposition – including him – is in that position yet."

On a practical level, it's also unclear whether Mr. Pahlavi's strategy would ever work in Iran, where labour unions are non-existent and virtually any form of dissent carries the real risk of prison or execution. Sowing internal pressure could also undermine international negotiations to rein in Iran's nuclear program. Transferring money into the country is problematic and potentially illegal due to international sanctions – something Mr. Pahlavi readily acknowledges.

Still, in Canada, Mr. Pahlavi's message resonates. Last Saturday, several hundred of people of Iranian descent – many who left during or after the revolution – gathered in a Toronto hotel to hear his appeal for support. "The Iranian people have not been considered what they are: the ultimate weapon," Mr. Pahlavi said. "We already have the ultimate army in place."

Hamid Ghahremani, a 57-year-old businessman in Caledon East who left Iran in 1982, was convinced. "He is our leader," he said, standing on the sidelines of the event collecting envelopes of cash and cheques from several people in the audience. Mr. Ghahremani said the Iranian diaspora in Canada numbers roughly 120,000 and is relatively wealthy, and that despite the smallish crowd at the Toronto meeting, many in its ranks are eager to financially back Mr. Pahlavi's cause.

Canada, which broke off diplomatic relations with Iran in 2012, would be a natural ally because of its large Iranian diaspora community and the government's fiercely anti-Iranian policy. "Canada is one of the outspoken voices. [It's] a very natural candidate to be one of the leading countries in assisting those of us fighting for democracy and human rights," said Mr. Pahlavi.

But the Iranian National Council is not asking governments, like that of Canada, to finance it, according to Mr. Pahlavi. It does seek money and what he called "technology" from individuals and corporations for its work inside Iran. "Certain companies have been willing to do that," he said, declining to specify which ones. He says he is not working directly with Canadian government, but characterized Ottawa's stance against the Iran's clerical regime as "very heartening." Nazanin Afshin-Jam, an Iranian-Canadian human-rights activist who is the wife of Justice Minister Peter Mackay, sent a video greeting to the council's meeting.

While other Western powers have expressed cautious hope that Iran's new president, Hassan Rouhani, represents a moderating force within the regime, Ottawa has maintained its hardline stance against Iran. Mr. Pahlavi argues Mr. Rouhani's authority is as illegitimate as that of former president Mahmoud Ahmadinejad because only candidates hand-picked by the regime are allowed to run in Iranian elections. Mr. Rouhani's election, he says, "is pretty much the equivalent of electing Caesar at the height of the Roman Empire."

In addition to severing diplomatic ties and imposing sanctions, Ottawa has declared Iran a state sponsor of terrorism. Foreign Affairs Minister John Baird has characterized Iran as the "biggest threat to global peace," saying it "oppresses with terror at home and sponsors it abroad." The government is also wary of negotiations around Iran's nuclear programme, a view shared by Mr. Pahlavi. The current regime cannot be trusted, he asserts. "The bottom line is you have a rogue state. You have a rogue system. And that rogue system cannot come to terms with the free world as we know it."

Mr. Pahlavi believes Western governments should redirect their efforts away from negotiating and toward nurturing links with the opposition, inside and outside of Iran. The Harper government is already pursuing this strategy. It recently launched an effort to reach Iranians through the Internet and social media, and last year sponsored an online dialogue with dissidents and activists in Iran that bypassed Iranian Internet restrictions.

Mr. Pahlavi views such efforts as key to laying the groundwork for possible regime change. The mass demonstrations after the 2009 Iranian presidential elections, where protesters demanded the removal of Mr. Ahmadinejad from office, ultimately fizzled because the international community failed to support them, he says. "How many times do you expect defenceless people under brutal regimes to rise and take their chances, only to be abandoned in midair?" 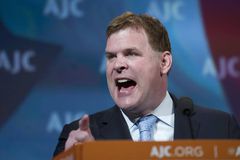