After an Easter weekend in which the Vatican responded defiantly to a child sex-abuse scandal with silence from Pope Benedict XVI and bitter accusations from his senior clerics, the Roman Catholic Church finds itself embroiled in conflicts with two other major religions and calls for a wider apology.

The Pope's Easter Sunday mass in St. Peter's Square surprised many observers with his silence on allegations that he helped protect priests who had raped children in half a dozen countries . Even more surprising was an unprecedented introductory sermon yesterday by Angelo Sodano, the dean of the Vatican's College of Cardinals, in which he denounced widespread charges of child sex abuse by priests as "idle chatter."

Speaking to tens of thousands of faithful in St. Peter's Square, Rev. Sodano described the sex-abuse scandal, which has led to the resignation of a bishop and an apology by the Pope to Irish Catholics, as " chiacchiericcio," an Italian word usually reserved for the idle gossip of housewives.

"Holy Father, the people of God are with you and will not let themselves be impressed by the petty gossip of the moment, by the trials that sometimes assail the community of believers," Father Sodano said in a novel introduction to the Pope's Easter Sunday sermon, which avoided mention of the controversy.

That sermon followed one on Friday, by the Pope's private preacher, that had likened the position of the Roman Catholic leadership during this scandal to that of Jews in the Holocaust.

Reports have emerged in recent weeks of hundreds of cases of sex abuse of children by priests, and a Catholic leadership, that had repeatedly protected the priests from prosecution and kept them in positions where they could work with children.

The Vatican's defiance stood in stark contrast to other branches of the church, which used the holy weekend to respond with messages of mortification and shame.

"The lives of survivors of child sexual abuse, the faith of members of the church and the credibility of church leadership have all been wounded grievously by the evil deeds of priests and religious [leaders]who exploited their position to wreak havoc on the lives of helpless children," said Sean Brady, the Irish Catholic primate, who faces calls for his own resignation after it emerged that he had concealed knowledge of a pedophile priest in the 1970s.

At the same time, Jewish and Anglican leaders sparred openly with Rome over its defensive and sometimes hostile response to allegations that the Pope, in his years as a top bishop in Germany, may have helped priests in Germany, Ireland, the United States and elsewhere evade punishment for sexual abuse.

Archbishop of Canterbury Rowan Williams, head of the Church of England, mentioned that the Catholic Church in Ireland was "suddenly losing all credibility" over a claim that the Irish church had covered up the sexual abuse of hundreds of boys by a number of priests.

Those remarks, mild compared to those spoken in self-exculpatory sermons this weekend by the Catholic bishops of Belgium and Germany, nevertheless drew an embittered response from the Irish Catholic leadership. Archbishop Williams apologized last night for his words.

The Irish bishop held responsible for covering up of the abuse claims, John Magee, resigned last month, and the Pope apologized in a letter to Irish Catholics last week for the abuse itself, though not the concealment. That has been his only comment on the scandal, other than to liken himself to Jesus in a speech last week that also likened the accusations to petty gossip.

Several Jewish leaders also expressed outrage this weekend at a Good Friday sermon in which the Pope's personal preacher, the Rev. Raniero Cantalamessa, likened the widespread public response to the child-abuse cover-up to the "collective violence suffered by Jews," and the criticisms of the church leadership over the scandal to anti-Semitism.

That was followed Sunday by a halfhearted apology from Father Cantalamessa in Italy's Corriere della Sera newspaper in which he said he had been using Jews as an example of "the use of stereotype and the easy passage from individual to collective guilt."

"If - and it was not my intention to do so - I hurt the sensitivities of Jews and victims of pedophilia, I am truly sorry and I ask for forgiveness," Father Cantalamessa told the newspaper.

The Pope, then known as Cardinal Ratzinger, was head of the Congregation for the Doctrine of the Faith, the Vatican's main body responsible for dealing with abusive or miscreant priests, between 1981 and 2005.

During that time, reports have shown that his office was aware of a number of cases of sexual-predator priests who had serially raped and abused children in several countries, but that he had them reassigned to other congregations or sent to therapy sessions, not prosecuted or defrocked. It does not appear that parishioners were ever warned of their priests' offences.

The church's sex-abuse scandal, which has embroiled hundreds of priests in dozens of countries over the past decade, expanded this weekend to Malta, where reports this weekend said that 45 priests have been accused of sexual abuse in the past 10 years, but that authorities had not sought prosecution for any of them. 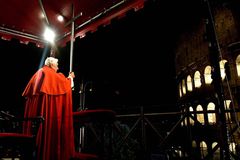