Li Aijie stood alone in the courthouse, weeping as she scanned the verdict, looking for the single number that would determine her husband's fate.

Then she found it: 19. He had been sentenced to nearly two decades behind bars on state-subversion charges with a sentence that makes him one of the most striking examples of China's recent unwillingness to brook dissent.

Zhang Haitao, her husband, shares little in common with the high-profile figures arrested in a Chinese crackdown on dissent under President Xi Jinping. Mr. Zhang is not a lawyer or an activist. He sold SIM cards and broadband Internet.

But he also fell in love with the writings of Myanmarese democracy icon Aung San Suu Kyi and the idea of universal values – and grew deeply disenchanted with the Communist regime that rules his country. He began to discuss those ideas with Chinese-language media overseas and wrote several articles for a news site popular with dissidents.

His sentence is far longer even than the jail term given to Nobel Peace Prize winner Liu Xiaobo and comes amid a renewed bid by Chinese authorities to extend heavy-handed media controls outside the country's borders. One element of that campaign involves adding pressure to dissidents writing for foreign media sites critical of the Chinese administration.

Ms. Li recalls the moment when she saw her husband's sentence.

"My brain went completely blank. I threw the verdict down on a table in the court office," she said. "On what basis have you sentenced my husband to jail for so many years?" she raged at court staff. "Just because he wrote a few sentences online!"

In the past month, dozens of people have vanished amid a bid to uncover the author of a letter that called for the resignation of Mr. Xi; many of them are related to dissidents who write for overseas media. The anonymous letter was initially posted on one such site.

The letter investigation forms part of a broader media turmoil that recently prompted Yu Shaolei, culture editor at Southern Metropolis Daily, to resign, with a note posted to social media saying: "I'm getting old; after bowing for so long, I can't stand it any more."

That letter, deleted hours after it was posted online, criticizes the President for fostering a cult of personality in contradiction of party rules, developing a "personal dictatorship" and tarnishing the Communist Party image through indiscretions that include alleged extramarital affairs.

All references to the critical letters have been expunged on the Internet in China, even as the country takes new steps to shape international opinion through its own news coverage. On Tuesday, the South China Morning Post made all of its online content free, after Chinese e-commerce giant Alibaba finalized its purchase of the newspaper. On Wednesday, a new state-funded English-language online news site called Sixth Tone began publishing with promises of a more engaging take on the country's current events.

Mr. Xi has spoken about "controlling international public opinion about China, and making the party's voice dominant," said David Bandurski, a Chinese media expert at the University of Hong Kong.

Mr. Zhang had written columns for Boxun, one of the most popular overseas Chinese dissident news sites, and tweeted critical comments. In one, he appears to compare the Communist Party to a cult that beat a woman to death in 2014.

Mr. Zhang's supporters believe he faced more severe treatment because he lives in Xinjiang, home to the largely Muslim Uyghur minority, whose people Chinese officials have blamed for a series of terrorist attacks.

What happens "in a marginal, kind of restive frontier region is viewed as far more serious by the authorities," said James Leibold, a specialist in Chinese ethnic politics at La Trobe University in Melbourne, Australia.

Xinjiang, too, is central to Mr. Xi's ambitions to extend Chinese influence throughout Central Asia, which has lowered the tolerance for dissent.

Still, Mr. Zhang demonstrates the lengths some Chinese authorities are going to snuff out dissent.

He met his wife, Ms. Li, in Henan, the couple's home province, in a place where singles wrote their details on paper that they posted in a local park. Mr. Zhang said he was 1.68 metres tall. Everyone else rounded up. "I felt he was honest," Ms. Li said.

Her other dates "would talk about how many apartments they owned, how much money they had or how fancy a restaurant they wanted to go. I found them boring and meaningless," she said.

"He told me about [artist and activist] Ai Weiwei and universal values. I had never heard about any of it, but he changed my mind in a big way," Ms. Li said in an interview with The Globe and Mail. "He wanted democracy. He said, 'With one party ruling the country, we will see disasters everywhere.'"

Mr. Zhang occasionally shared his views with Radio Free Asia and Voice of America, both funded by the U.S. government.

That particularly angered local authorities. In the verdict against him, the Intermediate People's Court in Urumqi accused him of "colluding" with a "hostile overseas organization" in order to "attack and distort our national policies and management." The court said he spread photos of police cars used in "stability maintenance" and criticized Marxism-Leninism as "extreme ideology."

In January, it sentenced him for "providing intelligence overseas," in addition to "incitement to subvert state power."

China may guarantee its people freedom of speech, the court said. But its citizens are also obliged "to safeguard national unity."

The court froze the couple's money and Ms. Li has struggled to raise a son born after her husband was arrested last June.

They haven't yet given their baby a formal name. But they have a nickname. They call him "Little Mandela." 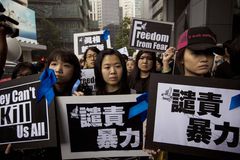 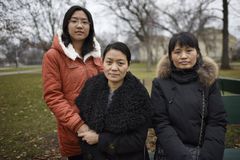