For years, whenever SNC-Lavalin Group Inc. had eyes on a major contract in Libya, it could count on one key executive to make it happen – Riadh Ben Aissa.

Mr. Ben Aissa played an invaluable role at the Montreal-based engineering firm, helping generate roughly $1-billion worth of work for SNC in Libya. He did it with an aggressive management style and a remarkably close relationship with Colonel Moammar Gadhafi's son Saadi. The two were so close that whenever Saadi needed cash for cars, trips or property, he sent a message to Mr. Ben Aissa and the money arrived. And when Saadi came to Toronto in 2008 to check out the film festival, take courses in English and engineering and party with rapper 50 Cent, SNC picked up part of the tab.

"When [Saadi]needed money, [Mr. Ben Aissa]was the one I spoke to," said Gary Peters, a Canadian security consultant who worked as a bodyguard for Saadi. Some of the payments went as high as $100,000, he added.

Mr. Ben Aissa's closeness to Saadi now appears to be working against him. SNC announced late Thursday that he was no longer employed by the firm. Another executive, Stephane Roy, also lost his job. The company declined comment other than to say in a press release that "questions regarding the conduct of SNC-Lavalin employees have recently been the focus of public attention. SNC-Lavalin reiterates that all employees must comply with our code of ethics and business conduct."

Mr. Ben Aissa is fighting back. He announced Friday that he plans to sue SNC over the dismissal and allege he has been libelled. In a press release, he added that he did not violate any company policies and had already resigned from SNC, although he did not say why.

The dismissal and potential lawsuit marks a bitter end to Mr. Ben Aissa's 27 years at SNC, where he won high praise and steady promotion largely for his work in Libya.

Documents obtained in Libya by The Globe and Mail indicate that Mr. Ben Aissa was born in Tunisia in 1958. He made his way to Canada to study at the University of Ottawa, graduating in 1985 with a master's degree in business administration. He joined SNC after graduation, working in strategic planning and development. He rose through the ranks quickly, eventually becoming senior vice-president of SNC-Lavalin International, which put him in charge of the company's operations in North Africa, including Libya.

It was an opportune time. By the late 1990s, Col. Gadhafi had renounced terrorism and rehabilitated Libya in the eyes of Western leaders. Sanctions fell and companies from around the world rushed to the desert dictatorship to get a piece of the action. Mr. Ben Aissa came too.

Within a few years, SNC started winning big contracts. They included $425-million for work on a massive water-diversion project, plus contracts to build a $500-million airport in Benghazi, a prison in Tripoli, as well as countless roads, bridges and housing developments. At one point, Mr. Ben Aissa said he had more than 10,000 people working for him. As a reward for his efforts, SNC made him an executive vice-president in 2007 and named him to the Office of the President, making him one of the company's top five executives. In 2010, he earned $1.74-million in total compensation.

The key to Mr. Ben Aissa's success in Libya was Saadi. The two formed a close bond that generated untold benefits for SNC and Saadi. Mr. Ben Aissa helped create the Libyan Corps of Engineers in 2008, a joint civilian-military venture headed by Saadi. The corps was subordinate to the Libyan military and received funding from the defence budget, although SNC has insisted none of its work involved weapons or combat.

The two men also worked together as chairman and deputy chairman on the Executing Agency, a separate organization that assessed projects for the Corps of Engineers. The relationship was so tight that the Executing Agency's logo incorporated blue for SNC and green for Libya, according to documents.

Board minutes show the men discussed a variety of projects, including a new community called Desert City, with homes for 30,000 people, a golf course and various tourist attractions. Mr. Ben Aissa was so involved with the ventures that he signed off on the hiring of a cook from Thailand.

When Libya fell into turmoil last year and the Gadhafi family was surrounded in Tripoli, Mr. Peters recalled meeting with Mr. Ben Aissa to discuss security issues for SNC employees. The conversation turned to Saadi. "He was concerned about Saadi and his family," Mr. Peters recalled. However, he added that Mr. Ben Aissa was not involved in a plot to help Saadi escape.

Saadi eventually fled to Niger, where he has been granted asylum despite a warrant for his arrest. And SNC's ties to the former dictator's son are no longer helpful. The company has been criticized for the prison project and for paying Canadian consultant Cynthia Vanier to write a sympathetic report of the Gadhafi regime last summer. SNC has also been caught up in a scandal over a bizarre plan to spirit Saadi to Mexico last fall. That resulted in the arrest of Ms. Vanier in Mexico in November on several charges including falsifying passports. She has denied any wrongdoing.

On Friday, the former executive VP said he lamented the way his career has ended at SNC. He added that he was a loyal employee who had "spared no effort to protect the interests of the company, successfully" and always acted "in compliance with [the]company's policies."

In reply, SNC spokeswoman Leslie Quinton was blunt: "We stand by our press release as is." 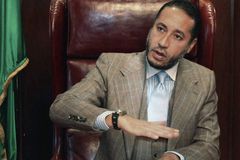 SNC-Lavalin wins $500-million Libya contract
September 15, 2008
Venezuela taps SNC-Lavalin for irrigation project
February 21, 2008
Follow Paul Waldie,  on Twitter @PwaldieGLOBE
Report an error Editorial code of conduct
Due to technical reasons, we have temporarily removed commenting from our articles. We hope to have this fixed soon. Thank you for your patience. If you are looking to give feedback on our new site, please send it along to feedback@globeandmail.com. If you want to write a letter to the editor, please forward to letters@globeandmail.com.
Comments