After months of Donald Trump dominating national polls of Republican voters, there is a new front-runner.

A CBS-New York Times poll released on Tuesday morning puts Ben Carson at the top of a crowded Republican leadership field with 26-per-cent support. Mr. Trump's support is at 22 per cent – within the margin of error of the poll conducted ahead of Wednesday's national leaders' debate on CNBC at 8 p.m. ET.

Like Mr. Trump, Dr. Carson is a former Democrat who has never held public office. Unlike Mr. Trump, he is a renowned surgeon whose soft-spoken manner has endeared him to many voters.

In Iowa – where GOP voters will kick off the primary season in February of 2016 – Dr. Carson has a double-digit lead over Mr. Trump, according to a Monmouth University poll released on Monday.

For curious Canadian observers of a Republican leadership contest that has favoured outsiders and anti-establishment candidates, here are some questions answered about the new front-runner.

How surprising is the latest national poll?

Dr. Carson has consistently stayed at the front of the pack in national polls of Republican voters, and with every televised leadership debate he has enjoyed a postdebate bump among surveyed voters.

Dr. Carson has wooed evangelical voters. In a state like Iowa, they represent a powerful voting bloc – 60 per cent of Iowa's Republican voting base is evangelical Christian.

He has connected with them by showing skepticism toward the public-education system and talking up the value of home schooling – the choice of many conservative evangelical voters when it comes to the education of their children, Prof. Schmidt explained. "He's their man," he said.

That ability to connect with evangelical voters will not help Dr. Carson in New Hampshire, another early primary voting state, where evangelical voters are not a deciding factor. But in many southern states, he can count on support among conservative evangelicals, who hold outsized influence, Prof. Schmidt said.

What put Dr. Carson in the spotlight?

The pediatric surgeon made history in 1987 as part of a Johns Hopkins Hospital team that completed the first successful operation to separate conjoined twins connected at the head.

But his foray into politics took place in 2013, when he spoke at the 61st National Prayer Breakfast and offered a critique of Obamacare and government intrusion into health care – with President Barack Obama sitting nearby.

He extolled the virtues of small government and individual responsibility while lamenting the moral decay of American society and the fiscal irresponsibility of its political leaders.

That speech was widely lauded by conservative pundits and shared among Obama opponents. A conservative star was born. The Wall Street Journal went so far as to publish a headline saying: "Ben Carson for President."

Why does he resonate with Republican voters?

Dr. Carson is the non-politician in an election cycle when career politicians are being routinely spurned. "His personality is this very smart doctor, very quiet. He doesn't insult people, he doesn't yell," Prof. Schmidt said.

That humble persona translates into a reluctance to attack his rivals in debates, in media interviews or on social media – qualities that distinguish him from Mr. Trump.

At the end of the leadership debate in September at the Ronald Reagan Presidential Library in California, Dr. Carson charmed the audience with his closing comments, seeking to differentiate himself from the many career politicians onstage.

"I'm the only one to separate Siamese twins. The only one to operate on babies while they were still in [their] mother's womb. The only one to take out half of a brain, although you would think if you go to Washington that someone had beat me to it," he said to laughter and applause.

What is his personal story?

Dr. Carson grew up in inner-city Detroit, the son of a single mother who supported her family by cleaning homes. The young Benjamin Carson would go on to graduate from Yale University and the University of Michigan medical school and become a renowned neurosurgeon and best-selling author.

In 2008, he was awarded the Presidential Medal of Freedom – the highest U.S. civilian award – by president George W. Bush for his contributions to medicine and philanthropy.

That personal trajectory – being born into a black family, growing up poor and beating the odds – gives Dr. Carson a powerful story that he can draw on during the Republican leadership race.

"His personal story is that American story of can-do and anyone can become president – and that plays really well with a lot of people," Prof. Schmidt said.

Where does he stand on the issues?

Dr. Carson has relished making what he calls politically incorrect comments – a pattern that has been rewarded during the leadership race.

He has described U.S. society as a place where "people are afraid to say what they actually believe" and made comparisons to Nazi Germany. On Mr. Obama's signature health-care law: "You know, Obamacare is really I think the worst thing that has happened in this nation since slavery," he said at a conservative summit in 2013. He has also opposed the idea of a Muslim American ever being president.

Dr. Carson supports a ban on abortion, with no exception for instances of sexual violence leading to pregnancy.

His latest comments make a historical reference to slavery (yet again) when talking about stopping the practice of abortion. "During slavery, a lot of slave owners thought they had the right to do whatever they wanted to that slave – anything that they chose. And what if the abolitionists had said, 'I don't believe in slavery, but you guys do whatever you want'? Where would we be?" he said in a U.S. television interview on Sunday.

His other positions are more or less in line with many Republican primary voters: the need to seal the border with Mexico, deep climate-change skepticism, opposition to same-sex marriage and national education standards.

On the subject of race and racism, he has sent mixed messages.

After the June 17 church massacre in Charleston, S.C., Dr. Carson challenged those who played down the role of racism. "Not everything is about race in this country. But when it is about race, then it just is," he wrote in an op-ed.

The shooter was eventually charged with federal hate crimes.

Later in the summer, during a visit to Ferguson, Mo. – the scene of clashes between police and protesters following the killing of unarmed black teenager Michael Brown in 2014 – Dr. Carson talked about the need to "de-emphasize race," a position that was criticized by Black Lives Matter activists as minimizing the issue of racism.

"Education is the great divide," he said. "Children need to understand that they have to get a good education." 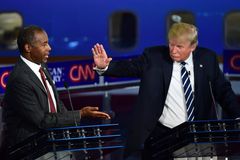