In a remarkable plea for help, the International Criminal Court has warned that it is becoming increasingly futile to ask the UN Security Council to take action against the growing number of countries that refuse to arrest indicted war criminals.

The ICC concluded on Thursday that South Africa flouted its legal obligations by failing to arrest Sudanese President Omar al-Bashir on charges of genocide and war crimes. But it also ruled that it is pointless to send the case to the United Nations when the Security Council has repeatedly refused to act on similar cases.

The widely anticipated ruling in The Hague, broadcast live on South Africa television, was a strong rejection of South Africa's claim that state leaders have immunity from prosecution – an increasingly common argument from the African Union and many African nations.

In 2015, the South African government allowed Mr. al-Bashir to attend a summit in Johannesburg, despite its obligations under the ICC's founding treaty. It then allowed him to slip out of the country without arrest, even after a court ordered his arrest. This was a clear violation of South Africa's legal duties, despite the government's arguments to the contrary, the ICC ruled.

The court, however, offered an olive branch to South Africa by refusing to seek action against it at the Security Council or the ICC's assembly of states. The court noted that South Africa's domestic courts have already ruled the government in breach of its ICC obligations, and the government has decided not to appeal that ruling, which amounts to an implicit acknowledgment of its wrongdoing.

The ICC's mild response to the violation could open the door to a compromise with South Africa, which has threatened to withdraw from the court. By refraining from any further action against South Africa, the ICC may have made it politically easier for the country to remain as a member.

The ruling cited six previous cases where the ICC has asked the Security Council to decide what to do on violations by the court's members, especially after failures to arrest Sudan's President. It also cited 24 Security Council meetings where the subject arose. Yet in every case, nothing was done.

All of these meetings and reports to the Security Council in recent years "have not resulted in measures against States Parties that have failed to comply with their obligations to co-operate with the Court, despite proposals from different states to develop a follow-up mechanism," the ICC said in its ruling.

Analysts said the court was signalling its mounting frustration with the inaction by the Security Council and the ICC assembly. The ruling makes it clear that the court lacks any effective enforcement mechanism for its rulings against its member states. This puts pressure on the Security Council and the ICC's members to find a way to strengthen the enforcement procedures, analysts said.

South Africa's attempt to withdraw from the ICC was once seen as the trigger for a much bigger withdrawal by many African nations, especially since South Africa was an influential early supporter of the court.

The court has only convicted Africans in its 15-year history, sparking accusations of bias. A mass withdrawal strategy was debated by the African Union this year. Despite this talk, only three African countries announced plans to withdraw from the court, and one of them – Gambia – has reversed its decision.

South Africa's own attempt to withdraw from the ICC was stymied this year when a domestic court ruled that it had failed to follow the correct procedures for getting parliamentary approval.

South African President Jacob Zuma, speaking to a conference of his ruling political party on the weekend, said his government has begun to "rectify" the procedural problems from its failed withdrawal attempt. "The decision to withdraw was a principle matter, and the principle still stands," Mr. Zuma said.

But he also acknowledged: "We have taken note of the latest reluctance of other member states to withdraw en bloc."

Human rights groups welcomed the ICC's ruling against South Africa's refusal to arrest Mr. al-Bashir. "What's most important now is such shameful failure is never repeated," said a statement by Netsanet Belay, the Africa director of research and advocacy at Amnesty International.

"It is shocking that other states parties, such as Jordan, are also failing in their obligations to arrest al-Bashir, and this decision makes it clear that they do so in flagrant violation of international law. There must be no impunity for crimes under international law." 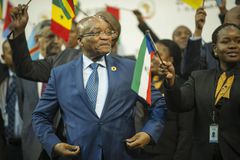