As police launched a dramatic raid to arrest associates of the Zuma family in a widening corruption investigation, President Jacob Zuma continued to defy a decision by the ruling party that he must resign from office.

Mr. Zuma, in an angry and rambling interview on the state broadcaster, warned that the party's decision could provoke "violence" among its members. He complained that he was being "victimized" by an "unfair" decision by his own party comrades.

"This is something they are going to regret," he said. "Some people are not going to like it. It's going to cause bigger problems…. We're being plunged into a crisis that I'm sure my comrades will regret."

Mr. Zuma's defiance has escalated the political crisis that has left the South African government in disarray. In his interview, he appeared to be confirming the fears of many South African politicians, who have worried that Mr. Zuma could encourage his followers to take to the streets in protest or violence.

He said the ruling African National Congress had failed to give any reasons for its decision. "There is no evidence, nobody has said I've done something wrong. I don't understand. I don't think it is fair.... This has been done in a manner where I'm being victimized here."

His refusal to resign on Wednesday triggered a swift move to force him out of office with a vote in South Africa's parliament. The ANC and all major opposition parties announced they would support a motion of non-confidence on Thursday at 2 p.m. local time, making Mr. Zuma's departure a near certainty.

The vote would immediately remove him from office. Under the plan agreed by all parties, parliament would choose a new president on Friday morning. The ANC will use its majority to install its new leader, Cyril Ramaphosa, as the president.

Several opposition parties said they would prefer to impeach Mr. Zuma, which would strip him of his salary and benefits. But parliament is currently revising its impeachment rules in a court-ordered process, so the parties will use the non-confidence process, which requires only a simple majority to pass.

John Steenhuisen, chief whip of the opposition Democratic Alliance party, said Mr. Zuma's television interview on Wednesday showed that he was using a "Stalingrad" defence to stall every action against him.  "This is Mr. Zuma playing for time again," he said.

But he predicted that the tactic will not work, with the criminal investigation drawing nearer to him. "President Zuma is going to end up in jail."

After postponing much of parliament's work for the past 10 days while the Zuma saga unfolded, the ANC is now anxious to catch up on the delayed work. "Everything has almost come to a standstill, so we need to move," said Paul Mashatile, a senior ANC official. "We don't have time to be bickering over who should be president."

The ANC had expected Mr. Zuma to address South Africans on Wednesday morning in response to the ANC's decision on Tuesday to order him to resign. But after briefly scheduling a media appearance, Mr. Zuma cancelled the appearance and disappeared from view until his television interview later in the day.

The ANC wants Mr. Zuma to make way for its newly elected leader, Mr. Ramaphosa, who won an ANC conference vote in December after campaigning on an anti-corruption promise.

The ANC's national chairperson, Gwede Mantashe, warned that Mr. Zuma would be "devoured by vultures" if he disobeyed the ANC's order to resign.

"Once you resist, we are going to let you be thrown out through a vote of no confidence, because you disrespect the organization and you disobey it," Mr. Mantashe told reporters.

Meanwhile, the long-simmering corruption scandal that has surrounded Mr. Zuma is finally leading to arrests.

Shortly after dawn on Wednesday morning, an elite police unit raided the luxurious Johannesburg villa of the Gupta brothers, the wealthy business partners of Mr. Zuma's son, Duduzane. They said the raid was part of an investigation into an allegedly corrupt farm project. The project was a criminal scheme that diverted millions of dollars of government money into Gupta bank accounts, prosecutors say.

Heavily armed tactical police blocked the street leading to the Gupta villa, telling reporters that it was a "crime scene."

The elite unit, known as the Hawks, later announced that they had arrested three suspects. Two other suspects had agreed to hand themselves over, they said in a statement.

One of the Gupta brothers, Ajay Gupta, and a Gupta business associate were among those detained for questioning, local media reports said. One report said Duduzane Zuma could be among those targeted in the arrests, with a total of 15 suspects on the arrest list. A former senior official of Free State province, where the farm project was located, were also among those arrested on Wednesday.

The Hawks said they were making arrests in several locations in an investigation into "state capture" – the common term here for widespread corruption in which Gupta business interests have allegedly captured state agencies for their own profit. 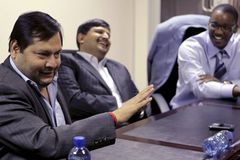