The "discipline" of China's authoritarian political system should be considered as a potential recipe for economic growth in Africa and other developing regions, South African President Jacob Zuma says.

Mr. Zuma, on a four-day official visit to China, criticized the West and lavished praise on his Chinese hosts as he described a world where dynamism is "shifting from North to South and from West to East."

His unexpected praise for the authoritarian Chinese system, coming from the leader of one of Africa's biggest democracies, is further evidence of Beijing's growing influence in Africa. Within the space of a few years, China has emerged to become Africa's second-biggest trading partner and a key source of support for its governments.

Last year, China overtook the United States to become the biggest trading partner of South Africa, the richest economy on the continent.

Mr. Zuma made it clear that he is tired of hearing advice from Western governments that demand Western-style democratic systems. Instead, he suggested, the developing world is ready to learn political lessons from the dramatic rise of China, where opposition is muzzled and dissent is crushed.

"The developing world was told that if it did not Westernize and change its political systems to mirror those of the West, they could forget about achieving economic growth and development. Now we are asking what we could learn from other political systems and cultures. Is the political discipline in China a recipe for economic success, for example?"

Many African leaders are resentful of aid from Western institutions because the money usually comes with conditions attached, including requirements for market reforms and even political reforms. Beijing, in contrast, makes a point of doing business with any African leader, regardless of how autocratic they might be, and never demanding any political conditions or democratic reforms. This has made China increasingly popular and influential in Africa, especially as China's financial clout has soared.

Governments such as Ethiopia, which have growing links to Beijing, have used Chinese surveillance technology to bolster their power over their citizens, analysts say.

Chinese trade with South Africa has climbed rapidly in recent years, reaching about $16-billion (U.S.) last year and leaping by a further 56 per cent in the first half of this year, compared with the same period last year, according to Chinese statistics. Much of the increase is in exports of South African minerals and iron ores to feed China's insatiable industry.

This week, China dangled the possibility of providing a $30-billion high-speed rail line between Johannesburg and the port city of Durban, using Chinese technology and financing. It's an example of the kinds of lucrative deals that China can offer African countries as it grows in power.

The lure of China was further demonstrated by the size of Mr. Zuma's delegation. He brought 13 cabinet ministers and 370 business leaders with him to China - the biggest delegation ever to accompany him on a foreign visit.

"China is still a developing country facing challenges of poverty and inequality, but it is doing exceptionally well and provides many lessons for others in both the developed and developing world," Mr. Zuma said in his speech on Wednesday.

In another speech in Beijing, a day earlier, Mr. Zuma noted that China was the biggest economy in the world when its naval ships first visited Africa in the 15th century. "The rise of China indicates that the world is now returning to its historical economic powers and trade patterns," he said.

South Africa is also hoping to join the so-called BRIC grouping, which consists of Brazil, Russia, India and China. Over the past year, Mr. Zuma has visited all of the BRIC nations to lobby for a place in the informal group, and he told reporters on Wednesday that he is expecting a "favourable decision" by the BRIC countries to South Africa's request to join. The group is seen as a counterbalance to U.S. influence over the global economy.

The rapid growth in China's investment and trade in Africa has provoked controversy across the continent, but it is undoubtedly successful and highly visible.

- China's annual trade with Africa, a mere $2-billion in 1999, soared to an astonishing $107-billion in 2009, allowing China for the first time to rival the United States as the continent's biggest trading partner

- In Angola, China has gained access to the country's oil wealth by lending $8-billion for new roads, railways and hospitals, built largely by China's own companies.

The Chinese-built hospitals are impressive showcases for the new Angola. But some health experts are calling them unnecessary and costly. Instead of showcase projects, the country desperately needs to solve its shortage of doctors, nurses, midwives and other health professionals.

China is already the biggest trading partner of oil-rich but authoritarian countries such as Sudan and Angola. In 2009, a Chinese conglomerate announced one of the biggest investments China has ever made in Africa, a $2.6-billion stake in Liberia's main iron-ore mine.

- In the Democratic Republic of the Congo, China announced a $9-billion plan to build thousands of kilometres of railways and roads, 32 hospitals, 145 health centres, two hydro dams and two airports - all in exchange for access to lucrative copper and cobalt resources.

- The Chinese investment boom in Africa is fuelled by the exploitation of African workers, said an April study by the African Labour Research Network. Based on two years of research, the study focused on Chinese employers in 10 African countries. It documents a pattern of labour abuses across the continent.

- In Namibia, for example, the study found that every Chinese construction company was paying far less than minimum wage. In Malawi and Ghana, many employees of Chinese companies are required to work up to 12 hours without a break, sometimes for seven days a week. In Nigeria and Kenya, workers at some Chinese factories are locked inside their factories all day to prevent them from leaving, resulting in dozens of deaths when fires broke out.

Across Africa, governments are leasing farmland to land-hungry countries in Asia and the Middle East .

• China secured 2.8 million hectares for a biofuel oil palm plantation in the Democratic Republic of Congo and is seeking 2 million more hectares in Zambia for biofuels. 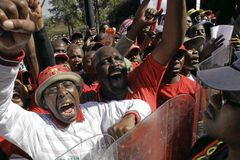 South Africa's Zuma condemns arrest of gays in Malawi
May 27, 2010 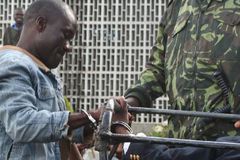