As 300 disgruntled South African firefighters prepared to fly home from Alberta on Sunday, questions were mounting over a contract that gave them barely one-third of the daily amount Alberta had allocated for their services.

The issue has sparked a political uproar in South Africa that reached the highest levels on the weekend, when President Jacob Zuma ordered his environment minister to find "a solution to the impasse."

While some South Africans criticized the firefighters for going on strike just six days after beginning their work in Alberta, many others – including an opposition leader – said their strike was justified by the need to fight for their rights and equal pay.

Alberta Premier Rachel Notley and other officials have confirmed that Alberta agreed to pay $170 per day for each of the South African firefighters. Yet the firefighters signed contracts in which they will receive only a "stipend" of $50 per day – far below the Alberta minimum wage of $11.20 per hour. This discrepancy was "disturbing" and "not acceptable," Ms. Notley said last Thursday.

The payment of $170 daily to their South African employer was intended to cover the $50 stipend, plus their regular South African pay (as little as $10 per day), along with "payroll burden, administration costs, training and other costs of preparing the firefighters to travel," according to Kim Connors, executive director of the Canadian Interagency Forest Fire Centre, which was responsible for bringing the firefighters to Canada.

In addition, Alberta is covering all of their costs for accommodation, travel and meals.

Their employer, a South African agency known as Working on Fire, has not explained the huge pay discrepancy, despite three days of e-mails and telephone calls from The Globe and Mail.

If the deployment in Canada had continued for as long as a month, as contemplated by their agreement, the South African agency could have reaped more than $1.5-million from Alberta, with the 300 firefighters receiving only about one-third of that amount.

The agency did arrange a 10-day "boot camp" for the firefighters before their deployment to Canada. But this would account for only a small fraction of the additional payments.

On Sunday, the agency said all questions should be answered by the South African government, but a government spokesman did not respond to questions about the pay.

Ms. Notley said last Thursday that the firefighters must be paid at least the Alberta minimum wage.

And in a statement on Sunday, South African Environmental Affairs Minister Edna Molewa said she "concurs fully with sentiment expressed by [Premier] Rachel Notley that remuneration for the firefighters should be fair and equitable."

The statement by Ms. Molewa seems to be a major shift, since the government's own agency had negotiated the $50 stipend earlier.

A document from the Canadian interagency centre, obtained by The Globe and Mail, shows that $575 per day is usually allocated for each Canadian firefighter on loan from a Canadian agency.

It is unclear whether this is intended to cover some form of expenses in addition to the wages of the firefighters.

Working on Fire, the South African agency, is a government-funded non-profit program to provide firefighting jobs for about 5,000 previously unemployed young South Africans. Its daily wage – described by the Canadian interagency centre as a "normal daily rate" – is actually below the South African minimum wage, because it is a special job-creation program.

While the program is a non-profit "public-private partnership," it has a private "implementing agent" with a similar name: Working on Fire (Pty) Ltd. This company receives an annual "management fee" of about $338,000, according to an answer provided by Ms. Molewa in the South African Parliament last November. It is a subsidiary of Kishugu Holdings (Pty) Ltd., a large South Africa forestry company that reportedly has ambitions of listing on the New York Stock Exchange. 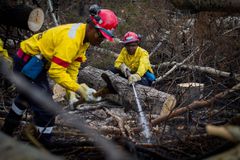 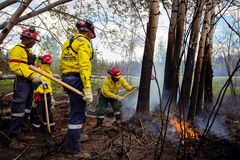 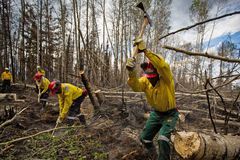