As a Congolese immigrant child in the big city, Franc Leya stared in fear at the dark tower that loomed on the skyline, where thousands of squatters lived a grim existence under criminal gangs. "If you don't do well in school, you'll end up there with the junkies," his mother warned him.

But one day the lights came back on at the Ponte tower and the gangsters who had hijacked the 54-floor skyscraper were driven out. Today it is home to 3,500 tenants, with a waiting list to get in, and it is Mr. Leya who takes tourists on guided visits to the spectacular sights of Africa's tallest and most notorious residential building.

The Ponte saga is a classic South African story. Once a Jacuzzi-filled playground for the segregated white elite in the apartheid era, then falling into chaos in the 1990s as the wealthy fled to the suburbs, then the object of failed luxury-condo schemes, the tower is now undergoing a renaissance as an icon of Johannesburg's urban revitalization.

Most of its tenants today are immigrant workers and university students – Congolese, Zimbabwean, Nigerian – and a smattering of black and white South Africans. For most, it is just a cheap and clean place to live – with some of the most stunning views in Africa.

Its modernist architecture is extraordinary: 485 apartments in a tube-like tower, each with wrap-around windows and vertiginous vistas over a sprawling city. Inside the concrete cylinder is a hollow core, with a layer of exposed bedrock at the bottom. When a tour group steps into a top-floor apartment and glimpses the views (and the middle-class décor), the gasps of astonishment are "priceless," Mr. Leya says.

Yet what really attracts the tourists, he says, is the terrifying reputation of Ponte and the surrounding Hillbrow neighbourhood, long feared as a crime haven. Hillbrow is infamous for rebellious residents who celebrate New Year's Eve by tossing refrigerators and microwaves from the rooftops of their apartment buildings. The neighbourhood has become safer and more respectable over time, yet the myths continue, as they do about Ponte itself.

The tours of Ponte and Hillbrow are organized by Dlala Nje, a community centre on the ground floor of the tower, dedicated to challenging the old stereotypes about Johannesburg's most infamous building.

"Everyone has been brought up to think that it's a hellhole and if you go into it you'll never come out and you'll become a sex slave," says Nickolaus Bauer, a South African journalist and co-founder of Dlala Nje, who lives on the 51st floor. "We're slowly changing that perception."

The tower, designed by 29-year-old architect Rodney Grosskopff in what is called the "New Brutalist" style, was known as Ponte City when it opened its doors in 1975, immediately dominating the city skyline. Descriptions of it invariably turn to science fiction: writers have called it utopian or dystopian, with the film Blade Runner often cited. The tower was a self-contained city, with its own restaurants and shops. Its apartments were decorated with the luxuries of the time. Shag carpeting featured heavily.

But as apartheid began to erode, Hillbrow became a racially mixed neighbourhood and the government cut back on municipal services, letting it fall into decline. By the 1990s, the Ponte tower was known as a drug den and the parking garage was a brothel. Gangs stripped it of anything worth selling. Officials discussed whether the whole building should be turned into a prison. The hollow core began to fill with garbage and rubble – several stories high.

In 2007, there was a new wave of excitement: developers announced plans to turn the tower into a luxurious "New Ponte City" of expensive condos and $500,000 (U.S.) penthouses, touted as "New York style." There would be a cinema, a gym, an upscale grocery store, a pianist in the lobby and even a climbing wall in the hollow core. Tenants were evicted from most of the tower and the renovations began.

The dream was a disaster. With the global economic recession of 2008, the developers couldn't raise enough money for their $14-million project and it was abandoned halfway. Debts piled up as builders and suppliers went unpaid and would-be buyers demanded their deposits back.

For a while, the giant rooftop advertising sign was the only thing making much money. But then the tower's owners (a South African trucking firm) realized that its salvation was right under its nose: the aspirational African migrants and young emerging middle classes of the inner city itself.

Instead of offering luxury, the owners decided to offer security. They cleared away the truckloads of garbage in the core. Heavy turnstiles were installed, unlocked by a fingerprint system and supervised by 24-hour security guards. Strict new rules were introduced: limited numbers of tenants in each unit, no visitors after 9 p.m., surveillance cameras in the elevators, surprise inspections and round-the-clock security patrols.

Rents today are as low as $200 for the cheapest units. Even the penthouses, now converted to ordinary two-bedroom units, are just $500 a month. The tower's aura is far from glitzy. Its grubby interior windows are sealed shut and some of its downstairs shops are still empty. At the entrance of a small health clinic on the ground floor, a sign warns: "Stop Cholera."

But the owners are optimistic. "Our goal is to get it back to where it was," says Ria Breedt, the tower's famously strict office manager. "And it almost is."

Mr. Bauer predicts that the building will eventually be gentrified into a haven for the elite again. But in the meantime, he loves his life on the 51st floor, even if the rules are sometimes too harsh and he has to dodge the occasional piece of flying rubbish from an upstairs window when he exits the building.

Johannesburg has a complicated relationship with the rest of Africa. Its foreigners are sometimes the targets of xenophobic violence. But whether the city likes it or not, the Ponte tower is a symbol of Johannesburg's new status as a true African melting pot, a powerful lure for African migration.

Architectural writer Clive Chipkin says the building is famous among migrants as far north as Somalia. "You meet people from the Congo," he told a local newspaper, "and they say, 'We'll meet at Ponte.'" 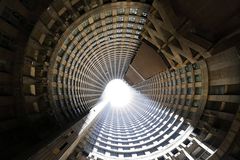 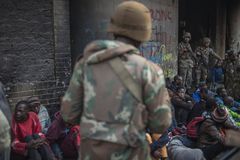 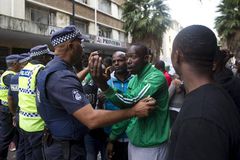 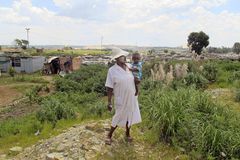