In an unruly country where disputes are often settled by young men with Kalashnikovs, one of the gentlest dissenters is a poet and playwright who prefers to make his points with Shakespeare.

Two years ago Joseph Abuk directed an acclaimed South Sudanese version of Cymbeline at the Globe Theatre in London – a version that drew parallels between the invaders of imperial Rome and the authoritarian Khartoum regime that waged war on southern Sudan for decades.

Today another brutal war is playing havoc with his theatre company. It's difficult to stage plays when your actors and audiences are in refugee camps or silenced by military curfews.

"War splinters and scatters people, and it takes time to reassemble them – or even to find out where they are," says Mr. Abuk, a jovial intellectual who speaks six languages and helped write South Sudan's national anthem when the country won independence in 2011.

"Who will dare come to one of our shows now?" he asks. "This is not an atmosphere for drama."

But while war disrupts his theatre company, it also inspires his writing. He is already pondering a potential new play about the power struggle between rival politicians that triggered the fighting in South Sudan that has killed as many as 10,000 people over the past month. "This is a major tragedy – a terrible, terrible thing, even for people like us who are accustomed to war," he says. "And it won't go uncommented on."

He thinks perhaps he will write a drama about a traditional chief in the South Sudan countryside. The chief becomes too ambitious and wants to rule the whole tribe. The people go to a local prophet to ask what to do. The story will be recognized by his audience.

Mr. Abuk, who believes he is about 64 (based on a doctor's estimate, since he was born in a remote village in southern Sudan in an era without birth certificates), became fascinated by music and theatre as a schoolboyin primary school. His headmaster taught him to play the flute, he was voted best actor in a school festival, and he bought himself a guitar. "I didn't know anything about the guitar, but you could already see my urge to be an artist," he remembers.

Becoming an artist was an unorthodox career choice then in Sudan, a country of poverty and war ruled by an oppressive regime in Khartoum. As civil war spread, he became a refugee, walking for five days over the mountains in 1963 to reach shelter in camps in Uganda and Kenya. He eventually worked as a high school teacher in Uganda. When he returned to southern Sudan in 1978, he formed a theatre group called Skylark, one of the first in the country.

After South Sudan's independence in 2011, he was invited to assemble a theatre company to perform at the Globe Theatre in London. It was a pre-Olympic festival at the rebuilt site of Shakespeare's famous theatre featuring troupes from 37 countries. He recruited actors and translated Cymbeline into Juba Arabic, the street dialect of South Sudan.

Shakespeare's play is about a British rebellion against Roman dominationin the era of imperial Rome, and it evoked echoes of Khartoum's neo-colonial relationship with southern Sudan during the protracted civil war – what he calls "the relationship between the powerful and the exploited." He put the British soldiers in zebra skins, added drums and tambourines, and punctuated the whole spectacle with South Sudanese dances.

The play was lauded by British critics, who called it "joyous" and "irresistible." Audiences gave it standing ovations. "We shocked the civilized world," Mr. Abuk laughs. "We were confronted by a forest of microphones by the British media."

South Sudan politicians did not provide any significant help to the theatre company, but they travelled to London for the theatre performance. After the smash success of the first performance, the officials were so astonished that they giddily promised to finance Mr. Abuk's future theatre projects, even promising to slaughter a bull to celebrate his achievements.

"Of course when we came back it was a different story," he says. "In Africa, leaders don't see drama as anything of fundamental importance. They see it as just playing around cheekily. But life itself is drama."

Mr. Abuk founded an annual theatre festival in South Sudan and helped create a network of drama clubs in its schools. Riding the wave of praise from the Globe Theatre, he created the South Sudan Theatre Company.

But there was still no government support. He was required to work for months on a legal registration for the theatre company – and then was informed that he couldn't call it a "company" because it might sound like a commercial business. So after its registration last May, it is now legally called the South Sudan Theatre Organization.

Meanwhile, Mr. Abuk was appointed director of drama and music for state radio and television. It was a nice title, but he was never given an office or a salary. He considers himself "jobless" despite his appointment.

"If you're a critical artist, you'll find it difficult to be appreciated by the government," he said. "It's the same all over Africa. I saw it in Kenya and Uganda too. But I never censor myself. Maybe that's why I'm jobless – because my tongue doesn't sit quietly inside me."

He remembers how the south was always freer than the north in the pre-independence days. But those freedoms seem to be eroding, and South Sudan's government has increasingly succumbed to authoritarian impulses. Journalists are often arrested, and critical articles about the government have sometimes led to the suppression of entire editions of newspapers, Mr. Abuk says.

The latest war, which has forced 860,000 people to flee from their homes, is proof that South Sudan is not a real democracy, he says. But he vows to keep writing, no matter what pressures he might face.

"Most of the security forces people aren't very smart," he says. "If you're a good writer, it will take time for them to understand what you've written." 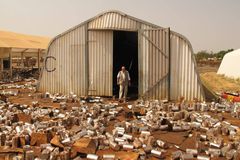 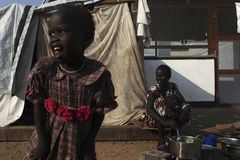 Both sides at fault as bodies pile up in South Sudan
January 29, 2014 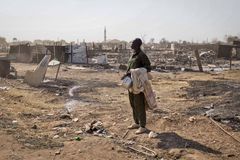