With less than a percentage point separating President Barack Obama and Republican nominee Mitt Romney, based on an average of national polls, the conventions they just wrapped up showed what each candidate thinks he needs to do to pull ahead of his rival.

Mr. Romney made a rhetorical move to the middle in Tampa, while Mr. Obama indulged the liberal wing of his party in Charlotte. Each had good reasons to act accordingly.

Most voters already think Mr. Obama is closer to the centre than Mr. Romney, who spent the primaries trying to prove his "severely conservative" bona fides to a skeptical base. In Tampa, Mr. Romney needed to look less radical than most of the electorate thinks he is.

Mr. Obama, meanwhile, cannot win in November without maximizing turnout among women, students and minority voters. Hence, there was endless talk in Charlotte about abortion, gay marriage and immigration, while Republicans (for a change) acted as if they did not exist. Mostly, what they talked about in Tampa was small business.

Beyond the raw politics involved in these calculations, however, each presidential candidate revealed something of his authentic self in his nomination speech.

For all his Tea Party pandering, Mr. Romney showed he is still a Massachusetts Republican at heart. He still thinks social issues have no place in politics. He still believes there is no solution beyond the ken of consultants with a business plan. He still thinks government can and should be run like a corporation.

Despite his professed disdain for ideology, Mr. Obama showed he is still an urban liberal. He mentioned the deficit in Charlotte, but you did not get the sense that he feels a burning need to tackle it. Despite the collapse of Solyndra and anemic sales of the Chevy Volt – both heavily subsidized by him – he showed he still thinks government can pick winners.

All things considered, Mr. Romney had more riding on a successful convention than Mr. Obama. That is because Mr. Obama has more paths to the 270 electoral votes needed to clinch victory. Conceivably, he can even win re-election without taking Ohio and Florida.

Without those states, it would be nearly impossible for Mr. Romney to contemplate victory. (Hence, his move to the middle in Tampa.) He also likely needs to win back Virginia, North Carolina and a few other states that Mr. Obama snatched from the Republican column in 2008.

If all that sounds like a tall order, consider the factors working against Mr. Obama.

In 2008, voter turnout was about 10 percentage points higher than usual. Not all of those additional voters cast a ballot for Mr. Obama, but most of them did. Despite that, he won Ohio by only four points, and Florida by three. A two-percentage-point swing in those states this year would put them in Mr. Romney's column. With a moderately unpopular President on the ballot, and lower turnout among young voters and minorities, such a swing seems eminently possible. In Ohio, Mr. Obama can tout the auto bailouts. In Florida, he can accuse Mr. Romney of seeking to dismantle Medicare. But neither argument may be enough to compensate for a weak economy.

Virginia and North Carolina are both traditionally red states that have been trending purple due to an influx of college-educated professionals and minorities. Even so, North Carolina seems all but lost to Mr. Obama this time, despite the love and money Democrats showered on the state by holding their convention here.

Mr. Obama won North Carolina by less than 15,000 votes in 2008, while the state's unemployment rate remained stuck at 9.6 per cent in July (compared to a national average of 8.3 per cent that month).

As Mr. Obama prepared to deliver his nomination speech on Thursday, Gallup noted that his approval rating remained below what the pollster called "the historical safety zone" for re-election. It has failed to crack the critical 50-per-cent threshold since the death of Osama bin Laden, hovering in the mid-40s for most of the past three years.

Though it spiked to 52 per cent in Gallup's daily tracking survey on Friday, up from a 47-per-cent average for the week, that could be a convention-related blip. The August jobs report released on Friday may soon push Mr. Obama back outside the "safety zone."

With the labour-force participation rate sinking to a 32-year low in August, there is no way to put lipstick on the numbers, though Democrats certainly tried. On Friday, Mr. Obama noted that 4.6 million private-sector jobs have been created since early 2010. What he did not mention was that the U.S. private sector has created barely 400,000 net new jobs since he took office in early 2009.

Americans, regardless of how Democrats try to spin it, do not feel better off than four years ago.

How much they blame Mr. Obama for that could determine his fate.

The history of presidential elections going back almost four decades is pre-October polls usually depict a horse race. Yet, in only three of nine presidential votes held since 1976 has the margin of victory been even remotely close.

In 1980, Ronald Reagan trailed Jimmy Carter into October but ended up beating the incumbent Democrat by 10 percentage points. John McCain led by five points after his 2008 convention but lost to now-President Obama by seven points in November.

So, this year's race may or may not be as close as it looks.

Opinion
Elizabeth Renzetti: The elite battle over misery, and everyone’s a loser!
September 7, 2012 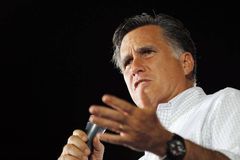 Clint Eastwood defends poorly received RNC chair cameo
September 7, 2012
Follow Konrad Yakabuski on Twitter @konradyakabuski
Report an error Editorial code of conduct
Due to technical reasons, we have temporarily removed commenting from our articles. We hope to have this fixed soon. Thank you for your patience. If you are looking to give feedback on our new site, please send it along to feedback@globeandmail.com. If you want to write a letter to the editor, please forward to letters@globeandmail.com.
Comments