The past, present and future of America's political gridlock is not on Capitol Hill. It's in Marietta, Georgia.

The hodgepodge of red-bricked colonial splendour and sprawling, charmless plazas is the heart of Georgia's brand of transformational conservatism. It is the congressional district once represented by Newt Gingrich, the blustery Republican House speaker who burnished his name and flamed out after the government shutdown of 1995 and 1996.

It's also where, every Thursday, dozens from the Georgia Tea Party congregate in a repurposed car dealership on Roswell Street, beginning with a short prayer, the Pledge of Allegiance to the flag and to the Tea Party's mission: reining in rampant spending and restoring individual liberties stifled by Big Corporations and Big Government.

Though scattershot in its approach, the Tea Party is upending state politics in a dramatic way here and elsewhere in the North and South. Though the national GOP never took it too seriously, the Tea Party is turning the Republicans inside out and has become the wild card of a shutdown that could have disastrous economic consequences.

If Congress does not raise the ceiling on government borrowing authority beyond $16.7-trillion by Oct. 17, the United States would soon head toward a historic default on its debt payments, risking a global economic crisis.

The lessons of Mr. Gingrich loom large among Tea Party members here and across the United States. As they see it, his obstructionism on fiscal issues during the last shutdown was bang on, but his principles came at the expense of his popularity and led to his ouster. He was a convenient political scalp – and extreme fiscal conservatism went down with him. To this latest cadre of party reformers, there is a clear takeaway: no leader, no scalp.

Four days into the partial U.S. government shutdown, Republican moderates and Democrats must long for a figure like Mr. Gingrich, a clearing-house for blame, rage and mockery. Now they have only the likes of Ted Cruz, a lion of the mercurial movement but hardly its leader. And the Tea Party is the only political group that is pleased. There are 800,000 federal workers staying at home and saving the country wasteful dollars – unless the government reimburses them, which would be regrettable.

More important in this ongoing, going-nowhere clash over budgets, health care and the debt ceiling, mainstream Republicans are more embattled than they were in 1996: They have to horse-trade with Democrats, as they did 17 years ago. But they also have to engage with the leaderless, decentralized Tea Party members whose agendas vary widely. They have fewer and fewer horses to trade.

For Georgia Senator John Isakson, who lives in Marietta, this stalemate resonates personally. "I am a byproduct of the 1996 shutdown. I replaced Newt Gingrich," he told The Globe and Mail. "The years 1995 and '96 were not good for the Republican Party and Newt Gingrich."

This week Mr. Isakson called for unity within his own party, saying that a food fight is not the way to move forward. Shutdowns, he added, have consequences. But if the party needs to retain its primacy, it has to hash out its differences with the Tea Party. But how?

"There are hundreds of chapters, and they're not united under one banner," he explained. "There are different people who speak for different elements of the party. They don't always agree, and those are the difficulties when you don't speak with one voice."

In the parking lot on 900 Roswell St. in Marietta, J.D. Van Brink was sitting in his minivan with a sign in his back window that advertised the Thursday discussions. It was almost thrilling to see someone from the Tea Party in public. They are not the most accessible bunch. There is no central number anyone can draw up on Google. The leaders have anonymous e-mail addresses and generic voice mails that read the number back to the caller. It's as if they all live underground.

Many prefer this lack of centralization, hoping the movement will never become a big party with big leadership. "I hope it remains a grassroots group that's not beholden to bow down to its leaders," Mr. Van Brink said.

He also said the group realizes that if it did have leaders, they would become targets for their adversaries. "They were able to target Newt Gingrich and tarnish his name."

A bearded man wearing a stars-and-eagle tie that would make Stephen Colbert cry with envy, Mr. Van Brink is chairman of the Georgia Tea Party. His title and the group's name sound official, but like Atlanta itself, there is no real core; it's decentralized, a network of associated organizations without a control centre. For a movement that prides itself on a simple message, its org chart is very complex.

In this state alone, there are an estimated 90 chapters. There is the Green Tea Party, whose leader, Debbie Dooley, promotes solar panels and is working with the Sierra Club to create a consumers' bill of rights. There are the Tea Party Patriots – a national group, not to be confused with the Georgia Tea Party Patriots. But let's be clear: They are in a different category from the Georgia Tea Party that Mr. Van Brink represents. "That does get confusing for people," he said. "The first three words of their four-word name are the first three words of our name. Most people who are in the know know the difference."

However diffuse, these groups influence the state's Republican Governor, Nathan Deal, who is up for re-election next year. Last spring, Mr. Deal joined several other states in blocking an effort by the Obama-backed program to impose federal math and English education standards on public schools. He also rejected the expansion of Medicaid prescribed by the Patient Protection and Affordable Care Act. Critics say that leaves the poorest Georgians vulnerable and threatens the bottom lines of hospitals that were counting on new income from the changes.

Government spending was Thursday evening's big topic. A huge wave of mirth swept through the retrofitted auto showroom when it was announced that 97 per cent of the Environmental Protection Agency is non-operational. Low guffaws were heard when Mr. Van Brink told the crowd that Senate Majority Leader Harry Reid had said Republicans were bowing down to the Tea Party gods.

The evening's speaker – a local tax-reform advocate and hand from the Reagan administration, Lance Lamberton – gave a very inside-baseball speech about how Article V of the Constitution could be used to curb the dangers of government spending. Mr. Lamberton went on for an hour.

Most of the attendees were couples – not your average date night. They were rapt. There were notepads out. They disputed the fine points of the Constitution. The response was part gospel – a lot of knowing noises that sounded like amens – with a Quakerish quality to it: People just stuck up their hands when they felt like talking and were allowed to go on. And on.

One guest railed at the word "entitlements," the legislated programs the federal government provides. Another said: Father got off the boat, and you know what he was entitled to do? Get off the boat!

Mr. Reid recently called Tea Party members anarchists. Had only he been at this meeting.

There is something atavistic about the Tea Party, a longing to return to the days when budgets were balanced, streets were clean and Big Government and Big Corporations hadn't outgrown their innocence. Nostalgia helps define the party, but it also allows members to deny how much power they have in this critical moment of American history. It's a shrewd if not defensive kind of romanticism. The country will never be how they want it, so why join the official political process?

"Like I said, if I had the power of the gods, my job would be a lot easier," Mr. Van Brink said.

What each of the three sides in the U.S. shutdown need to claim a victory
October 4, 2013 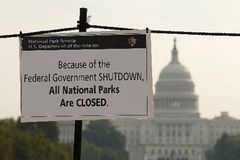 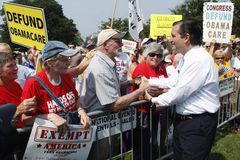 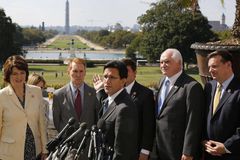