Prime Minister Benjamin Netanyahu earned the right in Tuesday's Israeli election to be asked to try to form the country's next government, but whether he will succeed or not is up to a neophyte politician named Yair Lapid, whose party's second-place finish has stunned the country.

Riding a wave of protest over such issues as the cost of housing and the privilege given Israel's ultra-Orthodox Haredim to avoid the military draft, Mr. Lapid, a popular former broadcast journalist, made these two concerns the centrepiece of his campaign.

Another first-time politician, Naftali Bennett, argued for much the same things, but Mr. Bennett, leader of a national religious party known as the Jewish Home, also championed the expansion of Israeli settlements in the West Bank and the abandonment of the idea of a Palestinian state – a position too extreme, perhaps, for many Israelis.

Whatever this election was about, it wasn't about making peace with the Palestinians, nor about Israel's relations with Arab states in the region. It was about what Israelis wanted in their daily lives.

The outcome of Tuesday's vote, however, leaves Mr. Netanyahu with one of two choices, both with broader, regional implications. Either he tries to govern with a paper-thin majority of right wing and ultra-Orthodox parties (in which case he will have to adopt an even more confrontational approach to Palestinian statehood as demanded by Mr. Bennett), or he will reach out to the centrist Mr. Lapid to form a broader coalition.

Based on the phone call he made to Mr. Lapid late Tuesday night, he appears to have chosen the latter approach.

What remains to be seen now is whether the Prime Minister will jettison the ultra-Orthodox and their privileges from his coalition – or leave Mr. Bennett and his pro-settlement views out of a new government. The choice may be made for him by Mr. Lapid.

In either scenario, as long as Mr. Netanyahu is Prime Minister, Israel's policy toward Iran won't change.

For Mr. Netanyahu, the man who was assumed to be the once and future prime minister, the results are a stunning setback.

While Mr. Netanyahu's Likud party, in partnership with the Yisrael Beitenu party of Foreign Minister Avigdor Lieberman, captured some 31 of the Knesset's 120 seats, according to exit polls, this is 11 seats fewer than the two parties had going into this election, and not enough to give the Prime Minister the command needed in forming a majority coalition government of his choice.

Just two hours before polls closed, a worried Mr. Netanyahu implored his supporters to go out and vote.

"The Likud rule is in danger; I ask you to leave everything and go out now and vote," the Prime Minister wrote on his Facebook page. "It is very important to ensure the future of the state of Israel."

Once polls had closed, Mr. Netanyahu immediately put the best face on the results, thanking Israelis for re-electing him and pledging to form as broad a coalition as possible.

"I believe that the election results are an opportunity to make changes that the citizens of Israel are hoping for and that will serve all of Israel's citizens," the Prime Minister told a subdued crowd at his party's "victory" celebration. "I intend on leading these changes, and to this end we must form as wide a coalition as possible, and I have already begun talk to that end this evening."

Despite the bold words, however, it appears to be Mr. Lapid who is in the driver's seat.

Mr. Netanyahu, himself, was reported to be the first to call the evening's big winner, Mr. Lapid. "We have an opportunity to do great things for the country," Likud sources quoted the Prime Minister as telling Mr. Lapid. "The election campaign is behind us. Now we can focus on working on behalf of all of Israel's citizens."

"This shows that Lapid is the cornerstone of Netanyahu's coalition, if Netanyahu should indeed form it," said Israel Television commentator Nadav Peri. "Netanyahu has no coalition without Lapid."

Labour party leader Shelly Yachimovich and Tzipi Livni, leader of a new party known as Hatnua also called to congratulate Mr. Lapid and reportedly urged him not to side with the right-wing bloc, but to consider a coalition of the left and centre.

Even Shas, the ultra-Orthodox Sephardi party that stands most opposed to Mr. Lapid's policies of drafting the Haredim, said it was willing to sit in the same government as Mr. Lapid and his Yesh Atid party.

"Clearly a political drama is unfolding before our very eyes," said Erel Margalit, an influential venture capitalist and backer of Israel's Labour party on his Facebook page. "Yair Lapid will have to decide whether he really wants to change things and bring about a new form of politics with the Labour party, or whether he'd rather be Netanyahu's beard in exchange for cabinet portfolios."

The numbers make it clear.

The Israeli parties of the right – Likud, Yisraeli Beitneu and the Jewish Home – constitute some 43 seats in the 120-seat parliament.

Add to them the two Haredi religious parties (Shas and United Torah Judaism) that have been in Mr. Netanyahu's outgoing government, the Prime Minister can scrape together a coalition of 61 seats at best. As such, he would be vulnerable to every whim of any of the parties.

On the other hand, the parties of the centre and left – Yesh Atid, Labour, Hatnua and Meretz – make up some 50 seats.

Even with the addition of Arab Israeli parties, which never have been part of any Israeli government, the left bloc adds up to 59 seats.

In 2003, then Likud party leader Ariel Sharon formed a government similar to the one Mr. Netanyahu and Mr. Lapid are now considering. That earlier government contained Likud as well as Mr. Lieberman's Yisrael Beitenu party. It also included the National Religious Party (forerunner of Mr. Bennett's Jewish Home) and a party led by Tommy Lapid, father of Yair Lapid. The older Lapid, a former journalist and novice politician, was even more single-minded than his son about drafting the Haredim into the army. No ultra-Orthodox party would sit with him.

In Yair Lapid's speech to his party and all Israelis early this morning, he opened his remarks with reflections on his father and that election 10 years ago.

His father's party had received 15 seats in the election, and the family all jumped and screamed and hugged, he said. "Then we discovered that my father had remained sitting in his armchair and looked serious and thoughtful, almost sad."

The senior Mr. Lapid explained: "I just understood the weight of the responsibility that has fallen upon me," the younger Mr. Lapid recalled him saying.

"I didn't understand him at the time. I thought that he could rejoice a little before starting to deal with the weight of the responsibility that fell upon him, but I understand him tonight." 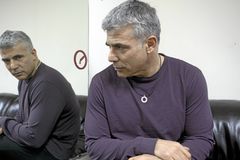 Voters in the city of Yokneam are looking to uphold the Israeli dream
January 18, 2013 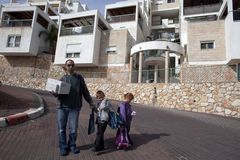