Leaving the door ajar for a hurry-up exit from Afghanistan, President Barack Obama, flanked by Britain's Prime Minister David Cameron, claimed the war was progressing well Wednesday even as he conceded that war-weary Americans wanted it to end.

Amid full-blown pomp and the staged bonhomie of a visit intended to reassure the British that some sort of special relationship still lingers, Mr. Obama offered only the most carefully qualified commitment to the current exit plan from Afghanistan.

"I don't anticipate at this stage that we're going to be making any sudden additional changes to the plan that we currently have," he said.

At a rare, and sun-filled, Rose Garden news conference with pink cherry blossoms prematurely blooming in the background, Mr. Obama said the U.S.-led NATO alliance waging a grinding counterinsurgency would reassess the exit strategy at a summit in Chicago this spring. The current plan has tens of thousands of U.S. troops pulling out this year as Afghan troops do most of the fighting and a full security handover to the Afghans by 2014.

On Iran, Mr. Obama disclosed he had sent Tehran's rulers a personal message urging talks to avert the looming confrontation over their nuclear ambitions. But he and Mr. Cameron stressed a common commitment to keep the Iranians from joining the nuclear-weapons club.

"On this, we are fully united – we are determined to prevent Iran from acquiring a nuclear weapon," Mr. Obama said. "Tehran must understand that it cannot escape or evade the choice before it." Either submit to international inspections that confirm no weapons program is under way, he added, "or face the consequences."

Mr. Obama has repeatedly said that those unspecified consequences could include military action, although he stressed "there is still time and space to pursue a diplomatic solution."

Dealing with Afghanistan in the wake of another atrocity that reignited Afghan outrage – the massacre of innocent women and children earlier this week by a U.S. soldier – was high on the leaders' agenda. Britain has the second-largest military contingent in Afghanistan, after the United States, and public support for the war is sagging, as it has in America.

"It's because we've been there for 10 years, and people get weary," said Mr. Obama, adding that he still believes "the vast majority of the American people and British understand why we went there."

As other allies, including Canada, have quit combat and France has moved up its exit date by a year, NATO faces yet another reassessment of the mission this May.

On another crisis front, Mr. Obama again rejected calls for a Libyan-style intervention in Syria.

"Our military plans for everything, that's part of what they do," he said. "But I was very clear during the Libya situation that [it]was unique."

Syria, he added, "is a extremely complicated situation. The best thing that we can do right now is to make sure that the international community continues to unify around the fact that what the Syrian regime is doing is unacceptable."

Given British angst that Mr. Obama was shifting America's focus to Asia, the Camerons' visit was full of ceremonial pageantry mixed with down-home fun. Bands played, there was a 19-gun salute for Mr. Cameron and his wife, Samantha. The two couples posed for a royal-like photo op, waving from a White House balcony. And Mr. Obama, an unabashed college basketball fan, flew his British guest on Air Force One to watch some March Madness hoops in Dayton, Ohio, where the Western Kentucky University Hilltoppers faced the Mississippi Valley State Delta Devils.

The U.S.-Britain relationship is the "strongest it's ever been," Mr. Obama said. And he gave the Prime Minister and his wife a fancy barbecue to take home. Mr. Cameron left a high-end table-tennis table for the White House.

Mr. Cameron even managed to joke about British troops torching the White House and the Capitol during the War of 1812.

"I am a little embarrassed, as I stand here, to think that 200 years ago my ancestors tried to burn this place down," Mr. Cameron said. "I can see you've got the place a little better defended today."

The visit has attracted wide attention among the American media, which often ignores the visits of foreign leaders unless they are contentious, like Israel's Prime Minister Benjamin Netanyahu, or there is a full-blown state event such as the dinner for India's Prime Minister Manmohan Singh.

Washington was unseasonably warm – 27 degrees Wednesday afternoon – and the A-list state dinner for the Camerons was moved outside to a huge tent on the south lawn of the White House.

Atrocity in Kandahar presents Obama with an opportunity
May 3, 2018 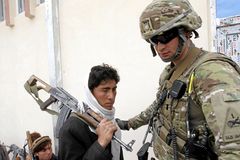