A sea of government supporters in red shirts rallied in Caracas on Friday to back a crackdown on migrants, smugglers and paramilitary groups that has triggered an increasingly bitter dispute between Colombia and Venezuela and led the neighbouring countries to recall their ambassadors.

The spat erupted a week ago when Venezuelan President Nicolas Maduro shut a major border crossing to combat what he says are rampant smuggling and paramilitary activities near Colombia, and declared a state of emergency in six western cities. Venezuelan officials deported more than 1,000 Colombian migrants and another 5,000 have left voluntarily, with some carrying all of their belongings across a muddy river on a frantic moving day.

On Friday, the United Nations High Commissioner for Human Rights called on both sides to work to resolve the crisis with an eye toward their obligations under international conventions, and put extra emphasis on Venezuela's responsibilities.

"We urge the Venezuelan authorities to ensure that the human rights of all affected individuals are fully respected, particularly in the context of any deportations," said Rupert Colville, spokesman for the UN High Commissioner for Human Rights.

A meeting of the two countries' foreign ministers on Wednesday failed to ease tensions.

Mr. Santos also called for an emergency meeting of the Union of South American Nations and the Organization of American States to discuss the "unacceptable" situation along the border, saying, "We want to tell the world what is happening." The country's Foreign Minister later underlined the request, but added that a break in relations with Venezuela was still unthinkable at this point.

On Friday, the Foreign Minister of Uruguay, which holds the organization's rotating presidency, said such a meeting would be difficult to arrange on short notice.

Mr. Santos's protests came hours after Mr. Maduro appeared on national TV in Venezuela and accused the Colombian President of undermining reconciliation efforts by telling lies. Until then, Mr. Maduro had centred his verbal attacks on Mr. Santos's arch-rival and predecessor, Alvaro Uribe.

Later Thursday, Venezuelan Foreign Minister Delcy Rodriguez announced the recall of her country's ambassador in Bogota, saying in a Twitter post that Mr. Maduro had requested the ambassador return for consultations about paramilitaries and other problems seeping into the country from Colombia.

Ms. Rodriguez said her country will "study our relations with Colombia deeply" given the aggressions Venezuela has suffered at the hands of paramilitaries and those seeking to do harm to the economy.

Recalling an ambassador for consultations is considered the diplomatic equivalent of lodging a complaint.

On Friday, thousands of government supporters snarled traffic as they marched to the presidential palace in support of the new measures and emphasized that they were gathering to support the security and integrity of Venezuela, not to demonize Colombian immigrants. Some waved signs saying "No to Colombian paramilitarism" as lively merengue music played and a carnival atmosphere reigned.

The Colombian rebel group FARC also issued a statement from Havana, where it is negotiating a peace deal, supporting Venezuela's actions.

Mr. Maduro says the crackdown is needed to stop smuggling gangs and Colombian paramilitaries from running roughshod over Venezuelan law. Some Colombian critics and government opponents inside Venezuela say the crackdown is an attempt by Mr. Maduro to distract attention from the soaring inflation and supermarket shortages the oil-rich country is experiencing.

The state-of-emergency declaration allows Venezuelan officials to search homes without a warrant and to break up public gatherings. Some departing Colombians have complained of abuses at the hands of the military in recent days, charges the administration denies.

With two border crossings closed, the underground economy has come to a halt, satisfying Venezuelan officials who have long blamed transnational mafias for widespread shortages, but also jeopardizing the livelihood of tens of thousands of poor Colombians who depend on the black market. 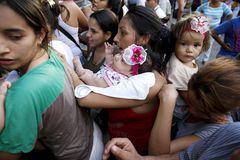