Followers of events in Syria will be well aware of the various fixes put forward by commentators and experts on TV, in newspapers and online.

But little, at least in English-language analysis, has emerged of what solutions Syrians themselves think would work best.

Below is a very small window into what Syrians see as solutions for ending the conflict.

Note: Many Syrians living in government-controlled areas and asked to contribute to this post declined out of fear of the regime. Others simply didn't r eply at all – in Assad's Syria, the fear of talking politics persists.

"In the absence of any political solution, the only way to end the conflict is a decisive victory by the opposition and this entails giving it the means of winning. The argument over the need for a 'political solution' is always nice to make or to hear, but it is in practice totally detached from reality and only serves to sustain the conflict.

"There have been countless opportunities for the regime to make some compromise and there are some segments of the opposition, such as the National Co-ordination Body or the Building the Syrian State, which are in favour of negotiating, but the regime has refused to make any concessions in more than two years. Western countries and societies have to overcome the Iraq war syndrome and their aversion to war. When Germany invaded France in World War II, Petain went for a political solution and De Gaulle for a fight. We know how it all ended.

"At the same time, the opposition needs to come forward with more inclusive plans for the Alawite community. Their attachment to the state system and to the military in particular is an issue that needs to be addressed much more seriously by the opposition. What will happen to the members of the military and security services after the fall of the regime must be explained loudly and in detail by the opposition and guarantees for the future interest of these segments of the regime must be taken into account. The security services must be disbanded but the financial interest, the salaries of their members, must be preserved one way or another for a certain period of time after the fall of the regime."

"The conflict is now very complex and the solution, in my opinion, is a series of actions that will take 10 years, if not more, to see through.

"There should be a meeting of all involved opposition parties that have influence on the ground. A straightforward, realistic set of 'goals to be accomplished' statement should be issued that should reflect an understanding of the current conflict, and not simply a repeat what has been said for the past two years. There should be an agreement that these goals are obtainable.

"Another step would be the blessing of opposition groups by neutral international forces that have been minimally involved in the conflict. The U.S. would be one, as well as Germany, Japan and Canada. Countries that have experienced civil war should also be involved in talks, focusing on the similarities between those countries and Syria.

"Technocrats who have been silent and uninvolved in the events of the past two years must be incubated and supported. There should be a building of the idea that technocrats in political power would stand as the best solution to the current mess and as the best guarantee for securing Syria's future.

"The last solution would see the natural fall of the regime due to internal weakness and further international boycotting."

"When a conflict carries on for as long as it has in Syria, it casts doubt on the righteousness of both sides. However, the regime was and is still not sincere in its attempt at reconciliation or dialogue. Each opportunity was used as a propaganda tool by the government and never achieved any real solution.

"While it is almost impossible to imagine the departure of the entire regime with all its elements and decades-old institutions, the departure of key elements and the inner circle is crucial in order to start talking about the possibility of reaching a middle ground where the cool heads from both sides can meet and agree to save what is left of the country.

"One of the most important steps in achieving a solution is that both sides turn to their people instead of seeking foreign support, that they declare a general amnesty, that they scrap their 'wanted' lists, that they come together and form a joint command, joint brigades and battalions, and eventually decide to be a national army whose primary goal is the protection of the Syrian people and the country. A solution similar to this was achieved in Lebanon, ending civil strife that lasted more than 15 years. Since the social fabric isn't that different in Syria, it can be achieved here, too.

"I do not see the revival of Syria in terms of a total loss for one side and an absolute victory for the other. The Syrian uprising started with people seeking dignity, equality, freedom and a country for all, but it cannot achieve these goals unless it accepts all segments of Syrian society, regardless of their political, social, confessional and other preferences."

"There is one last chance to save the Syrian state and avoid 'Somalization.' International parties apparently agree that the Syrian state and its institutions must be preserved, and that a ceasefire and dialogue on a managed transition to democratic elections should be established. Russia and Iran have a chance to preserve their interests in Syria by making a deal with the United States and other interested parties.

"This deal should include a military coup d'état led by pro-Iranian and Russian army officers against Bashar al-Assad and his family. Such a coup will prove to the Syrian opposition that there are parties inside the regime interested in a political solution. This plan should go alongside a UN-backed Arab League blue helmet force. This would be similar to the Arab Deterrent Force that was sent to Lebanon in 1976 to impose and supervise the ceasefire between different factions of the Lebanese civil war.

"This step would be important in order to prevent large-scale revenge attacks. Another task for these forces would be to ensure the safety and security of minority religions and those suspected of supporting the Assad government. Investigations into all the massacres should be initiated as should a 'National Preparatory Committee for Transitional Justice' to develop plans for accountability, reparation, reform and reconciliation in Syria." 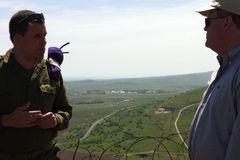