Talks between the Syrian government and representatives of rebel factions got off to a rocky start Monday after their first face-to-face meeting in Kazakhstan that marked a major shift in the war's dynamics and confirmed Russia's role as regional heavyweight.

The gathering in Astana, the Kazakh capital, is the latest in a long line of diplomatic initiatives aimed at ending the nearly 6-year-old civil war, which has killed hundreds of thousands of people and displaced half of Syria's population.

The talks are focused on shoring up a shaky cease-fire declared Dec. 30, not on reaching a larger political settlement. Syria's bitter divide was on vivid display as the delegates emerged from a closed, hour-long session marked by cold glances and sharp exchanges.

The head of the rebel delegation, Mohammad Alloush, had described Syrian President Bashar Assad's government as a "terrorist" entity. He called for armed groups fighting alongside it, including the Lebanese Hezbollah, to be placed on a global list of terrorist organizations, according to a video leaked by opposition delegates.

"The presence of foreign militias invited by the regime, most notably the Lebanese Hezbollah and the Iraqi Hezbollah ... contributes to the continuation of bloodshed and obstructs any opportunity for a cease-fire," Alloush said.

Such outfits were no different, he added, than the Islamic State group, which is excluded from the cease-fire.

After an opening ceremony, both sides split and did not meet face-to-face again. The meeting later concluded until Tuesday.

Still, it was a significant departure from past meetings, given the fact that Syria's government delegation sat opposite representatives of more than a dozen armed factions it describes as terrorists.

U.N. envoy Staffan de Mistura mediated the talks, which are to be followed by more negotiations in Geneva next month. A year ago, he was shuttling between government and opposition delegations in separate rooms in Geneva, in talks brokered by the U.S. and Russia that led nowhere.

The talks in Astana, a former Soviet republic, reflected the shifting dynamics in Syria since then, with Russia emerging as the main power broker and the U.S. relegated to the role of observer.

The Trump administration is not directly involved because of the "immediate demands of the transition," the State Department said Saturday. The U.S. ambassador to Kazakhstan, George Krol, attended Monday's session at the luxury Rixos President Hotel, a Turkish-owned chain.

"Th?e United States remains committed to a political resolution to the Syrian crisis, which can bring about a more representative, peaceful, and united Syria, free of terrorism and extremism,?" said State Department spokesman Mark Toner.

The two sides were brought to the table by Russia and Iran, which have provided crucial support to Assad, and Turkey, a leading sponsor of the opposition. Turkey, whose president is embroiled in troubles at home, has recently improved ties with Moscow, raising hopes for a breakthrough.

A political figure from the Army of Islam, a Saudi-backed group once singled out by Moscow as a terrorist group, leads the opposition delegation made up heavily of rebel factions, also a first.

But the Syrian parties remain deeply divided on almost everything, including who is to blame for repeated cease-fire violations, and whether it should apply to the al-Qaida-linked Fatah al-Sham Front, which fights alongside mainstream rebel factions.

Ja'afari accused the opposition of "misinterpreting the idea of the cessation of hostilities," and defended a government offensive in the Barada Valley outside Damascus. The fighting there has cut off water to millions of the capital's residents for a month.

The government, which has always portrayed the conflict as a war on terrorism, is hoping to win international support and potentially recruit rebel factions to help it battle extremist groups. Cabinet minister Ali Haidar told The Associated Press in Damascus that the talks would "test intentions" on the cease-fire.

The rebels are bitter over a string of territorial losses, including last month's defeat in Aleppo, Syria's largest city and former commercial centre. Russia, with its massive air power, and Iran, with thousands of Shiite militiamen in Syria, turned the war unequivocally in Assad's favour.

With little room to manoeuvr, rebel groups, particularly those beholden to Turkish assistance and those operating in northern Syria, agreed to send representatives to Astana.

The opposition delegation accused the government of undermining the talks to pre-empt any discussion of a political transition.

Issam al-Rais, a representative of a rebel faction in southern Syria, said there would be "no need to go further (to discuss) a political transition" if the cease-fire could not be strengthened. He said opposition factions were discussing mechanisms to verify cease-fire violations with Turkey and Russia.

Yahya al-Aridi, a spokesman for the rebel delegation, said the opposition had a "productive" meeting with Russian and Turkish representatives in Astana, in the presence of de Mistura. He said the talks would conclude Tuesday.

Russia's official news agency Tass said the final document for the talks is to call on Syria's rebels to distance themselves from Fatah al-Sham, an al-Qaida-linked group in Syria. Tass added the three countries would confirm their determination to jointly fight the Islamic State group and Fatah al-Sham.

The group works closely with other rebels and has called the meeting a "conspiracy" designed to divide the insurgents.

Syria's conflict began with an Arab Spring-inspired uprising against the Assad family's four-decade rule and escalated into a civil war after the government violently cracked down on dissent and the opposition took up arms. The fighting is estimated to have killed more than 400,000 people since March 2011.

In past talks, the rebels have insisted Assad step down as part of any peace plan, but his fate is not up for negotiation in Astana. In another departure, the opposition delegation is mainly drawn from armed groups, not civilian organizations.

Iran's Foreign Ministry spokesman said preserving the cease-fire will be "the most important issue" on the agenda, and that Tehran hopes the talks can pave the way for the delivery of humanitarian aid.

Bahram Ghasemi suggested that discussions of a larger political settlement would have to wait. "Let's wait and see how the process can be continued based on conclusions that will be announced Tuesday."

As the Astana talks continued, Moscow and Washington engaged in a public dispute Monday over whether the U.S.-led coalition was now working with the Russian military in Syria.

That claim was almost immediately denied by the U.S. military.

U.S. Navy Capt. Jeff Davis, a Pentagon spokesman, said the U.S. does have routine "deconfliction" talks with Russia to avoid unintended aerial incidents in Syria's crowded skies. But Davis says there have been no changes to that arrangement, and the U.S. has insisted for months that it has no co-ordination or sharing of targets with Russia.

Later in the day on Monday, White House spokesman Sean Spicer said new U.S. President Donald Trump was willing to work "with Russia or anybody else" to defeat IS. 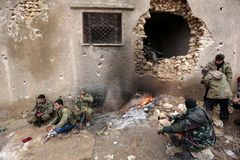