The second presidential debate, brutal and degrading though it was, felt almost anticlimactic, even after Donald Trump vowed that he would appoint a special prosecutor to investigate Hillary Clinton if he were elected president.

Mr. Trump won't be president. A campaign that was already in eclipse is in collapse, thanks to Friday's release of a 2005 tape in which Mr. Trump boasted of being able to get away with molesting women because he was so famous.

In response, dozens of Republican congressional candidates said they will no longer vote for Mr. Trump, and many urged him to quit. Any hope of staying within the Republican tent depended on an act of honest contrition by Mr. Trump Sunday night.

Read more: Catch up on what you missed from the Clinton-Trump debate

But Mr. Trump doesn't do contrition. Instead, he doubled down by sitting down with Juanita Broaddrick, Paula Jones and Kathleen Willey, women who accused Bill Clinton of sexual assault or harassment. A fourth woman present was Kathy Shelton. Ms. Clinton was the court-appointed lawyer who defended her accused rapist.

That stunt will probably prove the final straw for a Republican Party leadership furious over the revelations on the tape. Mr. Trump is about to lose some or all of the Republican party's funding and organizational support.

Mr. Trump doesn't care. He'll run as an Independent Republican, or whatever you want to call it. He'll lose. Strangely, somehow, it doesn't seem to matter, so macabre have things become.

The unproven allegations of harassment, sexual assault and rape against Mr. Clinton go back decades, and have, in recent years, been mostly litigated in alt-right forums such as Breitbart News.

But now, in the election campaign that Mr. Trump is treating like a reality show with him as host, their accusations are once again front and centre, because Mr. Trump put them there.

Not long after the debate began, he launched in. After dismissing the tape as "locker-room talk" and admitting "I'm not proud of it," he counterattacked, declaring: "there's never been anybody in the history of politics in this nation that's been so abusive to women" as Bill Clinton. And because Ms. Clinton called Mr. Trump out over the tape after what he alleged her husband had done, "I think it's disgraceful and I think she should be ashamed of herself if you want to know the truth."

Later, he interjected that if he were in charge, "you'd be in jail" because of the deleted e-mails from her private server.

And later: "She has tremendous hate in her heart."

One can only imagine how the party leadership responded to all this. Mr. Trump depends on the Republican National Committee for funding and for on-the-ground organization at the state level. Some or all of that support will evaporate, now. But Mr. Trump knew that when he chose this path. He has already written the party off because the party has written him off. At one point, he even repudiated the opinion of Mike Pence, his vice-presidential candidate, on the Middle East. He also repeatedly accused the debate moderaters of being biased against him.

Ms. Clinton's rebuttal was what you'd expect. The tape was shocking not because it was so out of character, she said, but because it was so in character. It was of a piece with attacking the Khan family, whose son was killed in Iraq, because they were Muslim; with ridiculing a reporter with a disability; with accusing an American-born judge of bias because of his Latino heritage; with disrespecting prisoners of war because they let themselves get caught.

It's foolish to talk about who won the debate. Mr. Trump kept his energy levels up this time; Ms. Clinton pressed the indictment that Mr. Trump is temperamentally unfit to be president. Each tried to diminish the other; both probably succeeded.

But the debate was simply the capstone of three tumultuous days that, unless the laws of political physics no longer apply, rendered Mr. Trump unelectable. What he said on the tape was reprehensible. His own party is abandoning him.

But perhaps becoming president is no longer what all this is about for Mr. Trump. Perhaps it's about preserving the brand, whatever that brand is, and protecting it for the future, whatever that future might be.

The brand, apparently, can withstand a tape of vile sex talk. It cannot withstand an honest apology. And the funny thing is, we all get that. 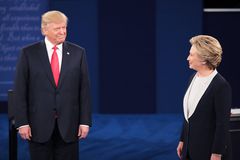