There was chaos at the frontiers of the European Union on Wednesday – and growing questions over the unity of the 28-nation bloc – as Hungarian police used tear gas and water cannons to repel crowds of asylum-seekers who attempted to breach a newly constructed fence along the border between Serbia and Hungary.

Helmeted riot police, backed by military vehicles including Humvees mounted with guns, formed a line on the Hungarian side of the frontier to block the refugees from proceeding further north. The crowds tore down a razor-wire fence on the Serbian side of the border, then approached the closed Hungarian side chanting "Open the gate!" and "Germany help us!"

As they attempted to bring down the second fence, clouds of tear gas were released, driving them back. Then several young men among them began throwing rocks and bottles across the border into Hungary.

At one point, several women moved to the front, holding babies and small children in the air to demonstrate they pose no threat in their efforts to push toward the better lives they believe await them in countries like Germany and Sweden. But the act failed to ease the tense standoff.

Twenty people were injured in the melee, including two children who had been thrown over the border into Hungary.

Aid workers at the scene said many more would-be refugees – some of whom camped for the night in tents pitched at the foot of the Hungarian fence – were stuck Wednesday night in "a no man's land" between the Serbian and Hungarian borders. "Hundreds of the most vulnerable people are now stuck between razor wire and the abyss of not knowing what comes next," said Tirana Hassan, director of crisis response at Amnesty International.

The Hungarian government has come under growing international criticism for its handling of the months-long refugee crisis. "I was shocked to see how these refugees and migrants were treated; it's not acceptable," United Nations Secretary-General Ban Ki-moon told a news conference in New York on Wednesday. "All the countries have their domestic problems, but since they are the people fleeing the wars and persecutions, then we must show our compassionate leadership."

Though few among the hundreds of thousands of people who have arrived in Europe this year have professed a desire to remain in Hungary, Prime Minster Viktor Orban said his country was protecting its "way of life" against the refugees, whom he said were not in any danger in Serbia, but instead seeking economic opportunities in Germany. His spokesman, Zoltan Kovacs, referred to the group as an "armed mob."

The Hungarian government said the recently completed fence along the 175-kilometre border with Serbia could be extended to cover the country's much longer border with Romania, as refugees seeking to get around the fence began entering Hungary from that direction.

Romania, like Hungary, is a member of the EU, though it is not a member of the visa-free Schengen area that most of the refugees are desperate to reach. Romania summoned the Hungarian ambassador to Budapest to complain that talk of a border fence "contravenes the European spirit."

Hungarian MP Bence Tuzson also warned that crossing the country's border illegally was a crime, and said asylum applications filed in Hungary were likely to be rejected. An Iraqi man on Wednesday became the first person convicted of illegally crossing into Hungary. Local media reported he would be expelled form the country and banned from returning for one year.

Serbia also protested "in the strongest terms" over the use of force against those trying to cross from Serbia into Hungary, while Hungary complained of a lack of co-operation from the Serbian side in restricting the flow of migrants.

Serbia has said it will not accept refugees pushed back into the country by Hungary, and has warned it could deploy its own army to the border area. "We will not allow anyone to humiliate us. I call on the European Union to react, for its members to behave in line with European values," Prime Minister Aleksandar Vucic told Serbian state television. "If the EU does not react, we will find a way to protect our borders and European values as well."

Thousands of refugees also began streaming from Serbia into Croatia, another EU member outside the Schengen area. The Croatian government said it would allow them to freely pass, perhaps opening a route around Hungary – via tiny Slovenia – into Austria, and then to Germany beyond.

A group of Afghan refugees who arrived Tuesday in Belgrade after crossing by sea from Turkey to Greece, and overland via Macedonia, told The Globe and Mail they were headed imminently for the Croatian border.

"No one will block them, no fences," Croatian Prime Minister Zoran Milanovic said Wednesday.

"It doesn't matter what religion or nationality they are or the country where they would like to go to," he wrote on Twitter. "These people are here, they want to work, to create. They don't want to come to Croatia nor Hungary, but they will be able to pass through Croatia."

The journey, however, is a potentially perilous one, as the overland route from Serbia into Croatia is still littered with landmines laid during the Balkan wars of the 1990s. Croatia's Mine Action Centre said 500 square kilometres remain uncleared, though the areas are clearly marked.

The Médecins sans frontières (Doctors Without Borders) group warned that "refugees may inadvertently stray into Balkan minefields in search for ways round new border restrictions."

Slovenia said it would enforce EU rules and require new arrivals to register their asylum claims there, rather than simply allowing them to pass through. European Commission President Jean-Claude Juncker has called for refugees to be registered at their point of first arrival in the EU, and then shared among all 28 member states according to a quota system. However, Hungary, Poland, Slovakia and the Czech Republic have all said they would not accept refugee quotas imposed by Brussels. Denmark, Ireland, and the United Kingdom are also allowed to opt out from the plan under their EU accession treaties.

German Chancellor Angela Merkel has called for other EU members to help share the burden thrust on Germany, which is seen as the dream destination by many refugees because of its strong economy and welcoming asylum polices. The German government has temporarily suspended train service from Austria, in an effort to stem a tide that has already brought nearly 500,000 asylum-seekers into Germany this year. 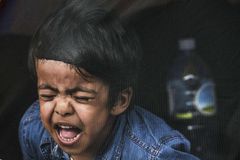 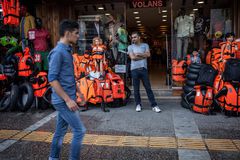