President Barack Obama’s much-hyped “pivot” to the Pacific, supposedly shifting U.S. foreign policy and military focus away from the Middle East to face the emerging strategic challenges posed by China, has, so far, not amounted to much: a few hundred Marines stationed in Australia, ramped-up military exercises with the Philippines, more bombers deployed to Guam.

Wang Wei daringly jockeyed his Chinese warplane close to the lumbering U.S. spy plane high above the South China Sea in disputed air space. He had done it before, once flying so close that the Americans could read his e-mail address on the jeering sign he held up. This time, the high-stakes game of intercept and scare went badly wrong.

The sleek Chinese Shenyang J-8 slammed into the big, four-engined U.S. Navy P-3, crippling both aircraft. Commander Wang’s cockpit was crushed as it smashed into the far larger U.S. aircraft and the Shenyang plummeted into a death spiral. On board the stricken U.S. spy plane, its 24-year-old pilot, Lieutenant Shane Olson, managed to regain control of the upside-down and diving EP-3. He ordered the crew of 23 to start destroying highly classified signals interception electronics and headed for an emergency landing at a military airfield on China’s Hainan Island.

There, the tense standoff in April, 2001, became the first grave crisis for newly elected President George W. Bush and soured Sino-American relations for years including a complete break in military exchanges.

High-risk confrontations continue, both at sea and in the air.

In March, 2009, Chinese warships and fighter-bombers repeatedly closed in on the U.S. spy ship Impeccable about 110 kilometres off Hainan in what the Pentagon called aggressive harassment. Last August, another Chinese warplane veered less than 10 metres from a U.S. Navy P-8 spy plane.

Both nations keep raising the stakes and the risk of military confrontation. In 2013, China declared exclusive control over airspace above the uninhabited Diaoyu Islands – long contested and known in Japan as Senkaku. Days later, President Barack Obama’s response was to send not a vulnerable intelligence gathering aircraft, but a pair of huge B-52 bomberson an unannounced, no-permission-sought sortie, directly through the heart of Beijing’s latest East China Sea claim.

Mr. Obama upped the ante again this month, saying the treaty binding the United States to go to war to defend Japan “covers all territories under Japan’s administration, including the Senkaku Islands.”

But in recent months, Mr. Obama has seemed willing to go beyond rhetoric and symbolism. He has rallied China’s regional rivals, reaffirmed the United States’ hard pledges to defend Pacific allies and started to paint some red lines in the seas Beijing regards as its own.

U.S. warships and aircraft may soon be crisscrossing the South China Sea, deliberately ignoring the 12-nautical-mile lines that could be claimed as territorial waters should Beijing attempt to assert full sovereignty over the islands it is creating from reefs and rocks, according to senior defence officials.

Predictably, Beijing has responded with its own tough talk.

“Freedom of navigation certainly does not mean that foreign military ships and aircraft can enter another country’s territorial waters or airspace at will,” Hua Chunying, China’s foreign ministry spokesperson, said in response to reports that Defence Secretary Ash Carter had ordered up options for sending U.S. warships and aircraft into the area.

Testing Beijing’s tenuous and contested claim to the South China Sea seems precisely what Mr. Obama intends to do. He has dispatched Secretary of State John Kerry to Beijing this weekend where the message is expected to be unambiguous, that the United States won’t accept Chinese maritime expansionism. Whether the President is willing to back up the reddish lines in the sea with the military might of the world’s sole remaining superpower remains uncertain.

Mr. Obama has accused China’s Communist regime of bullying in the South China Sea. “Rather than resolve these issues through normal international dispute settlements, they are flexing their muscles,” he said, adding: “That’s the wrong way to go about it.”

The President has lined up China’s major regional rivals.

After a lavish visit to India in January, Mr. Obama and his host, Prime Minister Narendra Modi, issued a joint statement pointedly challenging Beijing’s maritime grab. “Regional prosperity depends on security. We affirm the importance of safeguarding maritime security and ensuring freedom of navigation and over flight throughout the region, especially in the South China Sea,” it said.

Mr. Obama upped the stakes last month when the leader of China’s other regional rival, Japanese Prime Minister Shinzo Abe, came to Washington. Standing shoulder-to-shoulder with Mr. Abe in the Rose Garden, Mr. Obama pledged that the U.S. defence pact with Japan covered even tiny islets in the East China Sea. And he issued a more general warning about Beijing’s broader sea claims.

“There are some real tensions that have arisen with China around its approach to maritime issues and its claims,” Mr. Obama said.

For years, the Pentagon has sent one of its mighty naval battle groups – a nuclear-powered carrier backed by up to a dozen guided missile cruisers, destroyers and frigates – into the South China Sea usually once a year.

Upping the pace of those forays along with more frequent joint military exercises with allies, such as the Philippines, in the South China Sea offers one way of challenging Beijing’s strategy of incremental sovereignty.

Last month, U.S. Marines stormed ashore alongside Filipino troops in a mock invasion dubbed Balikatan, which means “shoulder-to-shoulder” in Tagalog; it was the largest joint military exercises in at least 15 years.

The message was clearly directed at Beijing.

“The U.S. is committed to its alliance … and the U.S. will defend the important principles of freedom of navigation in the air and the sea,” said U.S. Ambassador Philip Goldberg as 15,000 U.S. and Filipino soldiers, sailors and airmen launched Balikatan.

China’s huge island-building campaign has imparted a new sense of urgency. “We must do something quickly lest the massive reclamation results in the de facto control by China of the South China Sea,” Philippine Foreign Secretary Albert Ferreros del Rosario told Washington’s Center for Strategic and International Studies.

In what may prove to be a far more controversial move, Washington is also urging non-allied Asian nations, like Vietnam, Malaysia and Brunei, to collectively assert freedom of navigation of the seas and – in effect – challenge Beijing with joint naval patrols in the South China Sea.

In March, Vice-Admiral Robert Thomas, commander of all U.S. naval forces in the Western Pacific, told a gathering of the 10-nation Association of Southeast Asian Nations leaders that joint maritime patrols in the South China Sea would have the backing of the U.S. Navy.

“If ASEAN members were to take the lead in organizing something along those lines, trust me, the U.S. 7th Fleet would be ready to support.” Admiral Thomas said. 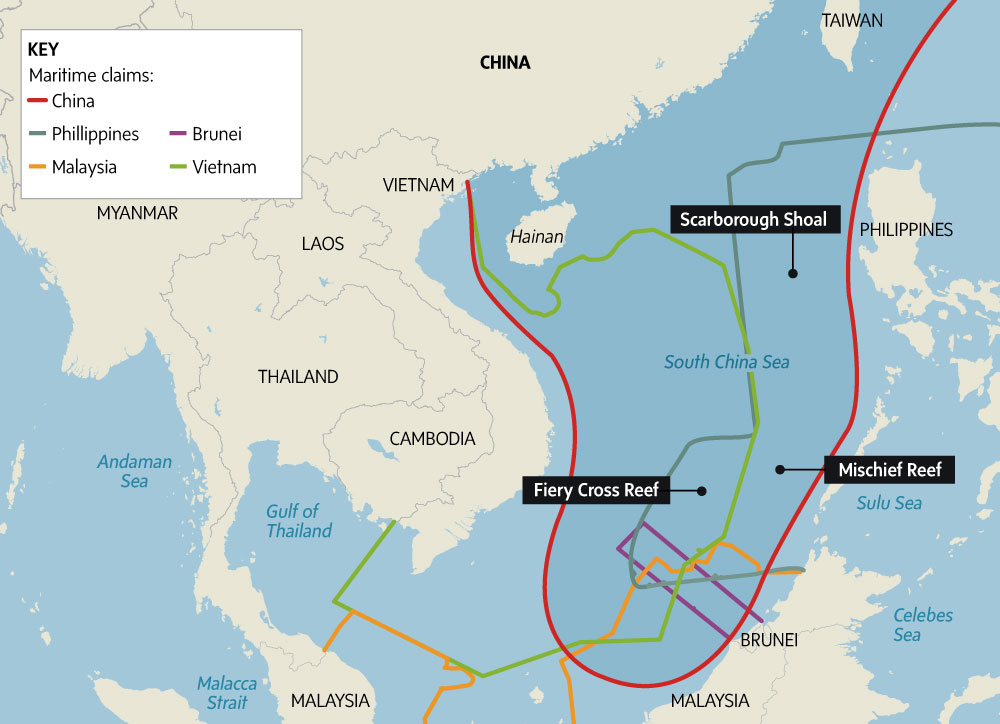 Backed by bulldozers, bullying and bluster, Beijing’s Communist government is asserting ambitious claims of almost all of the South China Sea, a vast swath of ocean along with huge oil and gas reserves beneath the seabed.

The so-called “Nine-Dash Line” cuts across the claims of smaller nations and amounts to an effort by Beijing to exert control over vital trade routes and rich fishing grounds.

Confrontation looms, not just with China’s weaker Asian neighbours but, more dangerously, with the United States as Barack Obama’s Pacific pivot forces an inevitable clash between the rising dragon’s aspirations to great power status and the role of the world’s sole remaining superpower in the 21st century.

China is busily island building, seeking to transform reefs and outcroppings into pillars for a vast claim to all of the South China Sea.

Fiery Cross Reef, transformed by Chinese bulldozers and a mountain of yuan, into a runway capable of handling fighter bombers and a harbour good for gunboats is just the latest bizarre bit of island building in the South China Sea.

A patchwork of overlapping and irreconcilable claims from half-a-dozen nations has turned the rich and densely travelled ocean, bounded by China, Vietnam, the Philippines, Malaysia, Taiwan and the tiny Sultanate of Brunei, into a nastily contested maritime flashpoint.

An estimated $5-trillion (U.S.) in ship-borne trade traverses the South China Sea’s vital sea lanes and roughly 10 per cent of the value of global fisheries is hauled from its warm and reef-infested waters.

The Paracel Islands, occupied by China, are claimed by Vietnam and also by Taiwan.

Scarborough Shoal, with its rich fishing grounds, is claimed by the both the Philippines and China and is the site of a long-running standoff. China seized the shoal in 2012 and has fired water cannon at Philippine fishing vessels. In February, an armed Chinese coast-guard ship rammed three Philippine trawlers, sparking a nasty exchange of diplomatic notes.

Manila also accused Beijing of “destructive and illegal activity” in violation of the UN Convention of Biological Diversity for dredging giant clams from the lagoon where harbour building is under way.

Sometimes the confrontations escalate beyond undiplomatic notes. China’s armed coast-guard vessels have fired water cannons at Vietnamese trawlers and there have been repeated instances of collisions.

Complicating matters is the web of mutual defence treaties – essentially pledging the United States to go to war alongside some, but not all, of the smaller countries being bullied by China.

Both Taiwan and the Philippines are protected by a pact obliging the United States to attack China if they are attacked by China. The U.S. has similarly binding treaties to protect South Korea and Japan.

An aerial photo taken though a glass window of a Philippine military plane shows the alleged on-going land reclamation by China on Mischief Reef in the Spratly Islands in the South China Sea, May 11, 2015. (REUTERS)

By contrast, no such pacts require Washington to stand up for Vietnam, Malaysia, Indonesia or Brunei but the United States has articulated a clear and compelling self-interest in keeping the South China Sea open for shipping.

China insists the line is legitimate, reflecting both long and modern reality.

Whether the claim would meet the far more rigorous requirements of the 1982 United Nations Convention on the Law of the Sea (UNCLOS) is more doubtful.

All of the nations with overlapping claims (except Taiwan) are signatories to UNCLOS.

Imposing its maritime will by backing its claims with new islands, bigger gunboats and threats may be Beijing’s long-term strategy to turn the South China Sea into a Communist-controlled lake.