Hopes were raised for an end to Syria's long and brutal civil war as the United States and Russia announced this past weekend a semi-secretive plan for a countrywide ceasefire that would lead to a political settlement.

But even the best-laid plans must pass muster with the people and forces on the ground, and this tenuous scheme could well come up short.

The plan calls for a series of 48-hour ceasefires to be observed by fighters on both the government and rebel sides, during which rebel fighters are to separate themselves from the Islamic State forces as well as from the fighters of the al-Qaeda-linked Nusra Front, now known as Jabhat Fateh al-Sham. All the while, the United States and Russia are to work out the logistics of joining forces to battle those two extremist jihadi groups. Only then is any real attention likely to be given to negotiating a political solution to Syria's hard-fought conflict.

However, holding peace talks hostage to this ceasefire gives every fighting force on the ground – rebel or government – a veto over the process. Just one rebel attack on a government position, for example, could draw Syrian, Russian or Iranian fighters into battle and the whole process would come undone. And hundreds of tiny rebel groups are fighting across the country.

Rebels rejected a 2012 plan proposed by the United Nations Secretary-General to have an interim authority guide Syria to multiparty elections because the authority could have included the hated Syrian President Bashar al-Assad.

Four years later, there are good reasons the rebels could well reject this new plan, too.

Rebels resent the fact that the deal was negotiated by Russia and the United States with no participation by rebel leaders and little, if any, input from them. Most leaders haven't even seen the "five documents" that have been agreed upon by the two big powers – they are being kept secret.

They resent also that the announcement of the plan came as a surprise, at least to the rebel side. No sooner was the deal proclaimed, than the Syrian regime and its Russian and Iranian allies hit hard at rebel positions in the Aleppo and other areas, so they could capture as much territory as possible before the truce comes into effect late Monday. Rebels were caught unprepared for this.

They begrudge that two of the most effective rebel groups – the Islamic State and Jabhat Fateh al-Sham – are being declared enemies and that the other rebel groups in the Free Syrian Army are expected to have nothing to do with them, except to turn their guns on them. Jabhat Fateh al-Sham, in particular, has been an integral part of the struggle against the Assad regime and the Islamic State has kept thousands of Syrian troops busy in eastern Syria where the group has captured numerous areas.

They also dislike that if the process should reach the stage of peace talks, rebel leaders will have no say in the structure of those talks. For example, it seems likely that Mr. al-Assad will be part of an interim authority, something to which the rebels and many Syrians object.

Rebel leaders worry, too, about the one-sided enforcement of the truce: If rebel fighters violate the ceasefire, for example, they can expect Russian troops that side with the regime to come down hard on them. But if government troops break the ceasefire, don't expect the United States to punish the offending government forces. It will be up to the rebels themselves to police their own truce.

They are concerned that the already powerful regime side will be better able to use the period of a truce to bolster its defences and refill its armouries. The rebels, on the other hand, weakened by the loss of the two jihadi organizations, will have fewer means of rearming.

Turkey's recent incursion into northern Syria could have been a source of encouragement to the country's rebel forces – Turkish President Recep Tayyip Erdogan is an avowed enemy of Mr. al-Assad.

However, the entry of Turkey's forces appears to have been co-ordinated with U.S. officials and even with the Russians, and it appears directed more at keeping Kurdish fighters confined to two small territories in the northeast and northwest, not allowing them to unite along the northern border with Turkey.

Rebel leaders are especially wary about the real motives behind the U.S.-Russian collaboration. The whole process appears to have more to do with forming their own alliance and fighting the Islamic State than it does about ending the civil war in Syria. And, at the end of the day, Russia still will be standing shoulder to shoulder with the Syrian regime. The same cannot be said about the United States and the Syrian opposition.

All in all, Syria's rebels are unlikely to support this ceasefire plan for very long. 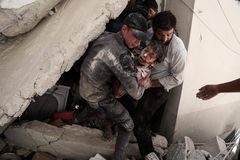